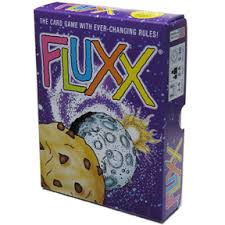 THIS GIVEAWAY IS NOW CLOSED!  The lucky winner is Susan.  Please contact me by Thursday, Jan 3, 2013 with your details.

If you look around for reviews of Fluxx, you’ll probably come away a little baffled:  is it a good game, or not?
Mine’s another review that’ll probably baffle you.  I don’t know if I like this game or not, and yes, I have played it quite a few times.  It’s a WEIRD game.  And many people like it, including some of my children.  Some don’t; that’s just the way this game is.
Last week at the homeschool drop-in, five parents were sitting around for two hours playing this game.  It’s weirdly addictive that way; only one knew the game before they started playing, and fifteen minutes later, they all still needed quite a bit of coaching, but they were thoroughly hooked.

Growing up, we had a board game called Bonkers.  Billed as “never the same game twice!” you played by putting down little cards along a fairly typical-looking board-game “track”.  Because you could play different cards each time you played, and switch around cards as you played, the track would change and you might wind up winning or losing because of this swift turnabout.
Fluxx is like that – it’s never the same game twice.
Except that, with Bonkers, you had to accumulate a number of points to ultimately win the game.  In Fluxx, you can win or lose in an instant, seemingly at random.  And some people don’t like that.  You don’t necessarily win based on skill or strategy – in fact, strategizing almost seems kind of useless, because everything about the game – every single rule, including the goal of the game – could change in an instant.
When we played it at the cottage, some of the big people liked it and some of the little people liked it.  One of my sisters seemed to get really mad at it – that’s just the way the game goes sometimes.  The nice thing is that you can pretty much play this with people of any age, although you’ll need an adult or big kid to be in charge and ensure that all the rules that have been played actually get followed.  When little kids play, the randomish weird things they sometimes do won’t actually ruin the gameplay for everybody the way it might in some games.  You’ll probably want to wait until they can read comfortably before letting them play.
So here’s what the game involves:
Essentially, there are three kinds of cards:  rules, goals, keepers and actions.  You start playing with one basic rule that everybody does on their turn: draw one card, play one card.  Playing new Rule cards can change the number of cards you draw, play, or insert another complicating element into the gameplay.  Initially, there is no goal – so nobody can win.  But on your turn, if you draw a Goal card and play it, that becomes the goal of the game… until the next person changes it.  Keepers are usually “nouns,” like Bread or Chocolate, that lie inert on the table in front of you until such time as you need them to win.  Goals usually involve having some combination of two Keepers (for example, “Milk and Cookies”; the person with those two Keepers in front of them would win if this became the goal).  Oh, yeah, and Action cards shake things up in case you’re becoming a bit complacent.  So that’s the game!  Confused?  Luckily, it all becomes fairly clear once you start playing… well, eventually. 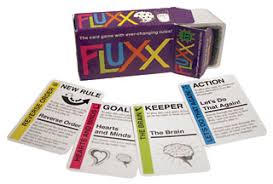 Here’s even better news!  Looney Labs, the makers of the Fluxx core game and many different “versions” of Fluxx (such as Zombie Fluxx and Eco-Fluxx) have also released a Jewish Fluxx Expansion Card Pack that turns gameplay into a kind of Jewish experience.  I like this part of the game very much.  The Jewish expansion pack includes three new Jewish-themed goals (like Torah Study, which requires the Brain and Torah Keepers), several Jewish-themed Keepers, along with a “Judaica Bonus" Rule (I think it’s an extra turn if you’re wearing a Chai or Magen David) and “Hebrew Knowledge” Action card, which gives you extra turns if you can name and spell a Hebrew word (in Hebrew).  The Goals are the best part about the expansion set, and we’re always delighted to find them. 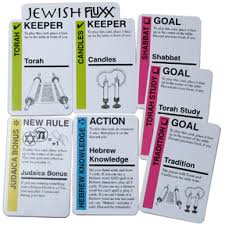 So here’s how you can win all of this – a full set of Original Fluxx, along with the 7-card Jewish Fluxx Expansion Pack (if you want it; if you’re not Jewish, you can choose not to receive it… but who wouldn’t want a cool, limited-edition Torah Keeper???)!
The Rafflecopter is here! Follow these instructions and it will tell you what to do!
a Rafflecopter giveaway