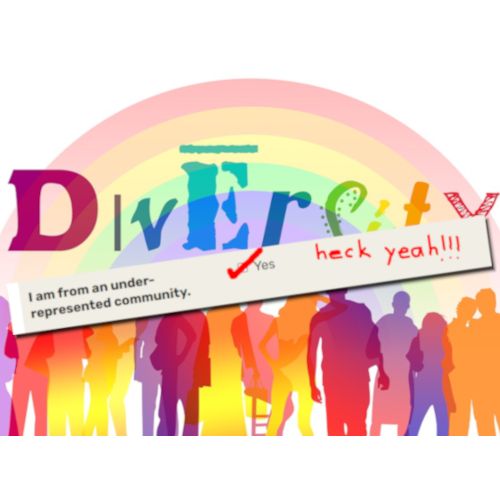 I applied for a writing award yesterday. I'm not going to get it, but that's not what I wanted to share with you.

I stared at this box for a long, long time. And then I decided not to check it. Even though I believe people like me truly are underrepresented, we probably wouldn’t fit the definition in other people's minds.

Well, because we're European.
Because we are white.
Because as everybody knows, Jews control the media. (do we???)
If anything, some people say, Jews are over-represented in publishing.

Some definitions are careful not to include people like me. Like this random definition from the State of California which defines underrepresented for some very specific business purposes as: "an individual who self-identifies as Black, African American, Hispanic, Latino, Asian, Pacific Islander, Native American, Native Hawaiian, or Alaska Native, or who self-identifies as gay, lesbian, bisexual, or transgender."

Sorry, I self-identify as an Israeli-Canadian Ashkenazi Jew. Any room for me on that spectrum?

According to Wikipedia:
“An underrepresented group describes a subset of a population that holds a smaller percentage within a significant subgroup than the subset holds in the general population.”

As of 2019, Jews are only 0.2% of the world population. Even that sounds super-high and probably includes many, many Jews who'd be surprised to hear they'd been counted. But thinking of all the books I’ve seen and read in my life, including children’s books, I would say far fewer than two in a thousand characters were recognizably Jewish. Mayyyybe…

Then again, in the U.S., according to the latest Pew polls (which, again, include Jews who’d probably be surprised to hear that they are classified as Jewish), Jews comprise 2.4% of all U.S. adults. Are two (point four!) in a hundred people in every American picture book you pick up Jewish? Every graphic novel? Every middle-grade novel? And let’s be clear: I mean the kind of Jewish you can pick out from a crowd; the kind of Jewish where the home, practices, child’s behaviour are notably different from their peers’ simply because of being Jewish. Seems like we’re underrepresented for sure.

Yet I've been told repeatedly that

as an Ashkenazi Jew, I have to step aside and let other people claim their diversity and speak up for THEIR underrepresented culture.

And yes, I have been told that literally. More than once.

I once applied for a scholarship to a children's writing program based on financial need and being a middle east person and a person from an underrepresented Orthodox Jewish background. And got a call from the director of the program, very excited to find out more about me to make sure I qualified. Their voice dripped with disappointment when they found out I wasn’t actually a person with an interesting ethnicity or culture they could help out.

I can't call the director antisemitic, considering they're Jewish themselves. (Can I?)
That person probably envisions themselves lifting OTHER people up... not their own people. Their own people are doing just fine, thank you.
I wonder if that person has been to Israel and seen what Jews truly look like.
I wonder if that person has ever tried to find high-quality children's books that reflect an Orthodox Jewish perspective.
From a mainstream publisher.

What's that -- never?
Oh, yeah. We really are underrepresented.

But. But. But what about all those glittering blue-and-white Chanukah books out there? Isn't there an Elmo Rosh Hashanah book? Surely Jews should take what they can get and be happy and shut up about it?
Yeah, no.

I can't help wondering, for instance, if a white European Muslim would have checked that box. I strongly suspect they would have. And I would support that because, as a Jew, my liberal heart bleeds for underrepresented and minority people. Someone Lithuanian or Bulgarian or heck, Polish Muslim. The Lipka Tatars, who have been in Poland since the 14th century -- unlike my family, who were probably there since around the year 1048. Maybe that extra 300 years was enough to make my family truly white.
Truly Polish.
Truly European.
Truly privileged, as opposed to a minority, an underrepresented person whose voice deserves to be heard.

Because the thing about privilege, we're told, is that if you have it, you can't see it.
I walk into a store with my white face and security guards don't follow me around to make sure I don't shoplift.
My husband doesn't get pulled over for driving through a white neighbourhood.
I don't have to train my kids to put their hands up if they encounter a police officer.

That certainly makes me privileged.

So why do I flinch when the world alternately tells me to go back where I came from AND to get out of my ancestral homeland?
Or simply to shut up, quit making so much noise, and blend in like everybody else?

Or when the children's publishing world tells us they've heard enough from Jews, especially when it comes to Israel. We are now officially over-represented and can go back to shutting up and not making waves.

When books about kids like my kids, living where we live, are still nowhere to be found from mainstream publishing companies.
When the Jews in many kids' stories are exactly like everybody else.
Exactly the way the world wants us to be.

Sure, we're represented.
Sit down.
Be quiet.
Don't make waves.

Should I have checked that box???