Once upon a time, with cereal…

A few thoughts mulled over a late-night bowl of cereal…

One time, maybe about ten years ago, my brother and I were squatting at my parents’ house for the evening – I think my parents were away camping and I was staying there with the little kids who would later become the big kids, mostly because my parents had cable.and a VCR, both things I did not have at the time.  I think we also walked to the shul-that-would-become-our-shul over Shabbos, which I only remember because YM left the water running in the bathroom sink and we returned from shul to find thousands of dollars of water damage – eek.

But anyway, Eli and I were sitting around and a commercial came on TV that showed a woman relaxing at the end of her long day with a bowl of Special K.  And it said, “not just for breakfast.”  And he and I looked at each other and pretty much simultaneously said, “people eat cereal for breakfast???”

For both of us, cereal was always more of a comfort food than a wake-up food, though on some days in my life, and undoubtedly his, it has served both functions quite nicely, at both ends of the day.

We LOVED cereal, growing up… and by “growing up,” I mean well into our twenties.  But more than loving cereal, we loved each other, and each other’s company.  There was nobody I would rather sit quietly with, perhaps at opposite ends of the kitchen table, than my brother, munching cereal, ignoring each other except when one or the other of us needed to speak.

Of course, there were also the opposite moods: when you want to build that little fortress out of cereal boxes and make the whole entire world go away.  Usually those moods would align: I’d build one, and so would he.  One fortress isn’t enough in the cereal-box arms race.  But heaven help you if you wanted to read something on the back of the other person’s cereal box.  Definitely grounds for murder.

The other day, I noticed – and I don’t know why this didn’t occur to me sooner – that nothing comes in cereal boxes anymore.  Well, except cereal, and that was kind of the least of it when I was a kid.  These days, they’re more likely to print a coupon code on the box than throw that randomly-selected colourful punch-out plastic thing into the mix.  And the coupon codes aren’t always for something really good, either – I noticed one you can redeem for FRUIT, presumably to go with the cereal. 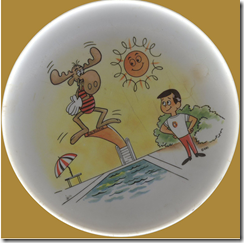 Perhaps they got sued by someone biting down on a plastic bitty-bit, or perhaps kids today (boy, do I sound like an Old Person when I say that) are so used to being catered-to, to having every experience in life personalized, that they could not possibly be happy with one of six action figures or spinners or rocket launchers or decoder rings.

In which case, I don’t even know WHAT it says about kids that there are so few of those “save-up-the-wrappers” (or box tops) type of premium “giveaway” today.  Take this attractive Rocky & Bullwinkle Cheerios plate, for example.  We had these (not my picture; ours are long gone), but just in case you were thinking we saved up for them back in some more gratification-delayed era, the happy news is that my FATHER did all the legwork for us.

He collected box tops – I imagine this happened during the brief time he was a single parent, when I was about 3 or 4 – gathered them up and mailed them in to the nice Cheerios people, perhaps along with postage, and in return received a couple of cheerful melamine kiddie plates.

And, because people never change, more than twenty years later, he was still at it, this time saving up the box tops to earn for his grandchildren three sets of these delightful pre-Chinese lead paint scare Thomas the Tank Engine Cheerios train sets (they still probably had the lead paint, we just didn’t know or worry about it in those days!). Oh, there’s still Box Tops for Education (in the States).  But what kid are you EVER going to convince that that is a wonderful concept?  “Sure, this cereal is awesome, but THIS cereal will help us be part of a community dedicated to education!” few comfort foods are quite as loaded with emotional baggage, with memories, with meanings deep, deep beyond the fairly unchanging, grain-sweetener-BHT-and-riboflavin ingredient lists on the side of the box.

And you’d better hope that if a particular cereal IS a comfort food, that it’s a popular one, and stays that way.

Some people campaign for orphan drugs – I’d love to campaign for orphan cereals, those flavours we will never taste again:  Team Flakes was my favourite of all time ever, and it came and went for a while before going belly-up, or whichever way a cereal brand goes when it dies.

I also remember my summer in LA, 18 years old and thousands of miles from home, freer than I would ever be again, and going absolutely nuts over something called Morning Funnies, a cartoon-themed cereal which featured “funny faces of wild fruit taste” and the endorsement of such comical luminaries as Dennis the Menace. 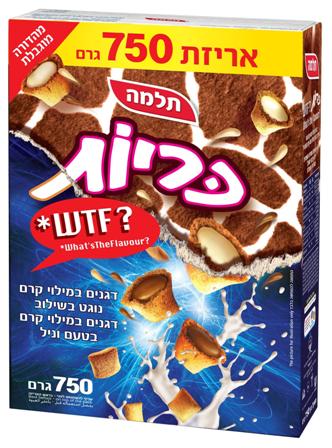 The biggest hardship of my two mornings in Israel – I know, free trip to Israel and I still find a way to whine! – was that the breakfast cereal was inordinately expensive.  When I was called back unexpectedly, I was just getting my head wrapped around the idea that, if we were staying longer, I would have to wean myself off the cereal and onto something – well, more Israeli for breakfast.  And somehow, the pillowy-sweet indigenous offerings had (and still have, when I see them here) almost zero appeal.

So – just as I will miss French when I leave Canada, I will probably also find myself missing cereal:  cereals of the past, cereals of the present and eventually, cereals of the future that will be a novelty to me, in the same way that I sometimes notice chains like Subway and McDonald’s have items on their menu that are foreign and new to me because they were introduced after I stopped eating in those places.

As with any comfort food, I suspect it’s not really the cereal I’ll be missing, anyway.

Previous thoughts on cereal, family, life, meaning and the Great Big Everything:

Is breakfast cereal one of your special things in life, or am I the only one???