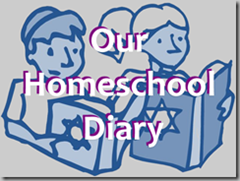 A quick update, for a short Friday!  Here’s a bit of what we did this week: 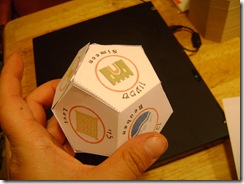 We used the “shevatim” (twelve tribes) dodecahedron die, though we didn’t play the game I made up to go along with it.

Despite my being out most of yesterday and a couple of other truncated days here and there, this was a week of finishing up and getting ready to start fresh!

We finished up a brief math break between JUMP Math levels 1 and 2 – we’ve finished most of the sheets in Miquon Orange during this time, and Naomi actually asked to move on.  She’s very excited about starting fresh with JUMP 2.1 next week.  Still not sure how much of the first pages we’ll do – there’s about 20 pages of review at the beginning of the book, and since we just finished the last one a few weeks ago, we don’t really need the review…

Here she is, telling time with Miquon.  Her time skills are WAY out of line with where she is with the rest of her math.  She gets confused by the numbers every which way, so she’s still pretty much guessing when she looks at an analog clock.  The owl helps, though! 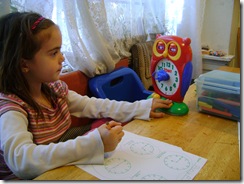 I have enjoyed our little Miquon break, and she is now well ahead of the curve, in terms of multiplication and fractions, which are introduced fairly late in JUMP.

More finishing up:  we finished Explode the Code, book 3!!!  Next week, we’ll start fresh by moving up in to Book 5, and then coming back to Book 4, as many parents have recommended on the well-trained mind forums.  Apparently, Book 4 introduces syllabication, which is a much harder concept than the compound words of Book 5.  We shall see.

We read more about insects in Apologia Science, and as part of the fun, we skipped our regular Draw-Write-Now session to use this library book on how to draw insects.  The lessons are very simple, right along the lines of our DWN experience.  Here’s my “demo ladybug” along with two insects Naomi Rivka drew: 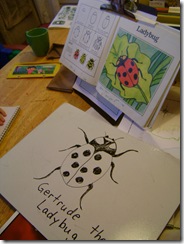 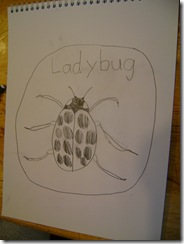 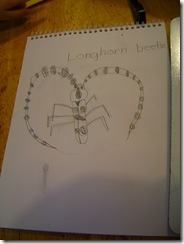 I think these turned out great! 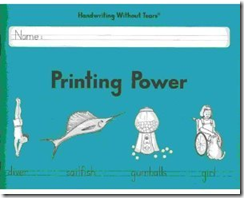 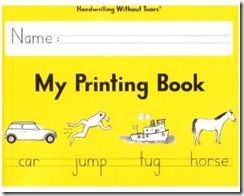 One last finishing up I’m especially happy about: Handwriting Without Tears!  We are officially DONE the third book, My Printing Book, and we will start fresh next week with the fourth, and final, manuscript (printing) based book, Printing Power.  This series keeps on wowing me with its emphasis on quality over quantity.  Handwriting lessons are our shortest of our “school day,” yet the lessons are definitely sticking and her handwriting is moving forward by leaps and bounds.  I plan to stick with this to the end of the series, if all goes according to plan.

In Story of the World history, we’re up to Chapter 13, the New Kingdom of Egypt, and about time, because I think our tolerance for Ancient Egypt is just about peaked.  I won’t say it’s TOO much about Egypt, but it’s enough, that’s for sure.  I bought this timeline sticker pack that’s meant to go with the History Odyssey program, and the stickers are wonderful.  There’s only one page of Ancient History stickers, so we’ll have to save the rest for future years, but for only $6.50, they’re even better than I expected.  Not too big – perfect to fit into our ever-expanding Book of Centuries.  The book isn’t expanding, but the information in it is!  (I think I’ll blog an update about that next week.)  Naomi continues to be fascinated by the BOC, and it’s amazing watching the timelines fill up. 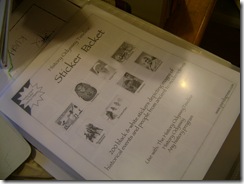 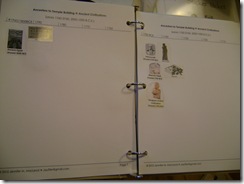 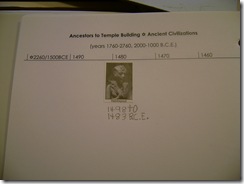 To my great surprise and relief, Naomi took to my 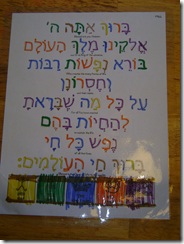 Meanwhile, Gavriel Zev kept slogging away through Get Ready for the Code – it goes one letter at a time, but generally,  he enjoys the lessons, which I keep to about 10 minutes (about 3 pages in the book).  I’ve found that if I incorporate physical movement, he enjoys it MUCH more.  We did a game last week where I would say a verb (I just said “action word”) and if it started with a “k” sound, they had to do it – otherwise, they had to stand still; like a phonics “Simon Says.”  So if I said “dance” they had to stand still, but if I said, “kick” or “kiss” or “carry” or “cuddle” (phonetically, these are “k” words, though Naomi keeps trying to correct us!) we had to act it out.  He loved it!

Here’s Luigi scaling a 100-block wall.  (this is a set I bought a while ago to go with the Cuisenaire rods… the colour (blue) doesn’t match, but otherwise, they line up perfectly because they’re marked in centimetres) 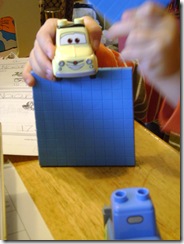 Well, there was more stuff, but it’s getting late, so I’ll just share these pictuers of a cake we made last night for Shabbos – an all-out, all-dairy, butter and buttermilk Red Velvet Cake.  I bought a bottle of LorAnn’s Red Velvet Emulsion, and it’s SO dark, almost black.  You only need 2 tbsp to colour an entire batch of chocolate cake a bright, bright red.  It has a gel-like consistency – very thick and blobby; kind of gross.  Besides dye, there’s some flavouring in there.  It’s weird – vanilla, but also slightly fruity.  The cake just TASTES redder than with our usual technique of adding an entire bottle of red food colouring. 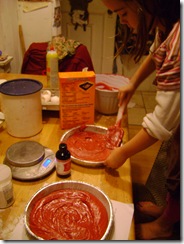 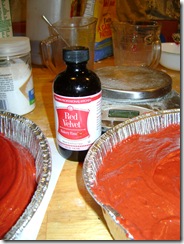 I read somewhere that you’re not supposed to taste raw batter or dough made with emulsions instead of extracts because the emulsion is so strong it has a bitter, slightly off taste when it’s raw.  Anyway, I didn’t warn Ted and he licked one of the beaters and said it was quite yummy.  So maybe it isn’t a problem.  One of the cakes (the one on the right) came out slightly underdone in the centre because I was putting the kids to bed and asked one of the big kids to test the cakes before taking them out of the oven.  Sigh. 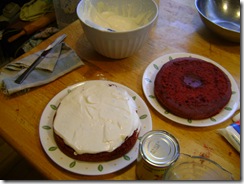 Today, I topped the finished cake with the recommended Cream Cheese Frosting.  Mmm! 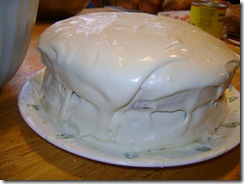 Why, oh, why, can I never make a cake that looks sleek and elegant…???

Anyway, that’s our week in homeschooling – slash – baking.  How was yours?