In defense of Pharisees 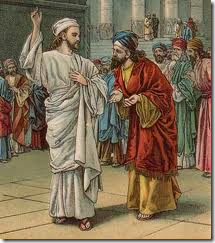 I know I have a lot of Christian readers; maybe you trust me by now, and will listen, and be interested.

Because this is the time of year, well, between Xmas and Easter, when y’all get religion for a while, as opposed to year-‘round like us (cue laughter here – I’m joking), and when you get reflective – by which I mean just a bit angry – about the role of Pharisees in the life and death of your messiah.

The Pharisees get a crazily bad rap, despite being the spiritual ancestors of modern Judaism.  Did you know that the Sadducees, who were the only mainstream alternative around the dawn of Christianity, actually believed…

They also believed something akin to the sola scriptura doctrine of Protestant Christianity – nothing comes between you and the Torah.  No commentary, no midrash, no mishnah, no oral tradition can override your own personal interpretation of the scriptural message.  To look at things overly simplistically, for my Jewish readers, Protestantism developed this doctrine in part due to Catholic abuses of tradition and interpretation, a situation that could probably be a useful analogy for many of today’s more reactionary Jews.

This doctrine is very lovely except that, visit any Christian bookstore, even the most doctrinally Protestant one, and what you’ll find is dozens, nay hundreds, if not thousands, of books… interpreting Scripture.

While Martin Luther may have been eminently qualified to read the thing for himself, most of your average Christians not only don’t understand Greek, they don’t understand King James or any other translation except perhaps, The Message Bible, which Ted looked at a couple of weeks ago (I got it out of the library, I swear!) and hastily put down in disgust at its inaccuracies (much the way I did with Bishop John Shelby Spong’s latest flock-shlock, Reclaiming the Bible for a World Where Clearly Anyone Believing in a DIVINE Bible is Completely Barmy, but that’s another story I won’t share here).

The point is – nobody understands the Bible.  If you’ve read it cover to cover and were riveted with its meaning and relevance to your life, I’m sorry if I’ve offended you.  You are the only one, I assure you.  So here’s what the Pharisees said:  “You need spiritual guides.  We are not perfect, we are only human, just like you, but perhaps more learned.  Let us help you.”

They were indeed not perfect, but at the time, a difficult and conflicted time in the history of Israel, a time that would ultimately lead to the loss of the Temple (Bais HaMikdash) and the two-thousand-year dispersion of the Jewish people so they might be justified in feeling a little turmoil-y, they were easily the more copacetic movement for anyone who considers themselves a modern Christian.  Not just the lesser of two evils, which is how many sermons (presumably setting things arights, historically) portray them, but good people, like Noach (Noah) , “righteous in their generation.”

Which is a good thing, or at least a happy and interesting thing, because theirs was the movement that survived.  By arming themselves with leaders, with commentaries, with good books (indeed, THE Good Book, translated into the vernacular for a generation in diaspora), they became the forefathers of the rabbinic tradition which has given us modern Judaism.  By stripping themselves of tradition, leaders, commentary, the “fluff” they so disdained, and the promise of the World to Come, the Sadducees earned for themselves only a fairly swift extinction.

One of my favourite Jewish stories, ever, and it is a short but pithy one, comes from Maseches Yoma, the section of the Talmud dealing with laws of Yom Kippur.  Yup, laws – those awful things the Pharisees were so famous for.  Because, it’s true, like them, we modern Jews believe there’s a right way and a wrong way to do things.  We believe Hashem (God) thinks so, too, because He’s told us so many times, in so many ways – despite ALSO telling us, through prophets, that he would like us to also pay attention and think proper thoughts WHILE following His laws.

So this story says that before Yom Kippur, senior kohanim (priests, usually Pharisees) would implore the kohein gadol (high priest, usually a Sadducee) not to alter the traditional service of the day.  It says “the kohein gadol would cry because they had been suspicious of him… and the kohanim would cry for having suspected him.”

The legalism behind this, from a wiser source than I:  “the Tzadokim [Sadducees] argued that the incense should be placed on the coals before the Kohen walked in with them to the Holy of Holies; proper halacha, on the other hand, mandated that the coals and incense be combined only after they were brought in. Chazal [our sages] had good reason to seek assurance from the Kohen Gadol that he would follow halachic instruction, rather than Tzadoki practice.”

Who cares which way the incense goes in??!?  Isn’t this just the ultimate example of Pharisaic legalism?  But look at the fact that BOTH have tears in their eyes.  If anything, the Sadducees were harsher and more legalistic than the Pharisees, but we don’t have to get into that here.  Does that mean they’re both wrong, as in some of those trite “setting-things-right” sermons?  I hope not.  Like I said, God told us the details matter. 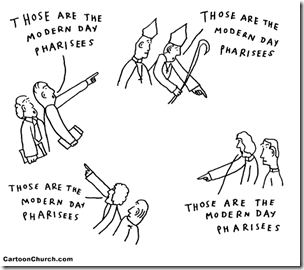 Ultimately, we believe God cares.  Caring about rules may seem mundane and silly and surreal, but we’re not making you follow them, so… so what?  (unless you’re Jewish, in which case, come on in – the KoolAid’s fine!)

So use the word “hypocrite” if you mean it (but make sure you really mean it first – a hypocrite says he or she believes one thing but then goes and does another thing altogether… someone who does something, repents, fixes his or her actions, then goes on to tell others to do the right thing is NOT a hypocrite, but what we call a “baal teshuvah.”)

But any time you feel tempted to use the term “modern-day Pharisee” or “Pharisaic” or just throw the word “pharisaical” around to mean any old hypocrite or legalist… well, don’t.

Because the pharisees are us… but they are also YOU.