If you bought the Chanukah Lapbook… HELP! 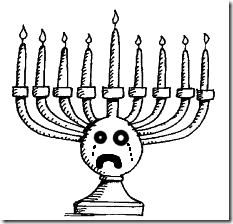 Have you noticed ANY typos in this thing?

Somebody on CurrClick gave it two stars (out of 5!) because “I was very excited about this product but it is poorly written, has many spelling mistakes, is very confusing (at least 4 sections on the Menorah, but they are not together).”

I think it’s a fantastic idea to put everything Menorah-related together, and I apologize if it is confusing – I plan the components and create them, but generally leave them in the order in which they were first created.  Maybe it’s laziness, maybe it’s because I work in Microsoft Word on an old computer, and the thing has a heart attack working with large files and lots of graphics, and sometimes when I move stuff around it is lost and gone forever.  Anyway, it’s a valid point (though I wouldn’t give a product TWO stars out of five for that).

BUT… where are the spelling mistakes she’s talking about???  I’m doing a spell-check of the teaching and overview and noting where word gives me a wiggly underline.

I have absolutely no problem with constructive criticism – love it, in fact; as a writer, love knowing people are out there reading, even if they have a problem with something they’ve read.  But SPELLING MISTAKES???  I pride myself on near-perfect spelling, which is a really dumb, geeky thing to be proud of, so I take this VERY personally.

Anyone care to enlighten me?