Spelling Lessons with Explode the Code 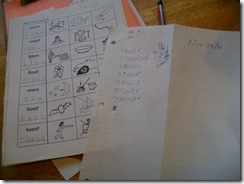 A couple of people have been asking on the boards, as I was at this time last year, how to transition from phonics to spelling.
The assumption out there in education-land seems to be that phonics is baby stuff and spelling is how big kids learn.  Maybe they’re thinking of BOB Books and their ilk.  Since our disappointing experience with Spelling Workout earlier this year, and our return to Explode the Code, I have realize that this popular perception is not necessarily the case.  Why would they make Explode the Code books all the way up to level 8 and beyond – at least to a Grade Four level – if phonics becomes irrelevant (or less important) the minute a child is reading somewhat successfully?
In fact, it’s only now that Naomi’s reading fairly well that the phonics rules are starting to make sense, and Explode the Code guides her gently through understanding and navigating the maze that is spelling in English.
The only thing I really liked about Spelling Workout was the idea of a spelling LIST, and spelling TESTS that would check to make sure that she was absorbing the material.  And then I realized, a couple of months ago, that there’s no reason I can’t use Explode the Code lesson words as a spelling list in just the same way.   So I’ve developed a technique that works extremely well for us, offering (kinda) rigourous spelling review along with a thorough, rules-based phonics curriculum.
Here’s what I do: 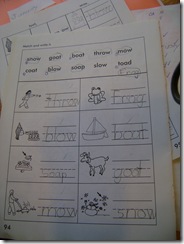 (In today’s lesson, she decided the “toad” looked too much like a frog – so she’s written in her own choice at the top of the page, then circled it and written it neatly on the line below.  Hurrah for independent thinkers!)
As with everything else, this is what works for us… I’d love to hear what you’re doing to adapt the programs you love as your kids get older and more capable!