To satisfy his insatiable demand for “same/different”, Naomi created this worksheet which is so far above his head, it’s just completely funny. 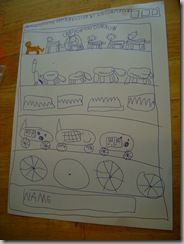 On each line, he is supposed to:  figure out which of several items is DIFFERENT and circle it, then, identify one of the “same” items that is missing a part, draw in the missing part and then completely colour that one in.  She’s done the first row for him (“for you dun now”) – she has circled the DOG, which is different, drawn in one cat’s missing tail and then coloured him in with orange marker.

In the second row, three elephants are missing tails, and the giraffe-thing is DIFFERENT.  In the third row, one car is different, the other is missing a tail.

Sheesh… I think you need a PhD to fill in this worksheet!  Happily, she has provided not one but THREE checkboxes at the top so you can make sure you understand all the instructions.  She was sad when GZ didn’t want to try it, but then happily filled out the whole thing for him later on.