Postscript:  If you want, you can see how it all turned out! 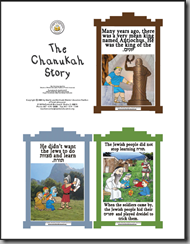 Yup, it’s been a while, but I’m hoping to make another lapbook!  Despite the fact that it’s Chanukah, which is one of my least-beloved holidays because, well, the connotations.  “Holiday season” and all that.  Humbug!

Outside links (let me know if you know of others!):

Other ideas I haven’t quite figured out yet:

For the cover, I figure I’ll have Naomi do a handprint menorah picture like this one.  And write a title neatly as well.

We won’t have too much time… we’re finishing up our Frogs science unit this week, and then I figure we’ll do Chanukah for 2 weeks, then work our way up to Human Body, introducing it with an All About Me unit just for fun.

I’m skipping some of the animal units in our Living Learning Science curriculum because if we do them all, we won’t have time to do human body before Pesach.  Believe it or not… it’s not exactly close, but since we’ll have to stop for Purim also, there isn’t THAT much time left in the year!!

(after Pesach, we’ll hopefully pick up the Living Learning Science with PLANTS – and what a great time of year for it!!!)