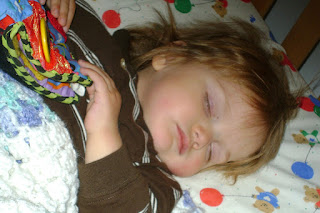 I know it's dumb - it would probably be terribly awkward to sing to them, and they would be squirming with embarrassment. There's just no way to go back, to get that back.

Anyway, I love how I can stand between the toddler bed and the crib and hold one hand of each child. Gavriel Zev pulls "his" hand as far as he can get it through the bars (my shoulder prevents him from pulling my whole body in), then takes my hand and rubs his face, especially his lips, teeth and gums. He'll spread my hand over his whole face and totally shmear it up - yuck - while I'm singing. I always have to wash my hands after saying goodnight to him. :-)

In case you're wondering, and so you can savour this together-time with your own little kids if they'll still put up with your singing, here's my own English version of HaMalach, because I haven't heard on a tape or anywhere else an acceptable version. I usually sing it once in Hebrew, then this version in English:

(Both version use what I call the "traditional" HaMalach tune, but then, I hate when people just call it the traditional tune, because who knows what someone else's tradition is...? I do also occasionally sing HaMalach to Brahm's Lullaby, but I don't sing the English one to that tune for whatever reason)

Okay, it looks dumb in print. But it works with the tune, and incorporates a few of the basic ideas. Sometimes, that's enough.