The Jewish kids’ book YOUR family has been waiting for (I hope?) 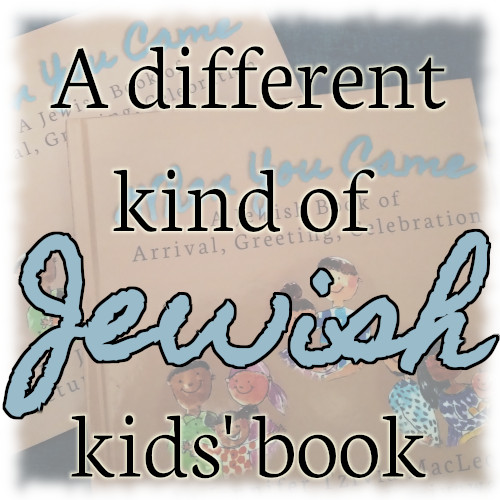 Last year, I wrote a book, just before I found out our older daughter was pregnant. It's a book all about the way families grow - through birth, through adoption, through fostering, and how all the ways are magical and lovely.

But the process wasn’t as straightforward as with other books I’ve created, in part because I felt so, so strongly about this one. This is a book I have wanted to create for a while, after knowing people who had either adopted or fostered children and seeing that there weren't really many Jewish books to support these also-miraculous ways of growing families.

As I have seen from other aspiring writers, however, the more strongly you feel about a project, the more likely it is to come out very, very badly. Because you are so passionate, you write garbage – overly sentimental tripe - and send the book out into the world LONG before it’s ready.

I didn’t want that to happen. Yet I had big dreams for this book. I pictured a book that would share the wonder of a child's arrival without making any assumptions about HOW that child had arrived. And I realized, as I sat down to write, how very many things every single child's arrival has in common: a period of waiting, davening, anticipating; a period of getting to know one another; a welcoming of some kind into the Jewish community that will help the child grow up.

I also realized that I wanted the book to be diverse in other ways. Let's be honest: there are lots of books out there showing all-white Ashkenazi families, and not a lot showing a range of skin shades and abilities, along with older kids and other relatives.

In order to make sure the book didn’t turn out terrible, like so many I’ve seen, I knew there weren’t going to be any shortcuts.

First, I had to make sure the text was just right: specific enough that it would be helpful to Jewish families; general enough that families could enjoy it no matter what their situation happened to be. To do that, I ran it past my critique group again and again until they were basically sick of it. Ha, I kid, but seriously, my critique group partners are heroes, who do everything possible to weed out errors, remaining enthusiastic and supportive about the messages the text conveyed through multiple drafts, some better than others.

(Some critiquers in the group thought I'd written the book in honour of our first grandchild's imminent arrival, but as mentioned - that news came along as a bonus, after the story was already written.)

Step 2: Create the illustrations & look of the book

Then, once the text had reached a level that I could be proud of it, I had to find a talented illustrator with a style that was free-form enough to feel organic and not too cheesy. Hiruni Karayawasam, a design student in Sri Lanka, had the talent and dedication, along with an openness to learning enough about Judaism to create accurate representations of shuls and Jewish homes. She was a pleasure to work with.

Additionally, coming from a traditional (okay, I'll use the word Orthodox) perspective, I wanted the families in my stories to represent the kind of families in my communities - men who wear kippot; women who cover their hair in some way.

However. One of my goals was to make sure the book would suit families who were coming from a range of Jewish backgrounds. There's not really anything prescriptive in there except some basics: welcome your kid, bless your kid, give them a name, involve them in your community. As I worked on this book, I also happened to have been editing a book of Jewish parenting wisdom by a writer I really admire from a non-Orthodox background, and I admit that some of her views may have rubbed off -- for the better.

Finally, at the last minute, I also decided to weave in actual sources in the Torah, Tanach, and other traditional writings, to support the massive life transitions shared in the text and pictures. These pesukim (verses) appear as a colourful, organic part of the book, but they're absolutely not required to understand the flow of the story. Readers can choose to focus on them, or ignore them, as the mood strikes.

(All verses included have plain text with vowels as well as full translation on the same page. In this case, I have also removed the vowel from the final ת / letter tav of the verse so it works for boys or girls…)

To give you an even deeper peek behind the curtains, as I worked with Hiruni on the illustrations, I decided to create three families, who’d be depicted in 5 spreads each:

1) FAMILY 1: A European Ashkenazi-looking family pregnant with their first baby (yes, I started with this family, because this was my own experience…)

(this sketch was later changed because the mom is bringing the baby, so Dad is there alone with older kids…)

3) FAMILY 3: A mixed-race family adopting or fostering an older child with a disability

(in this book, the older child has Down Syndrome, or Trisomy 21, and I worked with the illustrator, with lots of reference photos to make sure that the child was representative of real children)

As a self-publishing writer, marketing is the toughest piece of the puzzle for me. That’s where you come in, and this post.
And as I said in my last post, sometimes the toughest part of those of us who aren't marketing-minded is the ASK. So in the next line, I'm going to break the fourth wall or whatever and come right out and ASK you to buy the book.

There - not such a tough sell after all, I think.

I’ve written a LOT of kids’ books. But this experience, more than almost any other, has been quite a lot like bringing a beloved child into the world. And as with any child, after all this labour, I’d love to see it succeed.

To do that, I believe this book should reach as many families and communities as possible. If you can think of any ways to help me do that, I'd really appreciate it. I've made the book available as both a high-quality hardback, an affordable paperback, as well as a super-affordable Kindle version, so if you can think of anybody who might need something like this for their family, library, or school, please feel free to send them the link and suggest it.

I'm excited to be part of creating something new where I think there's a genuine need. And I'd love to hear from you about your Jewish family and what makes it unique so I can get started thinking about future projects and other needs for Jewish books that might be out there.

I know my site isn't allowing comments at the moment. I wish I knew why. In the meantime, feel free to get in touch. Just hit "Me & My Books" in the menu above and you'll find my official site with WhatsApp, email, and so many other great ways to contact me. OK, not many. But still - I'd love to hear from you!!!