What do we tell our kids about Chabad and “Yechi”? 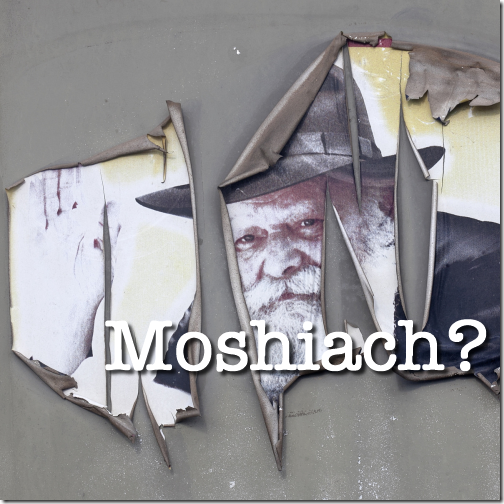 If I start by saying I really like Chabad, and adore the late Lubavitcher Rebbe, z"l, well... maybe you already know where I'm headed.

Naomi Rivka has been asking lately what I think about Chabad.  She asks, in part, because she already knows how I feel.  She already knows I’m bothered, though to her, it’s mostly about “liking” and “not liking.”  I wish things were that simple.

Our little neighbourhood in Israel has a significant Chabad presence, and Chabad conducts fairly significant outreach within the community.  Which sounds nice until you realize that this is a religious neighbourhood, closed on Shabbos, where some huge percentage of people are shomer mitzvos.  Sure, it’s mostly religious Zionist, and there are a range of observances, for sure, but we’re pretty much all religious here in some way or another.

So at that point, this isn’t outreach but inreach.  Convincing people who are religious to be… what?

A lot of Chabad’s efforts here are focused on kids, including a big Aseres Hadibros gathering today for Shavuos.  The events are usually well organized and include prizes and popsicles, so they get a lot of kids.  And they almost always say “yechi”.

The phrase “adoneinu, moreinu, rabeinu” – “Admor,” for short – has long been used by chassidic groups to describe their leader.  This part isn’t controversial.

But the part about “long live” definitely is, considering that the person in question died in 1994.  Oh, and denied that he was moshiach.

Chabad chassidim, sometimes known as Lubavitchers, started singing this passuk a couple of years before the Rebbe died.

He had already had a stroke, and so there is disagreement – from what I can tell and heard from Chabadniks at the time, based on his gestures – as to whether or not he wanted them to sing it, essentially crowning him as moshiach.  He couldn’t speak between the stroke and his death.  It does seem like he was gesturing yes with greater and greater positivity.  But I’m not a neurologist, and don’t know how much understanding he still had by that point.

After he died, Chabad was split.  For some, the messianic hopes were dashed; others hauled out proofs that moshiach can still be a person risen from the dead.  Many in the mainstream Jewish community were appalled because this view seemed shockingly close to Christianity.

Actually, that’s not just my opinion, but also that of Rav Aaron Soloveichik, who told The Forward in 1994 that “"there is no possibility whatsoever" that Menachem Mendel Schneerson would emerge from the dead to be the Messiah. In his words:

"That could be possible in the Christian faith, but not Judaism."

His suggestion, way back then, was that Lubavitch should appoint a new Rebbe, saying, “If they don’t, it will be very damaging.”

In my opinion, it has been extremely damaging.

In my opinion, this messianic fervour undermines my admiration for the movement that the Rebbe built.  In my opinion, which is worthless because this is a movement I’m not part of, and a Rebbe I never met, he would not be pleased with the extent of the chillul Hashem (desecration) going on here in his name.

According to Wikipedia, Chabad has never officially embraced a messianic position.  This was also asserted by Rav Soloveichik in his letter.  At the time, in 1994, it was his “understanding that the overwhelming majority of the Lubavitcher Chasidim do not ascribe to the notion that the Rebbe will be resurrected as the Messiah.”

While that may have been the case in 1994, I doubt it is true today.  And while the movement itself has never officially gone meshichist (messianic), that doesn’t mean individual shlichim (emissaries) haven’t.  Or individual Chabad houses – including the one in town here.

Which means that every single Shabbos, Chabad goes through every single playground in the neighbourhood – there are quite a few – gathering children together and leading them through the Twelve Pesukim, articles of faith which the Rebbe greatly encouraged during his lifetime.  And then, after the 12, they add another:  “Yechi.”

For any kids who stick around through all 13 pesukim, there are popsicles or other yummy treats.  The most enthusiastic kids get their treats first.

These are mostly religious kids, learning things they learn every day at school… except for Yechi.  Most kids are happy to go along with it if it means a popsicle.  But this is Israel, where they know and understand exactly what they’re saying:  “Long live the Rebbe, who is moshiach.”

I’m less and less okay with it as I become more aware of what Chabad is doing here.  We have friends who leave the park in protest when they come in to do this on Shabbos; I admire the gesture, though I’m not sure this is enough to get the point across.  (Who notices one family leaving a park?)

Yechi and meshichism may not be official Chabad doctrine, but neither is the movement doing anything to shut these practices down, or at least to keep the more radical messianic doctrines politely under cover, like they once did.

After the Aseres Hadibros today, which my kids didn’t go to, the local Chabad is having another gathering for kids tomorrow.  Here’s the poster – looks like fun, right? 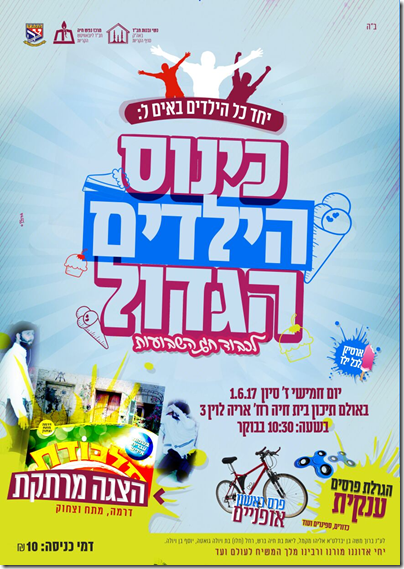 And then there’s this bit in the lower-right corner:

“Yechi adoneinu”… and so on.

Harmless fun?  Righteous do-gooders?  I’m no longer entirely convinced, if I ever was.  But aside from the old quotes from Rav Soloveichik, I haven’t seen a lot of condemnation from within the mainstream Jewish world, which is a real shame.  Chabad is so big, and so powerful, both here and in the United States (and I’m talking about real political power, in both places), that I think Jews have become afraid of stepping on their toes.

For my kids, as I said before, this comes down to the simple-seeming question of whether or not I “like” Chabad.

It would be easy to suggest that I don’t, but as I said right at the beginning, I totally do.  I have worked for two Chabad organizations and seen the hard work and personal dedication that goes into the kind of hard-core outreach that few Jews have attempted since the time of Avraham Avinu.

Chabad absolutely does a tremendous amount of good in the world, often with a lot of personal effort (mesiras nefesh).  Much of this is due to the personal influence – to this day! – of the character of the Lubavitcher Rebbe, who was an extraordinary person and one of the greatest Torah leaders of our generation…

…And who was not moshiach.  I can’t say he was.  And I don’t want my kids – or anyone’s kids, really – to be placed in a position where they have to say this in order to win a prize, a popsicle, a spinner, anything.

But doesn’t all the good they do in the Jewish world make up for this one “quirky” belief?

That depends on whether it’s just a quirk, or whether it goes deeper, to the core of what we stand for.  As Jews, we are supposed to die rather than give up our religious beliefs.  We’re certainly not supposed to offer them up for the opportunity to win a bike or another cool toy.

We’ve seen this before with Christian missionaries.  No matter how nicely a person leins, how learned they are in Torah, how black their kippah, how long their beard, the minute they’re telling Jewish kids to embrace non-Jewish beliefs, they shouldn’t be welcome in a Jewish neighbourhood.