What's in your quiver? The very mixed blessing of grown-up kids 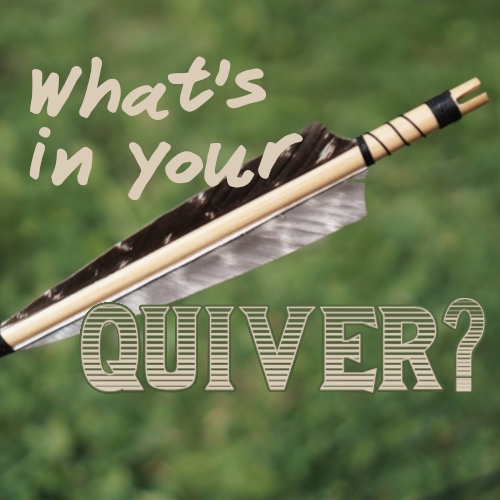 What are you blessing your children with today?
It’s erev Rosh Chodesh Sivan, which is considered an "eis ratzon," a time of grace, for the prayer of the Shelah Hakadosh, a prayer for righteous children, which is quite lovely and humbling and all.

But as a parent of adult children, especially one who has chosen a very different path when it comes to Judaism, it's also perplexing.
What do we do when our children don't turn out the way we had hoped and dreamed and prayed, day after day, year after year, at countless and innumerable times of grace?

Back when I was homeschooling, I came across a number of parents who identified themselves as "Quiverfull."
I had no clue what this was so I had to look it up. It seems it's a Christian parenting philosophy whereby you have as many children as possible. The term actually comes from Tehillim 127:5, so they borrowed it from us, and I'd like to reclaim it for a minute:

What is THEM? Well, "banim," meaning sons, but let's just say children.

And what does it mean, having your quiver "full" of children?
On the surface, as these Christian parents assume, it does seem to mean lots and lots and lots of children.
And why not? Children are so joyous and wonderful - right?

Not always. Sometimes, when you have big children, it comes with a lot of pain, as they make life choices that... well, they hurt.

While Judaism usually speaks of children as an unqualified bracha, for obvious reasons, Rabbi Shimshon Rephael Hirsch points out something interesting - albeit obvious - about this perek of Tehillim:
"Nothing is so apt to add to a man's cares, indeed, make them infinitely great, as the coming of children."

Did you see what he did there? Not just great, but INFINITELY great.
Having children rips a hole in your heart that will never, ever mend.
R' Hirsch says the more children and grandchildren you have, the more people depend on you and the more you should worry and fear.

Yet, he continues, if you are close to Hashem, then you realize you're just a caretaker of something precious that Hashem is entrusting to you. That's why it's a bracha: because Hashem is trusting you with this very, very hard work that never ends and always hurts.

So what about these arrows?
R' Hirsch goes on:
"The arrow shot from a strong hand bears within itself the strength of the sharpshooter long after it has left his hand," both "unswervingly and unhesitatingly" in the direction it was shot.

And here's where I wish I could argue with R' Hirsch.

I want to ask him: How can you say that? Do our children, our arrows, always keep flying in the direction we point them? No way! Sometimes I think they're more like bees doing a random buzzing flying dance than arrows shooting anywhere like where I wanted them to go.

But, of course, R' Hirsch knew this . He lived in Germany at the height of the haskalah (enlightenment) and wrote extensively on the role of Jews in the modern era. He certainly knew many good families whose kids chose a path other than a traditional halachic Jewish one.

So why, in this perek of Tehillim, is Shlomo Hamelech, its author, promising us kids who will shoot straight and narrow - a guy whose own children didn't exactly take a proud place in Jewish history (most sources aren't sure how many he had and none I know of ruled the way he had or attained any kind of greatness)? Why is R' Hirsch?

Suggesting it's all in parents' hands seems naive, if not downright irresponsible. If we could point our children in the right direction and be sure they'd get there - well, halevai, as we say here in Israel. If only.

Of course, this doesn't even begin to touch on our children's free will, which they have, and must have, including the freedom to choose NOT to be our arrows but to go somewhere else entirely.

But looking back to R' Hirsch's explanation of the earlier passuk, where he says that the work of parenting, and the pain, is not just great, but infinitely great, I think he knows and understands all this very well.

We have to believe in our ability to plot a life for our children and then send them off into an unknown future. If we didn't, the entire work of parenting - something I've been doing for 26 years now - would be entirely meaningless. We need to believe in the meaning of what we're doing or we would collapse in despair. We wouldn't be able to get out of bed in the morning.

So we tell ourselves this uneasy untruth, and Shlomo Hamelech tells us, and R' Hirsch tells us, and Jewish educators tell us, often suggesting that their school / yeshiva / seminary is the thing that will help us keep those arrows on their proper trajectory.

In the prayer of the Shelah Hakodesh often said on Rosh Chodesh Sivan, this time of graciousness, it says, among many other things,
בַּעֲבוֹר הָאָבוֹת הַקְּדוֹשִׁים אַבְרָהָם יִצְחָק וְיַעֲקֹב, וּבִגְלָלָם תּוֹשִׁיעַ בָּנִים לִהְיוֹת הָעֲנָפִים דּוֹמִים לְשָׁרְשָׁם
For the sake of the fathers save the children, so the branches will be like the roots.

Parents say these words each year and wish these things to be true with all their heart.
We have to believe those arrows will get where we want them to go.

But they don't. We all know people with those worst-case scenarios, those nightmare stories: people whose children are dead or cut off or addicted or lost to mental illness. Or living a non-Jewish life that is almost impossible to understand after a lifetime devoted to serving Hashem.

Which is why R' Hirsch also comes to tell us - the bracha in having children is not that it won't hurt. It is that it WILL hurt, over and over again, forever.

On some level, I can't even believe I'm writing this. I'm not a complainy person, really I'm not. I don't nudge or kvetch or try to guilt my kids (much!). I don't tell them how much pain they've inflicted on me because for the most part, they are good kids and there is so much nachas.

But the bracha isn't in the nachas. At least not entirely.
Part of the bracha lies in suffering and knowing it's in the service of Hashem. And trusting that things will turn out okay, wherever that arrow ends up.

Honestly, I think I understand now that those Christian homeschoolers got the idea of Quiverfull all wrong. It's not about quantity, about sending out six or ten or fifteen arrows in the hope that one will hit the target. This isn't a roulette table, and we're not playing the odds. It's about taking however-many arrows Hashem gave you and sending them out unafraid, knowing this is what Hashem is asking you go do.

It's about taking aim, as straight as you can, and then letting go.

If you can do that, and it really seems to me that it is the essential task of parenting, then your quiver truly is indeed full. Not of children, because it was never about the number to begin with. But of emunah.

p.s. Here is my own unasked-for and ever-evolving advice based on NOTHING except living this life:

1) Be as loving as possible and cherish the tzelem elokim in them AND their partner.
2) Don't forget they're Jewish, and remind them of it from time to time. :-)
3) Communicate your own love of Judaism and how it helps make your life richer and more meaningful.
4) Hang on for dear life.

I'd love to hear your advice, too! Leave a comment below.