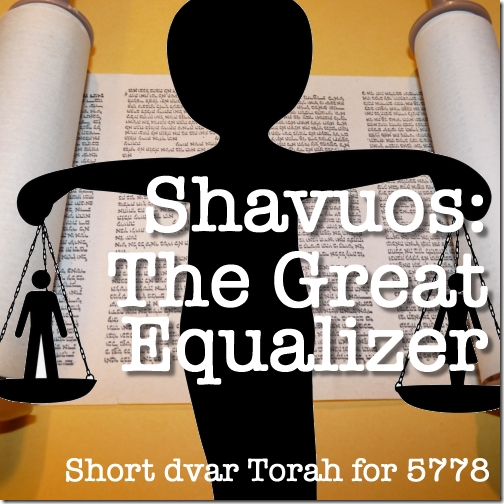 Oops – posting this a little late!

When a person comes to study Judaism, although I certainly hope they’re welcomed and greeted warmly in shuls and classes, the stark truth is – we don’t need you. The message isn’t quite “go away,” but just, “we don’t need you.”

I grew up knowing Jews don’t proselytize: we don’t seek converts. In general, we believe that as long as a non-Jew follows the seven laws of Noach’s descendents, they’re doing okay. “We don’t need you.”

But the truth is, the world wasn’t in great shape after Noach’s time. Hashem promised he wouldn’t send another flood, but we know the majority of people were ovdei avodah zara. The world was desperate for a message of truth, a messenger of Hashem.

And then, along came Avraham and Sara, the spiritual parents of every geir, every convert, ever. They were originally Avram and Sarai, but they shed their old names as they stepped into the greater role that Hashem had prepared for them: bringing Hashem’s truth into the world.

We know that when Avraham had the courage to leave his family and become the first geir, Hashem didn’t just promise to give him a bracha. He said “Veh’yeh bracha” – and you shall be a bracha.

What does it mean to be a bracha? It means “we need you.”

The entire Jewish world needs geirim and giyoros tzedek. They don’t just bestow bracha, they are a bracha for their energy, their depth of learning, and also perhaps just to make those of us who were born Jewish more aware and more proud of our own heritage. We should never take it, or them, for granted.

Whenever a geir or a giyores steps into the waters of the mikveh, they are saying, just as Rus and Naomi promised each other, that their fate, their future, is forever bound up with ours.

Rebbetzin Esther Jungreis challenges us with this responsibility. “Will we parrot the infamous words of Kayin, "Hashomer Ochi anochi?  - Am I my brother's keeper?" or will we respond like Avraham Avinu who said, "HINENI - HERE I AM" and kindled the light of G-d in the hearts of all those with whom he came in contact.”

Each and every geir has already answered the call, choosing the footsteps of Avraham Avinu: “Hineni.” Very small, very aware of their own vulnerabilities, often leaving family and friends behind and making personal sacrifices that go well beyond the spiritual.

I was born Jewish, but have sat before bais din and been turned away more times, probably, than many geirim. I suppose that’s partly what fascinates me about this journey, one so many Jews are barely aware of.

There’s a story, from a long time ago, that helps me think about that difficult journey from no to yes.

The influential Tzadukim, who denied the authority of Torah she b’al peh, claimed that the incense should first be lit outside the Kodesh haKodashim and then carried inside already burning. The elders made the Kohen Gadol swear not to perform the service this way.

But then – both the Kohen Gadol and the elders would turn aside from each other and weep.

The lesson in this: sometimes, those who guard the Torah must make really hard decisions; decisions which bring both sides to tears. But they have no choice; they are guarding a priceless treasure.

Imagine, then, their simcha, the overwhelming joy when these Torah guardians, these gatekeepers, meet a geir who is sincere, who is ready, and they finally have an opportunity to say yes. To share the treasure.

To say this: We need you.

It is the very least those of us who are already here can do to meet each geir halfway – to say “hinenu.” Here we are – we are your community now. We need you.

Shavuos is the great equalizer. Today, we all stand together at Har Sinai, just as our neshamas did so many, many years ago. Today we all stand humbly before Hashem, cleansed and small and insignificant and alone—but together we make up a great nation. May we go from strength to strength… together.