Hanukkah and the Holocaust: What stories are we telling our Jewish kids? 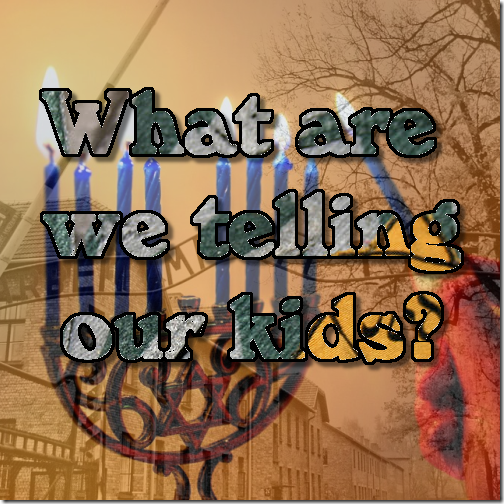 If, as Jewish parents, we care so much about sharing Judaism with our kids, why aren’t we doing it through the books we read them???

Only slightly frustrated by a flood of Chanukah books coming at me from all sides, I decided to go to my friendly local online library (in Toronto) and search for various keywords of Jewish life, just to rank which categories were most important to us, as parents and readers, based on how many kids’ books turned up in each category.

So it turns out we’re telling our kids a whole lot – about Hanukkah and the Holocaust. And not much else.

I want to point out up front that this search was never going to turn up as many books as an Amazon search would. Amazon turns up anything and everything, you know that already.  Big and small; garbage and classics. But my thought was that a library search is somewhat curated – someone’s actually making decisions about what turns up here.  So this search is more likely to turn up the books that librarians actually order for our libraries to share with kids of all kinds.

One more catch: This is the online library, not the physical library, so these are all ebooks. Picture books and others that aren’t available as ebooks will not turn up in this search. But still – it’s 2018. There should (spoiler alert!) be more variety than this. 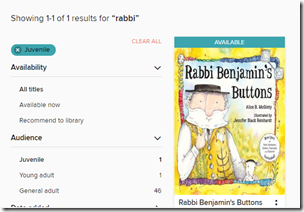 (ah, yes… all the faces of Holocaust-displaced or killed Jews…)

After I had satisfied my curiosity and made the table above, I also checked up on some of the top Jewish children’s authors today… as determined by a very unscientific survey of which writers pop up on my own Amazon author page.  Here are some stats for the leading lights of Jewish kidlit:

Of course, this is just one public library system, and not a very scientific sampling.  Although it happens to be the public library in Canada’s biggest Jewish community, with 188,000 Jews, putting it slightly ahead of Beer Sheva, according to Wikipedia.

But what really surprised me – I honestly wasn’t expecting to see this at all –is that most Jewish authors seemed to be one-hit-wonders. I wonder why that is. Why don’t we trust the same people to keep telling our kids Jewish stories?

Or is it that publishers are so focused on telling our kids the same stories over and over again – the Holocaust, Hanukkah, the Holocaust, Hanukkah – that we as writers get frustrated trying to get a word in edgewise? That we give up writing Jewish books and head off to greener pastures elsewhere, where we’re free to write whatever we want?

It’s just a thought. I don’t know what the answer is.  Maybe some have written prolifically for years, but haven’t had their back catalogue released as ebooks.  That’s entirely possible.

(It’s also possible that most children’s authors are one-hit wonders, period. I’m open to that possibility as well. Honestly, let me know what you think in the Comments.)

Also: If you know of any other great Jewish authors for kids… or any keywords to search for Jewish books that I’ve left out (especially any categories that might have as many books as Hanukkah and the Holocaust)… please let me know and I’ll happily search and update this post!

Oh, yeah – and let me know what your favourites are as well! What’s truly great out there in Jewish kids’ books????

In the meantime – Happy Chanukah… and Happy the rest of your awesome Jewish life, even if there are no decent kids’ books about it!