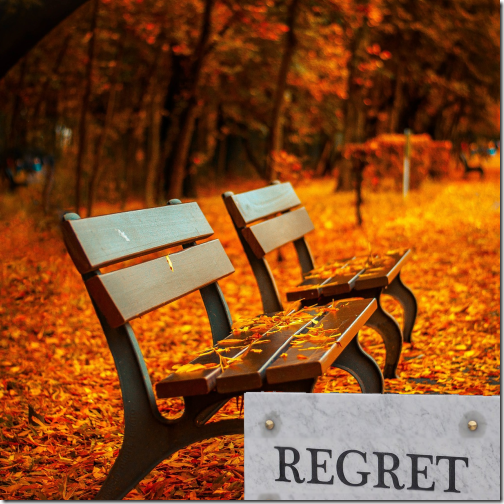 Maybe regret isn't the right word.  But I’ll use it here anyway.
Because here in this dark, dark, cold time of year, I'm finding myself deluged with it -- three moments of regret, large and small.

Driving in a hurry to pick up a crying baby from daycare.  Rushing and it's clear out, bright sunny sky, middle of the day, but I try to get through a red light and I don't make it.  Or rather, I make it but the car doesn't.

That one instant -- there's the regret.  The wish that I could turn back the clock, like Superman, just 30 seconds.  Not try to make the light.  Wait there patiently, even though the baby has a fever; even though she's crying; even though she probably has some kind of horrible infection.

I am constantly scrambling with that baby.  I missed her jaundice, failed to notice because we were locked up together in a cold winter bedroom that she was turning colour, turning yellow like a bog man, until her grandmother came over and said, "That baby is yellow."  It's been a lifetime of scrambling ever since.

But if only, I think.  If only I could turn off the scrambling for just half a minute and sit still.  She'll wait.

She did wait.  It takes a lot longer to get a tow truck than it does to wait patiently for a red light.

And the regret... twenty years later, it's still so deep it’s never seen the light of day.

Eleven years ago, the perfect fall.  Cool days, gentle days with a newborn baby, brand-new life in the sukkah, sweet, soft Chanukah memories of snow and rain and slush and all the soft ways the world was padded eleven years ago.  All the good memories blur together -- baby in a sling, baby on a slide, cool sunny fall day with Eli in the park, how often were we together, how often was he lucid?  But he was.  For a moment, he was.

And then that one instant -- which wasn't an instant, just a niggling that grew all the next year until it took my father away and by the next bitter-cold, jagged-edge Chanukah, the Chanukah when even the latkes were too toxic for him to swallow, he was almost gone.

Where is the regret?  Which moment would I go back to?  The sweet and soft and new life of eleven years ago?  Or the shriveled, tired, sad old life of ten years ago?
This is a regret too large to contain and I can't say where I would go if I could.

One week ago, I lay and cuddled with my children here in this home away from home, this home that has become my home but isn’t quite a home but it’s the only home we have.

(Interestingly, in Hebrew, there is no distinction between the words “house” and “home”; they’re both בית / bayit.  As soon as you move in, you’re home.  I wonder if this says something about the Israeli mindset.)

We cuddled and they told me about their day, as they do every day.

NR was annoyed because she's 13 and telling your mother about your day is Not Cool.  GZ was impatient to get on with his computer time.  But here I was insisting we all be in the bedroom, on the bed, lying down and relaxing, if only for a minute.

And in that minute, a thief crept in.  Not a figurative thief but a literal one.

It would be melodramatic to tell you he took our sense of being secure and comfortable in our own home.  But one child cried and cried and cried bitterly because it is truly impossible to feel safe knowing someone has just been here without your permission.

“Ah, she was wearing a short skirt,” you might say.  “She was out after midnight.  That explains everything.  Asking for it, really.”

And again—here, too—there is that moment of regret.  Lock the door, I whisper frantically to myself from one week ago.  Cuddle the kids, but first lock the door.  You are not alone.

That split second, like running the almost-red light, like missing the beauty of that innocent gentle fall, and the entire decision is made for me and there is no turning back.

You deserve whatever you get.

These are regrets too large to contain.

If I had a friend, I would tell the friend.  The friend would listen and tell me her regrets and we would be close.  Thick as thieves.  Thick as tree branches that are good for climbing.  Thick as Jell-O butterscotch pudding™, artificial and orange yet sweet, ever so sweet.

Did I say three regrets?  This is the fourth.  And it is so large it encompasses them all.

There is no friend to tell any of this to.  And that is a regret so great, it has no size.  It contains universes.

This regret has no one moment I can put my finger on where I could have done something differently.  Just a lingering feeling that things should be different.  That it’s too late now.

That there’s nothing left to do but be here all alone, with my regret.