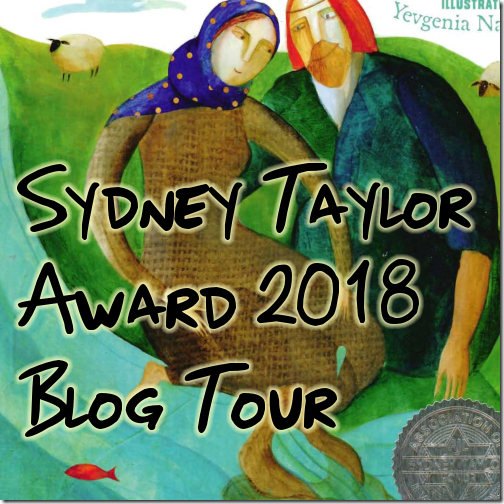 Welcome to visitors here with the Sydney Taylor Award blog tour!  You can find a full list of hosts and featured books at the Association of Jewish Libraries site.  There are some amazing selections this year.  In fact, that’s what I’m going to be talking about – a wonderful new Jewish kids’ book.

If you’re not fascinated by Rabbi Akiva, it’s probably because you just don’t know enough about him.  Who wouldn’t be inspired by the tale of someone who comes to Torah learning late in life but persists until he becomes not just an expert, but one of the greatest heroes of the Jewish world.

The problem is, how do you turn a figure commonly thought of as being more like this… 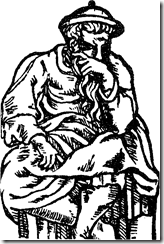 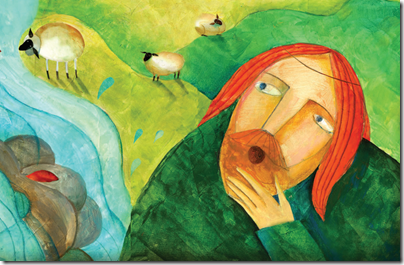 so that kids can actually enjoy the story and start to understand its full meaning?

Well, that’s exactly what author Jacqueline Jules (left) and illustrator Yevgenia Nayberg (right) have done with Drop by Drop: A Story of Rabbi Akiva, which turns this classic and often-told tale into a kids’ story that will make a great addition to any family’s Jewish bookshelf.

Along with Yaffa and Fatima, Shalom, Salaam, The Language of Angels and others, their book has now won the 2018 Association of Jewish Libraries’ Sydney Taylor Award for “outstanding books that portray the Jewish experience.” 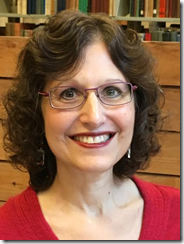 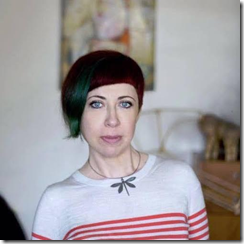 I feel lucky to have had the chance to send Jacqueline and Yevgenia a quick Q&A, and I’m excited to share their responses with you here:

Tzivia (that’s me):  Jacqueline, why do you think Rabbi Akiva is an important figure for kids to learn about in the year 2018?

Jacqueline Jules:  Rabbi Akiva’s story of learning to read at age 40 is an amazing role model for children and people of any age. Akiva’s realization that he could tackle his goal one step at a time, or drop by drop, just as water wears away stone, is a beautiful and inspiring metaphor. This story shows children that with persistence and patience we can all pursue our dreams.

Tzivia:  Yevgenia, The illustrations for this book are so rich and multi-textured.  What made you choose to incorporate actual fabric textures into the illustrations?  (And how did you do it...?)

Yevgenia:  Fabric textures are not the only “actual” textures I use in the book; there are a few different organic ones. My characters are highly stylized, so adding a realistic texture creates an interesting juxtaposition. 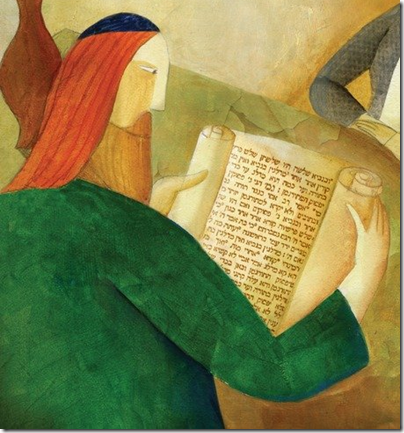 Tzivia: Another question for Jacqueline: although in the book Rabbi Akiva gives full credit to his wife Rachel for standing by him while he was studying Torah, the book also depicts her in very traditional female roles: scrubbing the house, for instance.  Do you think of Rachel as a role model for today's girls?

Jacqueline: That is an interesting dilemma for modern sensitivities. Should a figure from the past be judged by our current standards or the standards of his/her time? Rachel was certainly a traditional housewife who sacrificed herself for her husband’s career. On the other hand, she was given credit by the rabbis for helping her husband in a time when women were rarely recognized. If we acknowledge Rachel through the lens of her own era, then we can see her as a model of someone who bolstered the self-image of someone she loved. She believed in Akiva even when he doubted himself. Watch any awards show. Countless winners will attribute their success to a parent, grandparent, teacher, friend, or spouse who believed in their ability and encouraged them to continue through disappointing times. Having a cheerleader who never doubts we can succeed is a wonderful gift. Rachel was that person for Akiva.

Tzivia:  Okay… Yevgenia’s turn:  I’m wondering how familiar you were with the story of Rabbi Akiva before you began working on this project?  What did you learn about him while you were working that helped inspire you?

Yevgenia:  Surprisingly, I remember very clearly the first time I heard the Rabbi Akiva story. I was seventeen years old in Kiev. It was an all-girls high school re-enactment of the tale.  When I read Jacqueline’s manuscript, I had a strong sense that more than anything it was a love story. The growth and the strengthening of love is what ultimately inspired me. 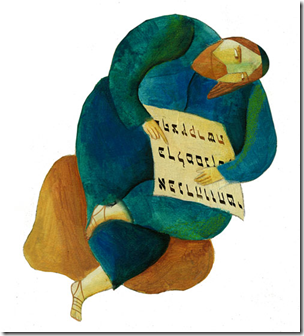 Tzivia:  And finally, one last question for Jacqueline:  A number of your stories are adapted from traditional legends or Biblical stories.  How do you choose which ones you'll adapt for today's kids?  Are there any that you're really hoping to write, now or in the future...?

Jacqueline: Many Bible stories are not particularly kid friendly. They portray adul 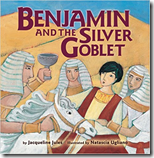 t concerns and themes. I scour traditional sources to find Jewish stories which I feel have the potential to connect with children. Drop by Drop: A Story of Rabbi Akiva gives an ancient example of someone facing a challenge all children encounter. How do I learn to read? At first, it seems like an unreachable goal. For some children, these feelings are more intense than for others. But all children must learn to break down any new skill into small manageable parts. Rabbi Akiva’s story was relatively easy to write because it was contained in a simple anecdote. I could focus on fleshing out the characters and setting in a straightforward retelling. While in my other Bible stories, such as Sarah Laughs or Benjamin and the Silver Goblet, I struggled to condense the Torah text and make it palatable to children. I 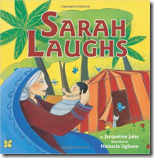 am a big fan of Jewish folklore and I do hope to retell folktales in the future. In recent years, folklore has lost some of its popularity in the children’s publishing market. I hope it will see a resurgence in coming years. My forthcoming book with Wisdom Tales (2019), The Generous Fish, is an environmental fable inspired by Jewish folklore.

Thanks for participating, Jacqueline and Yevgenia!  You can learn more about the process of creating this book from Jacqueline’s perspective through her short posts here:

And again, there’s a full list of hosts and featured books at the Association of Jewish Libraries site ; I invite you to check out ALL of this year’s wonderful winners!!!