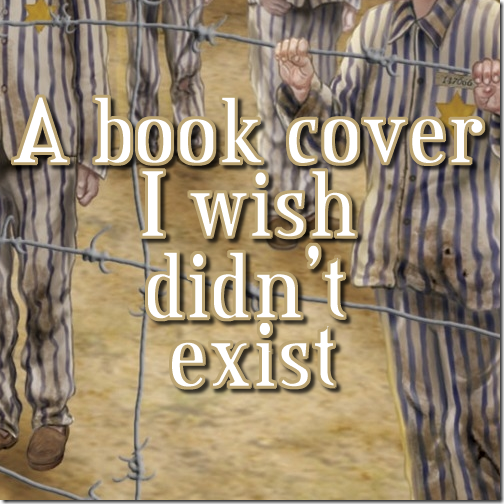 What do you think – am I overthinking this?

Before I tell you what this post is about, let me first say that I believe “over” thinking isn’t always a bad thing.  Given how many people in the world under think things, including certain book publishers, it’s a good thing some of us are thinking more than others…

I also want to admit that this wasn’t going to be a blog post.  There’s just too much at stake, I feel.  Too much emotionally riding on this.  Some of those near and dear to me has already heard my rant about this children’s book cover.  Some have agreed.  Some have just shrugged.

But last night, working on an essay about images of male Jews and masculinity in Judaism, it all just came out on paper and I figured once it’s out, I may as well share it here, too.

The book is called “What was the Holocaust?”.  Amazon says it’s published by Penguin Workshop and isn’t due out until June 2018, but that can’t be right because I first saw this a long time ago now.  I pointed it out to my husband in a bookstore in Toronto in July.  So it definitely already exists. 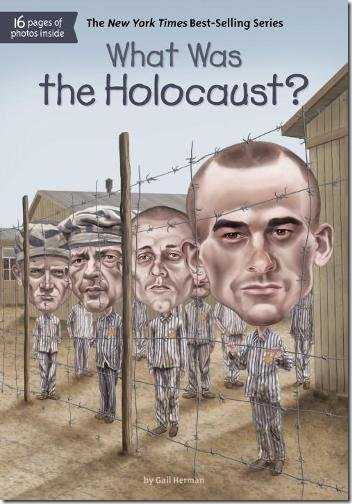 What’s your gut reaction to that picture?

Think I’m blowing things out of proportion?  (Um, like the illustrator obviosuly did with their heads?)

Now, before I tell you what I think, I will back up and point out that this book is part of a series of “big-head books” about history and a whole bunch of other things: 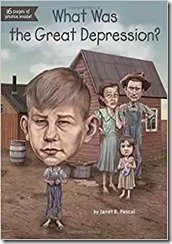 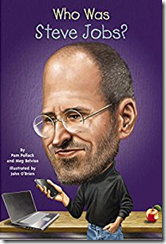 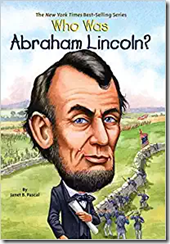 I’ve read a couple of these books with my kids, and they’re generally okay, if not stellar.

But my gut reaction, which hasn’t gone away even after seeing the cover above many, MANY times at least over the last year is – don’t put big heads on my Holocaust people.  Just don’t.

This book cover illustrates Jews as the world saw them emerging from the concentration camps and displaced person’s camps, making their way to North America in the late 1940s and early 1950s – emaciated, weak, trapped, in this case behind an exceedingly flimsy-looking barbed-wire fence.

Here’s a partial list of details that bothered me about the “Holocaust” book cover specifically:

Also, given that most of these people were living skeletons by the time they were liberated, it’s very odd that in the caricature on this book, the inmates look no skinnier than Abe Lincoln, Steve Jobs, or that Great Depression family.  Okay, maybe their faces are a little more angular and bony.  Or maybe not.

I’m sure some of the details in my list of peeves were attempts at illustrating the book’s cover both accurately and in good taste – a children’s book probably wouldn’t sell well with pictures of corpses on the cover or too much mud and filth in the background.  But in that case, the solution isn’t to pretty up the cover – the solution is so simple it’s laughable – though I’m not laughing:

DON’T PUT A CARTOON OF CONCENTRATION CAMP INMATES ON THE COVER OF A CHILDREN’S BOOK.

Even if it’s a series of books with cartoons on the cover.

Even if you’ve done it as tastefully as you can. (Hint: there is no amount of “tasteful” that would work to fix these problems!)

Even if you’ve made it as historically accurate as possible.

This cover also plays on tropes that were common before the war in cartoons throughout Germany and the rest of Europe – disgusting, filthy cartoons that showed Jews with overlarge heads and bulging, oversized noses, ears, and eyes.

I’m not going to say its overtly antisemitic, because clearly the intention of the book is to teach about the atrocities that were done to the Jews, not to torment Jews any further.  But don’t use these images to sell your book.  Find something else to put on the cover.

In a weird little postscript, as I went to put up this blog post, I noticed something odd – there are two versions of this cover. 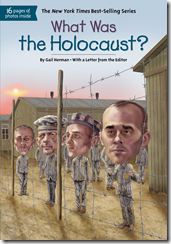 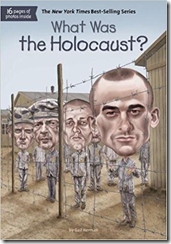 The version on the left seems to be the ORIGINAL version.  So they have fixed at least one of my wish-list items – the sun is no longer shining in the 2018 edition.  What else is up in the revised version?

I’d really love to hear from the publisher about some of the decisions that went into these changes!  But at least, if I’m overthinking this thing, now you know that there’s somebody at the publisher who’s put even more thought into it than I have – even if they went with the idiotic decision of believing that different heads, and different sized heads, would make everything all right.

It’s not all right.

Don’t kick us when we’re down.  Don’t turn the Shoah into a cartoon.  Especially not one you’re going to turn around and use to sell books.

But I’m curious - what do YOU think?  Is this just a jolly book cover that’s suitable for children – or is this book cover a desecration of 6 million plus victims of the Shoah?

(And if you agree with me, even a little, what would you tell the publisher if you could???)