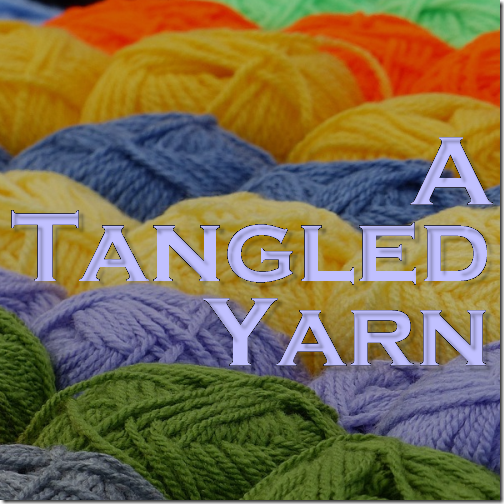 There's so much despair in those words; so much hope. 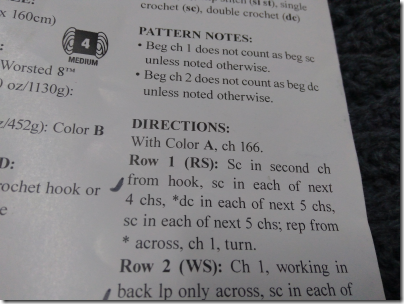 In case you’ve never crocheted, I’ll fill you in:  almost every blanket pattern starts the same way – by telling you to make a chain - a long, long, long chain, in this case, 166 stitches long.

(Unless it's the kind of blanket where you make squares and stitch them together, in which case what you have isn't a blanket pattern but a square patterns.)

You can't mess around with this chain, either, because it  will eventually be the width (or length) of your blanket.  So don't make those stitches too tight or you'll have a scrunched-up weeny blanket.  Or too loose, or you'll have a flopsy blanket with no structure. 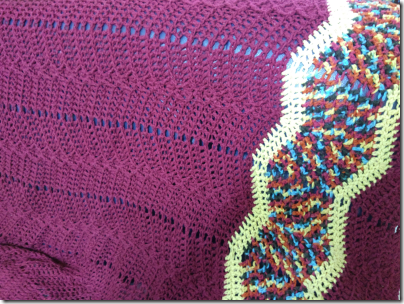 I never used to know anything about knitting or crocheting.  It’s possible, like most people I encounter, I assumed they were the same thing.

Now I know that there are many differences.  If you want to know if a person is knitting or crocheting (at the very least, so you don't sound foolish), look at the number of sticks they're holding.  Two sticks (especially if they're pointy) is knitting.  One stick (especially if it has a hook at the end) is crocheting.

This blanket I just started uses 7 balls of yarn, and each ball of yarn is 448 metres.  That's over 3km (about 1.95 miles, for those of you who still think in miles).  It's a long way to crochet, especially considering that when you crochet, you're essentially compacting that 3km of yarn into a rectangle that's a nice comfy size to pull over a human person.

It's a long way to crochet, considering that each stitch is mere millimetres in width.  You're essentially walking a marathon in teeny tiny slippers. 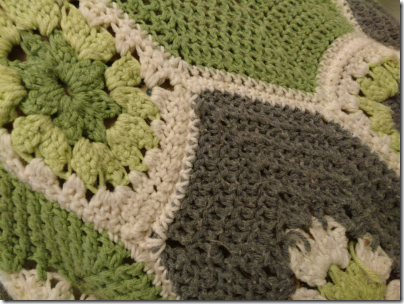 Were you wondering which is better, knitting or crocheting?  I bet you were.  This site claims to have the definitive answer, once and for all – crocheting:

Pretty much the only thing people would rather knit than crochet is a sweater. So for projects that are a sweater, pull out the knitting needles. For everything else, grab a hook because crocheting's where it's at. And so, I think you will find that crocheting, as whole, is better than knitting.

It’s possible that the site is just a little bit biased – its name, for example, is “JJ Crochet,” and it sells “original crochet designs.”  It would be awfully strange if they came out on a site like that and told you that knitting was better:

“We were wrong.  Please… leave here this minute and go find a knitting website instead.”

In my experience, crochet is easier.  I underwent a couple of attempts to learn to knit, albeit as a child, and never succeeded.  Whereas I taught myself to crochet using YouTube in just a day or two – albeit as an adult.  Perhaps it’s just easier if you’re an adult.  They didn’t have YouTube when I was a kid.

On the other hand, crochet is chunkier and boxier, while knitting is thinner, stretchier, and more versatile, shape-wise.  That website is absolutely right that if you’re making a sweater, you should definitely think about knitting, unless you feel like crocheting the kind of odd-looking, boxy sweater they show off in crocheting books to “prove” that crochet can hold its own against knitting.

In the sweater department, they’re wrong.  It definitely can’t.

I think crochet people have an inferiority complex – perhaps due to the fact that crochet is often part of knitting, used to finish seams or edges, while knitting is not part of crochet.  It’s kind of the same way that yummy chocolate desserts often have vanilla in them, while yummy vanilla desserts are sadly devoid of chocolate. 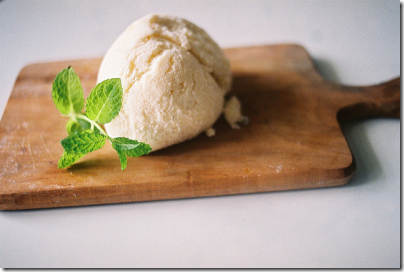 (Image credit: allie pasquier via flickr – but who the heck puts ice cream on a cutting board???)

Crochet designers are always trying to come up with ways to crochet that “look just like knitting!”  Google it if you’re not aware, it’s kind of extraordinary.  This is part of the inferiority complex.  I feel like if you’re going to crochet, you should just lean into it and crochet in a way that looks like crochet, but I guess there are some people out there who are maybe closet knit-aficionados who just never could master using that second (pointy) stick.

Besides, a lot of knit-look crochet just ends up looking like regular crochet turned sideways (there’s a reason for that – crochet is not generally stretchy, but it has more stretch in the sideways direction, meaning if you turn it sideways, it will automatically be more “knit-like” in this way, at least.) 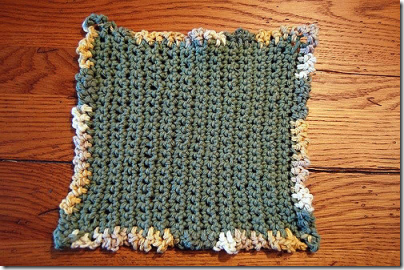 Like I said, I believe in leaning into it.  I’m making a blanket that’s unabashedly crocheted, and I’ve only just begun, which means I have almost the whole marathon ahead of me.  But there is hope.  The blanket is just reaching the stage where it’s wider than a scarf would be – so if I go out in public with it, people won’t assume I’m making a scarf.

It’s not really a question, is it?  They’re just assuming.  It frustrates me to be told I’m making a scarf when I’m not.  It’s a blanket, just… a very thin one as of yet.  Thank you very much.

Nope, not knitting.  Not scarf.  Blanket.  So far, a teensy-weensy blanket.  But a blanket nonetheless.  Despair… and hope.  I have done this before, and I know: it will be a blanket someday. 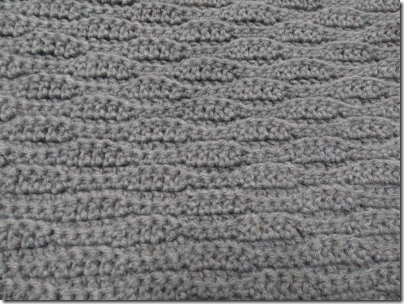 Sometimes, as I crochet, a hair falls into what I’m doing.  When I make challah, I cover my hair specifically so that doesn’t happen, but with crochet, I figure what’s the harm.  This would be a good blanket if I had grey hair, but I don’t yet – they’re still brown, but still, the colour I’m working with usually camouflages the hairs nicely.

I like to think I am knitting myself into the blanket.  “Ah, you think there is only 3km of yarn in that blanket?  You’re wrong – there’s 3km of yarn, and an extra couple of metres of my hair.  There’s me in that blanket.”

In the olden days, they used to keep pictures made of hair – dead relatives’ hair. 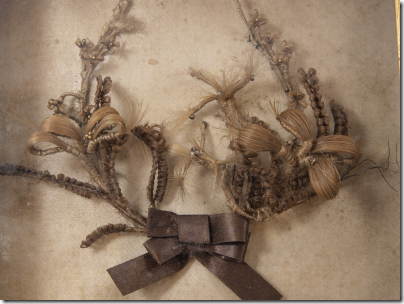 Gross, right?  But some sentimental people thought this was a good idea.  I, on the other hand, prefer to pass on a piece of myself physically (while still very much alive!) in a less obvious way that the receiver will almost certainly enjoy without having to think about overly much.

It’s possible that the hairs come out in the wash.  I haven’t tested this scientifically.

All I know is that when I crochet, I put myself in there, too.  At least as much as I’m putting yarn into what I’m making, I’m also putting myself.

And so I know, as you do, too, if you have ever crocheted, the hope – and the despair – in those first words:  “With colour A, chain 166.”  So many stitches, kilometres of stitches, still to go.  Miles to walk before I can rest, curled up under a blanket that is me, crocheted by my very own hands.