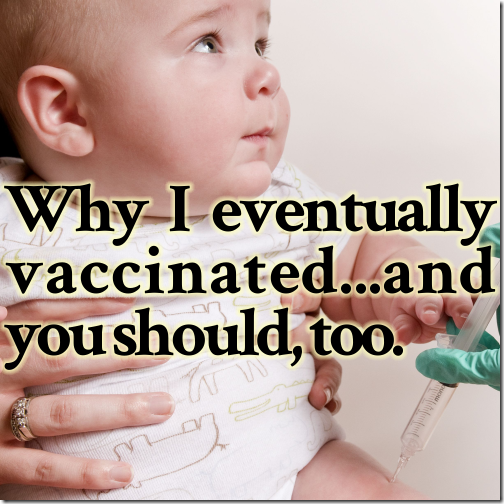 Tons of people – generally intelligent, thoughtful, loving moms, are petrified that they’re going to subject their baby to a procedure that’s going to wind up causing problems.

It’s the ultimate nightmare:  you deliver your happy, healthy, kicking, sunny baby to a doctor for a needle.  After a few hours of screaming, the baby settles down, and you’re thankful that it’s over… until a few weeks later when your baby starts to CHANGE.

I’ve read Jenny McCarthy’s book and tons of blogs and articles from mamas who have experienced this or something very much like it.

I read so many that by the time my third child was born, I decided not to vaccinate.  I had already vaccinated the first two, but I figured it wasn’t too late.  I was doing everything differently:  warmer, fuzzier, more bonded, more attachment, more nurturing; cloth diapering, breastfeeding, babywearing.

I was a brand-new mom.  A better mom.

Oh, I didn’t say we weren’t going to vaccinate her.  I said I was “delaying” her vaccinations.  I said I was “thinking about it.”  But I was convinced.  Received wisdom was wrong and there was stuff in there that could hurt my baby.

I held out for a year, worrying every time I heard about a child with whooping cough (there are still outbreaks from time to time), but she was healthy as anything, and I wasn’t all that worried.  We were breastfeeding, so I figured she had my immunities boosting her own.  With all the love we shared, she’d be just fine.

But round about a year, I started noticing the hype around vaccination was getting more and more shrill.  In the online attachment parenting communities where I loved to hang out, I started noticing how this medical decision was galvanizing parents like nothing else – oh, okay, except maybe the decision to circumcise their babies.

In both cases, the philosophy was clear:  those who do it are HURTING their baby; they’re basically evil moms, no matter how much they cosleep or breastfeed or homeschool – no matter how many other nurturing practices they follow.

Like I said, it was getting shrill.  And the experts were… honestly?  Not all that expert.  Mostly not doctors, that’s for sure.  And if they were doctors, they were generally associated with other “out-there” kinds of causes.  And very rarely did they cite current sources.  All very suspicious, really, when you tot it up in your head rather than just hop down into the mud for the usual nice squishy online pig-wrestle.

Fortunately, there was one person I trusted:  my family doctor.

I’d been going to her for years before I had kids and she has this no-BS manner that just totally clicked with me.  She’s not warm and fuzzy, but she respects warm and fuzzy and had listened patiently when I said I had decided to delay vaccination.  She didn’t push me into it.

In fact, once I’d told her I was delaying the vaccinations, she never brought it up again.  So the conversation was my idea.

The conversation started with Thimerosal, a preservative compound that’s almost 50% mercury.  Mercury, as we all know, is bad (despite our mother letting us poke at it when the thermometer broke as kids).

Nope, she said.  She didn’t cut me off.  She wasn’t impatient. More importantly, she wasn’t hiding anything.  She showed me the ingredient list.  Told me it wasn’t in there.  If that’s what I was worried about… well, don’t.

(Here’s a sample of the hype that’s still out there about Thimerosal!)

I didn’t ask her about the other stuff.  I didn’t want to bring in the kind of “data” that the anti-vax ladies were throwing around because honestly, even I knew it wasn’t very good science.

I just wanted to know if I was going to hurt my baby.

I honestly don’t remember what else we talked about, but in the end, I realized one essential piece that I’d overlooked so far:  my doctor had read up on the issue, she wasn’t covering anything up – for instance, she acknowledged that there is a tiny risk of harm from any vaccine, which I think all parents should realize.

And still, she thought the vaccines were safe.

It wasn’t bullying – her as an M.D. knowing more than me as an M.A.M.A.  There was no BS, no cover-up.  It wasn’t about her denying my gut instincts as a mom.  It was nothing personal at all.  She’s all business, and for her, the vaccination issue was just about getting on with the business of caring for my baby the best I could.

In a nutshell:  she thought my baby, my precious baby, would probably be healthier and maybe even live longer, if I let her vaccinate.

That was almost 11 years ago.  Which is why I am surprised that the vaccine “debate” is not only still around – it seems to be gathering steam.  It seems stronger than ever before.  Why?  That, I have no answer to.

It’s true what my doctor said, by the way.  There is no Thimerosal in any routine children’s vaccines in Canada.

Not in the U.S. either.  The FDA says "At present, all routinely recommended vaccines for U.S. infants are available only as thimerosal-free formulations or contain only trace amounts of thimerosal (≤1 than micrograms mercury per dose), with the exception of inactivated influenza vaccine."

The CDC agrees, adding that "Thimerosal was taken out of childhood vaccines in the United States in 2001. Measles, mumps, and rubella (MMR) vaccines do not and never did contain thimerosal. Varicella (chickenpox), inactivated polio (IPV), and pneumococcal conjugate vaccines have also never contained thimerosal. Influenza (flu) vaccines are currently available in both thimerosal-containing (for multi-dose vaccine vials) and thimerosal-free versions."

This information’s been out there for a while.  So why doesn’t it reassure parents who are anti-vaccination? Why don't they all rush out and get their kids vaccinated when they realize the thimerosal is gone?

Because they have already decided that vaccines are harmful.  People’s views in this debate, as in the debate on circumcision, have little or nothing to do with science.

And that’s a shame.  Because while it is true that vaccines aren't always effective. And yes, children are occasionally (rarely) harmed by vaccines. But they are THE BEST THING WE'VE GOT.

Parents choosing not to vaccinate should be asked which of the many devastating and common childhood illnesses they would choose for their own children.  Let’s see…

This is what my doctor told me, probably in as few words as possible, because she is a no-nonsense but caring person who doesn’t beat around the bush:

As parents, all we can do is give our kids the best shot at a healthy life. There are enough scary things in the world that we don't have to invite deadly, debilitating childhood illnesses to take their toll as well.

By the way, any article about vaccination that fails to mention the good they've done over the last century is not just hopelessly biased - it's bad science. Not just bad, but evil.  So if you’re reading an article that’s all bad news about vaccines, think about your child’s muscles being destroyed by polio.  Scroll up to take a look at those pictures again.

Here's the bottom line: VACCINES HELP YOUR CHILDREN (and mine) NOT DIE SO MUCH, SO SOON.

Anyone who likes the idea of more children dying, of really horrible things, can go right on ahead telling parents that vaccines are evil (please don’t? pretty please?). But I wish they wouldn’t hide behind logic or science or responsible medicine, because those are definitely on the side of children living longer and better.

I’ll get down off my soapbox now, but will be very vigilant about moderating comments to this post.  I won’t censor anybody who wants to link to actual studies, data, and real science, however.