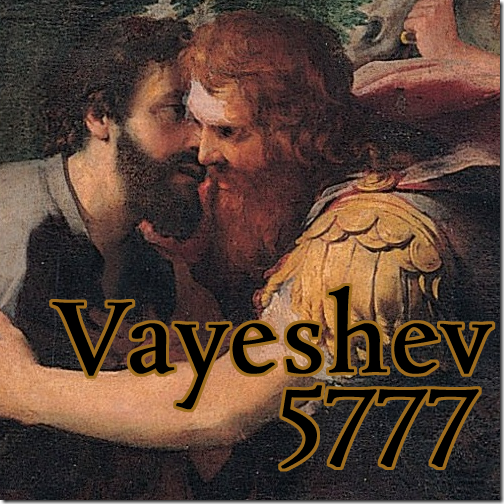 My mother recently spent two Shabboses (Shabbatot) with us here in Israel.  In her honour, I actually put together an unprecedented TWO divrei Torah in a row.  This is the second one, which was not too fancy because I was just planning to say it over privately over lunch but then we ended up having guests, and I think it went over nicely.  Sorry it’s too late for this year – I was too busy visiting to post!

Last week’s parsha, Vayeitzei, ended in sort of a cliff-hanger, as Yaakov set off to reunite with his brother Eisav. As this week’s parsha opens, we see that Yaakov is preparing for his meeting with Eisav – and he is very, very afraid.

This fear reminds us, as it should, of several parshiyos from now, when the shevatim go down to Mitzrayim and are afraid of Yosef when they realize who they have been dealing with there.

There are many similarities here anyway: parting on bad terms, a separation of decades, a reversal of fortunes (Yaakov, the mild-mannered son, has become the leader of a large family and a person of great wealth; Yosef, the wimpy little prognosticator, has become the ruler of Egypt.).

Here’s another similarity: When Yosef reveals himself to his brothers, וַיִּתֵּן אֶת-קֹלוֹ, בִּבְכִי, “he wept aloud.” And Eisav, too, the big bad Eisav, bursts out in tears, as it says, וַיִּבְכּֽוּ, - and they wept. Both of them. All of the other similarities between these stories suggest that Eisav, too, is sincere, at least in that moment (though a midrash goes on to say he bit Yaakov’s neck).

But an earlier question must be asked: why is Yaakov afraid when Hashem says not to be? Hashem has already said go back to eretz Yisrael וְאֵיטִ֥יבָה עִמָּֽךְ: / and I’ll make it good for you.

To understand this, it also helps to pin down exactly what Yaakov is feeling. His emotion was not simple fear, as it appears to be on the surface. The parsha hints at this when it says, “Then Jacob was greatly afraid and distressed.” (32: 8) / וַיִּירָ֧א יַֽעֲקֹ֛ב מְאֹ֖ד וַיֵּ֣צֶר ל֑וֹ

Because the Torah doesn’t waste words, these two ideas, fear and distress, are obviously two different things. Rabbi Jonathan Sacks explains that “he was afraid” means afraid that he might be killed:

Fearing your own death is a simple concern that we can understand easily. Fearing that you may come to kill is a moral concern, a higher level of caring for the people around you. It is the kind of fear that a scholar like Yaakov will have as he goes into battle.

Rabbi Sacks writes that after the six-day war in 1967, instead of a mood of victory over the great military triumphs of that war, the mood in Israel was sombre. As Yitzchak Rabin said at the time, “the terrible price which our enemies paid touched the hearts of many of our men.”

Rabbi Sacks concludes, “A people capable of feeling distress, even in victory, is one that knows the tragic complexity of the moral life.”

A quote commonly attributed to Golda Meir (which she may not have actually said), reads, “…We will perhaps in time be able to forgive the Arabs for killing our sons, but it will be harder for us to forgive them for having forced our sons to become killers.”

Another saying is that if you wrestle with a pig, you just get dirty. (And besides, the saying goes on, the pig likes it.)

For a man who was primarily described as a scholar, yoshev ohalim, Yaakov ends up doing quite a serious amount of wrestling in his lifetime.

As his namesake, of course, we are still wrestling.

What Yaakov perhaps feared most was the loss of his innocence, the holy glow of Torah. This is the trade-off between leading a holy life set apart from the world and getting mired in the muck as you wrestle with the pigs.

We are still caught up in this wrestling match today. As Yaakov did, we as a nation plan, we strategize, we pray… and then we go out to meet our enemies, with fear in our hearts, but strong and courageous nonetheless. And the fear in our hearts, along with the tears in our eyes, are not simply that we ourselves may be hurt or even wiped off the face of the earth. It is the fear that we will not only be killed but will be forced to become killers.

Here in Israel, we live with this fear every day. The eyes of the world are on us and often, these days, all they see is the killer and not the scholar; Hashem’s soldiers and not his messengers. As we prepare for the festival of Chanukah, let us remember that the Chashmonaim won their battles not by might but through their clear vision of Hashem’s will. Just as they focused, even in the midst of battle and fear, on our holy task as messengers of light, so too may each of us be a little light to the world in a very dark time.