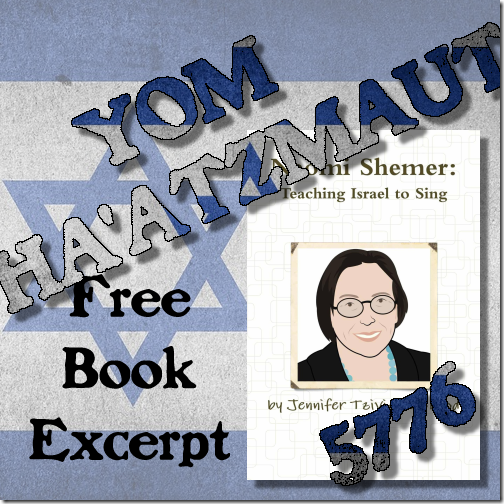 Yom Ha-what???  Yeah, I admit, we never really did anything special for Yom Ha’Atzmaut, Israel Independence Day, before moving to Israel.  And neither did most of the Jews around me.

Sure, some years we had a flag, maybe even a car flag, but really, that was the extent of it.

It’s so incredible celebrating every single yom tov and chag here in Israel… but especially Yom Ha’Atzmaut.  It just makes sense, but I never gave it much thought before we made aliyah.  Indeed, huge swathes of the Jewish world as I knew it outside of Israel didn’t really celebrate Yom Ha’Atzmaut at all… and that, I’m convinced, is a shame.

And when it comes to Israel, there’s no better way to study its history than by studying its STORIES, the stories of the people who built this incredible place.

The history of modern Israel is inseparable from the story of the life of Naomi Shemer. Born in 1930, she grew up as the country became more mature and established, and became an adult exactly as the country was becoming independent.

So many of the great “folk songs” of Israel’s 20th century were created by Naomi Shemer, but what has always really impressed me is that her writing goes far deeper than the 20th century, all the way back to the times of the nevi’im (prophets) and the words of the Tanach. Though she and her family were not religious, Israel was for her deeply spiritual – more than a homeland, it was a place Jews could live and thrive like nowhere else in the world.

She travelled and spoke passable English but never really reached much fame even in the Jewish world outside of Israel, besides her song Yerushalayim Shel Zahav, Jerusalem of Gold, written just before the six-day war in which the Jews won back the city after thousands of years. (Here’s one version of the song with translated lyrics, sung by Ofra Haza.)

In honour of Israel’s 68th Independence Day this week, I’m sharing an excerpt from my book, Naomi Shemer: Teaching Israel to Sing.

I started writing this book in 2005 after my daughter Naomi Rivka was born and we named her – partly – after Naomi Shemer. I wanted her to really understand who this namesake was. But I didn’t actually finish it until 2013, in the final stages of planning our own move to Israel. Throughout that time, my knowledge and understanding broadened and deepened considerably – as it has continued to do during the almost three years we’ve lived here so far.

Throughout the book, I’ve tried to use scenes from Naomi Shemer’s life, along with her poetic, poignant lyrics, to explore the history of Israel and tie it in with the history of the Jewish people all over the world. It’s history, but the kind of history I love best: one that sets important events within a context that’s enjoyable for adults to read alone or with children. 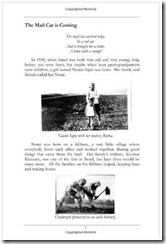 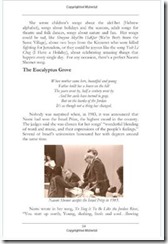 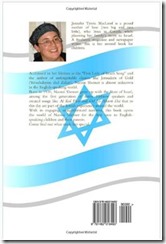 There are the Hills of the Golan

There are days when the greenery

And seventyfold is the blue of the sky…

But even if I become poverty-stricken…

How can I betray you,how can I forget?

In school, Nomi read the poetry of Rachel, a famous Israeli poet who died the year after Nomi was born.  Her full name was Rachel Bluwstein Sela, but even today, you can just say “Rachel” and every Israeli who has learned poetry will know who she was. 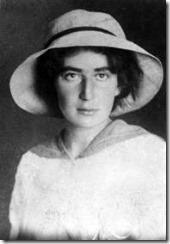 In one of Rachel’s poems, Kinneret, she wrote fondly of the great Mount Hermon as the “sleeping grandfather” of Israel’s beautiful north.  Nomi, too, was especially proud of Israel’s north and eventually turned some of Rachel’s poems into popular songs.  The poem Kinneret became the slow, haunting song Sham Harei Golan. 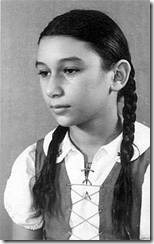 Naomi Sapir as a young girl.

Growing up, Nomi studied Israel’s history – both ancient stories in the Tanach, the Jewish Bible, about the first Jews in the land, and the modern stories of chalutzim.

She was part of the first generation to grow up speaking Hebrew.  Even though the language is very old, Israel had been conquered so many times over its long history that most of the Jews living there spoke a noisy mixture of Arabic, German, French, Yiddish and Ladino.

When large groups of people started coming from Europe, Eliezer Ben-Yehuda (he was born in Lithuania as Eliezer Yitzchak Perlman) created the modern Hebrew language.  Some words were already in the language – like words for Torah study, prayer and holy things.  But many everyday words were missing – words like “newspaper,” “train” and “rice.”

Imagine making up a new language!  Ben-Yehuda and others like him believed very strongly that Hebrew should be the main language in Israel.

Though Ben-Yehuda died eight years before Nomi was born, he helped the language get off to a great start, and after thousands of years children could finally grow up in the Jewish homeland reading the language and its poetry, hearing its music in streets and marketplaces all over the country.

Eliezer Ben-Yehuda and his dictionary project.

As a teenager, Nomi went away to school in Jerusalem and Tel Aviv to study music.  Although Israel was a small and struggling country then, she said proudly later on that her teachers were as good as those anywhere else in the world.  Three of her teachers were quite famous:  Paul Ben-Haim, Frank Pelleg and Ilona Vincze-Kraus, who had studied in Hungary with the great composer Bela Bartok.

We’re Both from the Same Village

What is there to say,

for we are both from the same village?...

And on Friday evenings,

when a soft breezes

passes through the black treetops,

When Nomi came home from studying music, she became a music teacher for all the kibbutz’s children.  She started writing kids’ songs about holidays and friendship and the seasons.  One song was about the little red postal truck that came every day to the kibbutz, and how excited the children were to get mail from other places in Israel and maybe even other countries.  Before modern technology, getting a letter was thrilling enough to write a song about!

While Nomi was a teenager, Jews in Europe were living through terrible times.  A leader named Hitler had taken over the country of Germany, where lots of Jews lived, and also the nearby countries of Austria, Poland and France.  He was trying to control all of Europe, and planning to kill all the Jews who lived there. 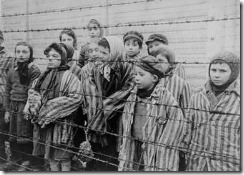 With the help of the armies of England, Canada, the United States, and other countries, Hitler was defeated.  But he had killed many, many Jews – six million altogether, along with millions of other people he didn’t think deserved to live.

The shock of what Hitler had done made the world realize that Jews needed a country of their own.  In 1948, just as Nomi was turning 18, many countries voted in the United Nations to officially create the State of Israel.

Like other Israeli 18-year-olds, she went away to serve in the army.  Even today, Israeli teenagers spend two years in the army or helping their country in other ways.  But even when she was working hard in the army, all Nomi wanted to do was sing.  Army life was hard and she worried that she’d forget how to play the piano or do other things she wanted to do.

It was not a peaceful time for Israel.  Just when the State of Israel was born, it was attacked by Arab countries all around.  But Nomi kept writing and singing about the freedom the army was trying to create for everybody who lived there.  She wrote songs that made people believe life would get better and the Jewish people would survive and be strong.

The army loved her songs!  They knew her music helped the soldiers, and they asked her to write music that would make them proud to fight and protect their new little country.  She went to work in a special division of the army called Nahal, which had a famous band and travelled around entertaining the other soldiers.  That was always what Nomi did best. 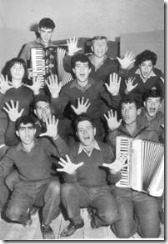 Nahal entertainers in the 1950s (without Naomi Shemer). 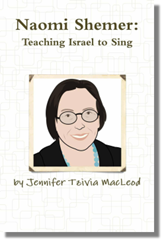 Naomi Shemer: Teaching Israel to Sing is less than $5 for the full book – $2.99 for instant Kindle download, $4.99 for print (still time to get it before Yom Ha’Atzmaut!)

I hope you’ll click through and read the whole thing, by yourself or with your kids! 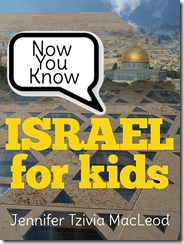 I’d also love to hear what books YOU’RE using to share ideas about Israel with your kids, at Yom Ha’Atzmaut or all year long…