Trembling with Gratitude: a Sentimental Yarn 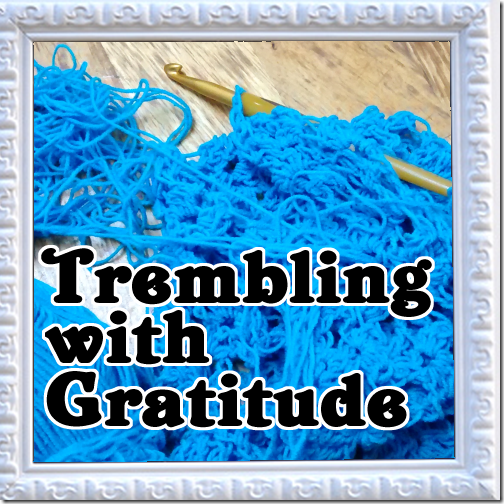 There’s a feeling when you’re crocheting and your yarn gets tangled.  Even if you don’t crochet, you’ve probably felt something like this.  A moment when everything mounts into impossibility and you want to scream and give up.

But more than that, it’s a feeling that you’re all alone in the world.

It’s your ball of yarn.  It’s your crochet project.  And it’s your snarl.

Ultimately, nobody cares if you untangle it or not.  How depressing is that?

If I stashed the project – no-one would know.

If I threw it away – I doubt anyone would notice.

If I snipped the yarn and carried on past the tangle – for sure, nobody but me would know about that.

But it’s a tangle, and there’s something both depressing and important in working through it and not taking shortcuts.

Last month, while I was in Toronto oh, so very briefly (2 days!), my mother and I were visiting an older relative.  I had brought along a big blanket project I’d been working on for more than 2 months.  I was so close to the end, but I had had to unwind a big section of it, and I did it carelessly, and the yarn kept on getting tangled as I tried to crochet it together again.

Yup, this time, the tangle was actually my fault.

I was dealing with the tangle in the worst possible way – untangling an inch, crocheting a short stretch, then bumping up against the tangle again.  Bad, bad, bad.  I was cursing myself for being too lazy to fix the thing, but promising that if I just untangled another inch, the whole thing would be clear sailing.

Okay, so it just wasn’t happening.

Except this time, I wasn’t alone.  My mother – a knitter, a spinner, a dyer, a lover of all things yarn – noticed what I was doing.

“Stop crocheting for a minute,” she said.  “I’ll untangle it for you.”

Slowly, slowly, she started working through the knots, one by one.  As she freed the yarn, I’d crochet a few millimetres more.  I guess she got annoyed, and said, “Stop it.  I can’t keep up if you do that.”  Oops.

So I stopped.  I looked out the window at the radiant sunny blue-sky March afternoon.  I looked at how much blanket I’d already made.  I looked at my mother’s hands, pulling apart the tangles, each tiny knot, one by one by one.

I’ve been a parent long enough to know that past a certain point, we can’t really solve our kids’ problems.

I’ve been a child long enough to stop hoping that my parents will make my life magical in every way.

But here’s what I learned:

Sometimes, there is a small problem that we can take into our hands, and work our way through it, and just by picking it up, just by pulling out the knots, just by running it through our fingers, we can tell our children we care.  That they are not as alone as they feel and that we know exactly how alone that can be.

A few minutes later, my mother handed me a ball of yarn.  A beautiful, tightly-wound, tangle-free perfectly spherical ball as perfect as perfect could be.  I finished the blanket that afternoon and cuddled up beneath it with the two precious sisters my mother made me years ago. 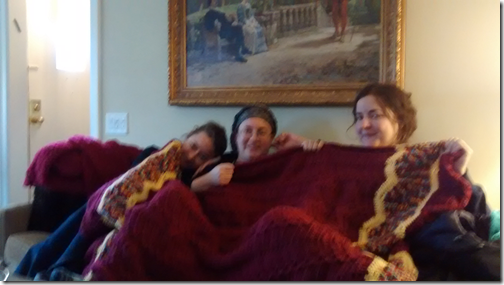 If the story was perfect, I suppose I would have wrapped my mother in the blanket instead.  Hugged her with it, maybe given it to her and said, tenderly, “This is yours.”

I didn’t.  I packed it up and took it home to the other side of the ocean, knowing I won’t see her for months.

Warts and all, life isn’t always like a story, and snarls are everywhere we turn.  But sometimes, our mothers’ beautiful fingers are there to work out the tangles, leaving us holding our breath and trembling with gratitude.