Parshas Chukas: Why you need darkness to feel the light 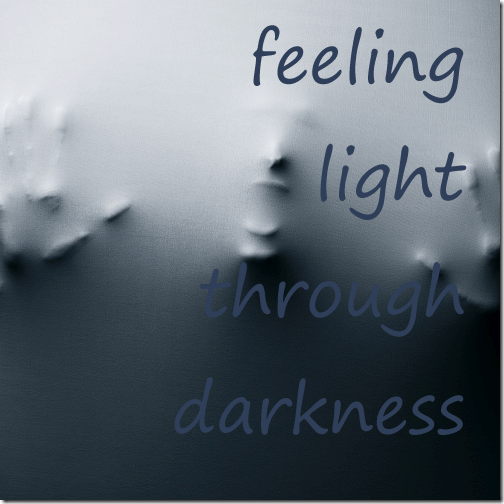 Have you ever wondered what it's like to be blind?

Picture yourself in a world of darkness, groping around, not knowing where - or what - anything is.

Last month, I got to go to the Dialogue in the Dark exhibit at the Israel Children's Museum in Holon.  You're immersed in a darkness so intense you can't see even the outlines of the other people in the room.

You're lost in a hopeless, unsolvable maze.  Are you near a wall, a door?  Are you about to bump into something?  Your only hope is to trust in the skills of your guide, an all-seeing miracle worker who can somehow navigate her way through total darkness.

Our guide was Michal.  Michal is blind, but there, in the dark, she was strong.  She knew her way around better than the back of her hand.  She memorized our names and called them out throughout the tour to make sure we didn't get lost.  She warned us about obstacles and coached us to "look" around ourselves with fingers and hands.

In the dark, Michal was strong, and we were fully dependent on her to get out of the maze alive - or at least, within the promised hour.

After the one-hour tour, we finally "met" Michal in the light.  She was shorter than most of us had pictured.  Smaller, too.  In the dark, she'd seemed like a superhero, but there in the light, she was just a little blind woman with a cane.

My older kids and I watched her leave for the day after our tour.  She made her way outside confidently enough, but slowed down as she encountered the outside world.  With the cane, she pinged her way - the long way around - through a basketball court, bumped into a chain-link fence, and awkwardly began her journey home.

The harsh light of day

I felt embarrassed, watching her.  And also, a little, disappointed.

She was no superhero; she was just a blind lady, like hundreds we'd seen before.  She seemed held back by her blindness in a way she hadn't there in the dark when we were weak and dependent on her.  If we’d met her in the light, maybe we wouldn’t have looked up to her so much, or trusted her there in the dark.

I found myself thinking about this when I turned to this week's parsha.

In Mitzrayim, bnei Yisrael felt strong.  They weren't; not really.  We can see it now very clearly, but there in the desert, they couldn't.

Out there in the desert, they run to Moshe and complain:  "Why have you taken us out of Egypt to bring us to this evil place?  It is not a place for seeds, or for fig trees, grapevines, or pomegranate trees, and there is no water to drink."

They kvetch, "Why have you brought us up out of Egypt to die in this desert?  For there is no bread and no water, and we are disgusted with this rotten bread."

They've said stuff like this many times in the course of their journeys.  They miss all the good things about Mitzrayim.

Where our eyes go wrong

Mitzrayim was the devil they knew, so to speak; the desert, trusting in and depending on Hashem, was the devil (l'havdil!) they had no clue about.

A couple of weeks ago, in parshas Shlach, we read about the meraglim, whose eyes failed them when they encountered the giants in eretz Canaan.  "We were like grasshoppers in our eyes," they said.  And what were the meraglim doing?  The parsha says they were sent "la'tur et ha-aretz" - to scout out the land.

We already know that word "la'tur" has something to do with our eyes, because we say in Shema, "velo sasuru acharei levavchem ve’acharei einechem."  “La'tur” is our eyes, tricking us into seeing what may or may not actually be real.

So what do bnei Yisrael see in the midbar, that they object to so much?  So much that they keep complaining to Moshe?

What they see is that they are lost, they are dependent.  They're panicking because away from the “light” of Mitzrayim, they feel blind.  They've been told to trust in Hashem, but Hashem, to them, feels like a world of darkness.

The eyes of their entire generation are broken.  As Hashem decided, they are broken beyond repair, and will not merit to enter eretz Yisrael.

Trust in light and darkness

This is why they question Moshe's very chosen-ness, his role and Aharon's as leaders, like they did last week in parshas Korach.

Remember, back in Mitzrayim, Moshe and Aharon were nothing special.  Maybe bnei Yisrael remember from Mitzrayim that Moshe is just an ordinary stuttering guy; disgraced former royalty, really.  Maybe they remember that Aharon grew up as a shlemiel slave boy just like the rest of them.

If Mitzrayim is the light, then the midbar, eretz Yisrael, must represent darkness.  That entire broken-eyed generation feels lost in the dark, entirely dependent, and alone.  What we hear in this parsha, over and over, are their cries for help, for leaders, for someone to save them.

The main idea of Dialogue in the Dark is role reversal.  Within the exhibit, the blind become "sighted" and are placed with in their element, while the seeing become blind.  (This perspective shift is also why I really enjoyed learning ASL from skilled, capable teachers who would normally be considered “handicapped.”)

This was also the main idea of yetzias Mitzrayim.

Bnei Yisrael were taken out of the harsh foreign setting and brought into the true shelter of Hashem's care and love.  They were given three inspired leaders who were perfect for the job.

But it was too much for them.  Too much of a shock to their system.  Dialogue in the Dark doesn't let you bring in kids 9 and under.  The experience is too scary and young kids aren’t mature enough to be calm and quiet in such an upside-down situation.

Same for that generation.

Hashem didn't blame them.  He knew it would take time, and patience.  Each time they fail in the midbar, Hashem forgives them and continues to nurture them.  Even after He decides that they’re not ready for eretz Yisrael, they don’t all die instantly but live to raise and educate the next generation, who will merit to enter the Land.

Returning to the light

Vision - and blindness - is a theme repeated throughout the Torah and Tanach.  When Avraham is about to sacrifice Yitzchak, he doesn't notice the ram trapped in the bushes until he looks up and it suddenly appears.  Or in next week's parsha(usually read with this one), where Bilam doesn't see the malach that's stopping his donkey until he looks hard and it suddenly appears.

Antoine de Saint-Exupéry wrote in The Little Prince, "It is only with the heart that one can see rightly; What is essential is invisible to the eye."

The generation of the midbar wasn’t “seeing rightly.”  They were dazzled by the riches of Mitzrayim.  Now, they feel the darkness and barrenness of the midbar and fail to notice within it Hashem's love and salvation.  They refuse to trust their guides.  They cannot see with their hearts.

At Dialogue in the Dark, it's a relief to come back into the light after an hour in darkness.  This, I imagine, is the relief that generation longed for.  Continually led astray by their eyes and their memories of Mitzrayim, they died out in the midbar.  Only their children, born to the new world, unblinded by the false light of Mitzrayim, could merit to actually enter eretz Yisrael.

As we plunge next week into the gloom of the Three Weeks and Tisha b'Av, may we perceive what the dor hamidbar could not:  Hashem's love and guidance, His gentle touch at our elbows, His gentle small voice calling out to us in the darkness.

(and look for my full review of Dialogue in the Dark on my aliyah blog next Wednesday!)