Rites of Passage: the facts of life.

So.  Ahem.  We have had… the conversation.

A couple of weeks ago, at our favourite used book store in Tel Aviv (Halper’s), Naomi Rivka picked up a copy of Judy Blume’s classic, Are You there God?  It’s Me, Margaret.  This is actually the cover – I think it’s a very early edition.

At first, reading the back-cover blurb, I couldn’t figure out what was more disturbing about the book – its famous mention of menstruation (many girls’ first) or its detailed description of Margaret’s complicated religious situation.

Margaret Simon, almost twelve, likes long hair, tuna fish, the smell of rain, and things that are pink. She’s just moved from New York City to Farbrook, New Jersey, and is anxious to fit in with her new friends—Nancy, Gretchen, and Janie. When they form a secret club to talk about private subjects like boys, bras, and getting their first periods, Margaret is happy to belong.
But none of them can believe Margaret doesn’t have religion, and that she isn’t going to the Y or the Jewish Community Center. What they don’t know is Margaret has her own very special relationship with God. She can talk to God about everything—family, friends, even Moose Freed, her secret crush.

So yeah.  Boys, bras and period.  3 things I would really rather not share with my going-on-10-year-old.

So after deliberating – and thinking about a) the allure of making it “forbidden” and b) the conversation openings the book could potentially provide – I bought it, making a mental note to Talk to Her before she got her hands on it.  And then, things being things, she grabbed the book and read most of it on the train on the way home.  Oops.

A week later, we were finally alone together and she mentioned something… I forget what… that gave me an opening.  Aha.  The Talk!

(note:  I don’t believe there IS one Talk… more on that over here)

I did it.  Yaaay, me!  We covered the basics of bodies changing, periods, menstruation, and – most importantly – asking your mother for a stash of “monthly” supplies if you need them.  I mentioned that this is womanhood, that it means you can have a baby, and that it can come anytime between around 11 and 15.

I also said that – just like losing teeth and other milestones – some girls in her class may experience some or all of these things before others.  Everybody develops eventually.  I hope I said that last bit; if I didn’t, I should soon, because I remember all too well a letter one of my sisters wrote to me despairing of ever “changing” into a woman.  She’s in her 30s now, and yes, it did happen eventually.

I didn’t draw her a picture of a uterus and ovaries.  Tried that once, many years ago, and it only provoked a stream of tears from the daughter then on the verge of maturity.  I must be very, very bad at drawing.  In fact, with that daughter, any mention of puberty provoked tears, and might still to this day, except that I have stopped trying to have The Talk.  She’s 19 now; she’ll have to figure it out for herself. 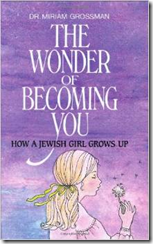 Although I can’t help thinking:  there’s a book that needs to be written.

Of course, there is one already, a classic guide for frum girls called The Wonder of Becoming You:  How a Jewish Girl Grows Up.  As the title suggests, it’s a little sappy.  Still, it seems like the only one out there.  I always meant to buy it when I had a daughter old enough, but it seems like I have already missed one window and I cannot bring myself to buy it for Naomi Rivka. 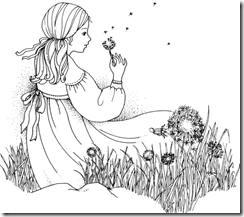 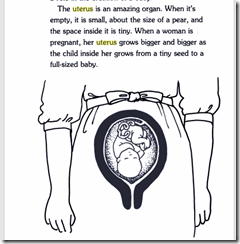 (Images from The Wonder of Becoming You, via Amazon and Google Books)

The truth is, I’ve never loved how the girl shown in the book looks to be about 8 years old and completely devoid of physical features (she’s completely shrouded in what looks like a pioneer nightgown, out on a prairie, blowing on a dandelion).  Still, I might buy it anyway, just to start another conversation.  I just wish there was one for boys.

(Amazon is recommending another book I haven’t looked at called Talking to Your Children About Intimacy: A Guide for Orthodox Jewish Parents that might be worthwhile.  Rabbi Avraham Twerski has apparently called it a must-read.  If you’ve read it, I’d love to hear from you in the Comments.)

Like I said, I don’t believe there is just one “The Talk” that you have with your kids.  This is an ongoing process as they change and mature and their understanding grows.

But I am happy and proud to have “opened” what I hope will be an ongoing dialogue.  Now all I have to do is figure out how to start a conversation about all the myriad religious issues raised by the book.  For that, I may actually have to re-read it myself.

I’d love to hear how you’ve dealt with this stuff.  I feel like even though I’ve been mommying for a very long time now (20 years!), I am kind of a beginner when it comes to this sort of thing.