REVIEW & EXCERPT: There’s a Shark in the Mikvah! A mitzvah book with BITE? 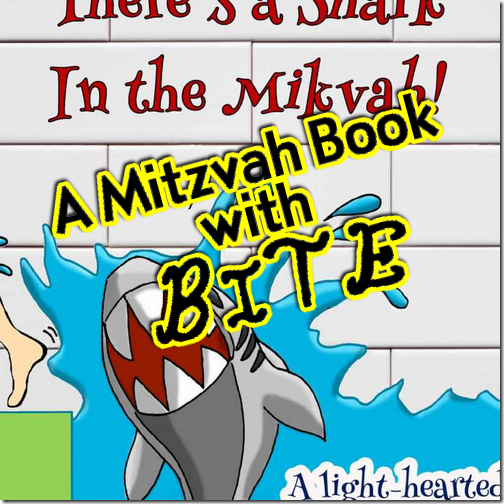 If I say “mikveh book,” do you groan inside?  Do you think of a book that might be Important to read, with a capital I?  Heavy, serious, but not all that fun?

This is not that book.

The hilarious cover gives that away immediately: 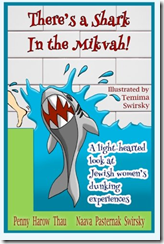 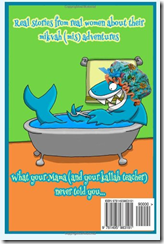 This book is called There’s a Shark in the Mikvah, and it’s a new collection of stories written by Penny Thau and Naava Swirsky.

Be prepared.  This book has bite, by which I mean attitude.  There are no bland platitudes here about the centrality of the mikveh to Jewish life… just fun, spicy anecdotes that actually add up to a very substantial whole.

You’re not only going to want to read it over and over but also buy copies for every new kallah (bride) you know to help them love this mitzvah that often gets a lousy rap.  It’s just a shame they didn’t make it in a laminated, waterproof editing that you could bring along to your pre-mikveh soak.

And I’m so excited to be able to share an excerpt from this book with you here.

Through laughter and good-humoured fun, There’s a Shark in the Mikvah underscores the mitzvah, scraping away the usual hush-hush to present a book which is at once intimate and discreet.

Although I was living in London at the time, my future husband and I flew to Israel for our wedding. The day before our wedding, we went to see the rabbi to finalize wedding details. We told the rabbi that I still needed to go to the mikvah. As we left the office, the rabbi handed me a piece of paper with the address of a local mikvah on it and instructed me to ask a taxi driver, as discreetly as possible, to take me there. The next morning, a very nervous me, along with my mother and aunt, went to the taxi stand of the hotel where we were staying. I was “makeup free” and holding a bag. As I had been told to do, I approached the window of the first taxi and showed him the piece of paper. The taxi driver looked at me, looked at my bag, looked at my entourage and said, “Are you going to the mikvah?”
I nervously replied, “Er... Just the parking lot of this address, please.”
He then said again, “Are you a kallah? You’re going to the mikvah!?”
And before I could reply, he started honking his horn to his fellow taxi drivers waiting outside and shouted out of his window – “Mazal Tov! We have a kallah!”
With that, about five or six taxi drivers got out of their taxis and started dancing with each other in a circle, singing “Mazal Tov and Siman Tov!!!”
Later on that evening, at my wedding reception at the hotel, a few of those taxi drivers came by especially to wish me Mazal Tov yet again.

It’s Not Over Until the Mikvah Lady Sings!

I have lived in Israel for the past twenty years. Every time I dunk in my local mikvah, the balanit very gently says, “kasher.” One summer I was in New York and needed to go to the mikvah. The mikvah lady greeted me warmly and showed me to one of the beautiful rooms. After my first dunk I was ready to hear a gentle “kasher,” but instead the mikvah lady belted out – in a singing voice straight out of a Broadway musical – “KOH-SHER!!!”. I was so taken aback that I had to restrain myself from laughing. I dunked a second time and again heard “KOH-SHER!!!”. It’s a good thing I only dunk three times – I don’t think I could have gone on much longer without bursting out laughing. The next month, back in Israel, I was quite relieved when I took my dip and heard a very gentle and restrained “kasher.”

(Excerpted from There’s a Shark in the Mikvah, with permission of the authors.)

Almost every story in the book is accompanied by a hand-drawn sketch by Temima Swirsky.  The pictures are cute and add a lot to the stories, but they’re not all that professional.  I didn’t mind because the book itself is such an  intimate, personal collection; almost like peeking into a bunch of women’s diaries.

Going to the mikveh isn’t always fun.  Sometimes, it’s a tragic occasion, like when a woman has lost a baby or had a hysterectomy.

The book’s last chapter deals with more serious mikveh stories, including a truly uplifting tale of a reunion.  You’ll also get to hear about the mikveh experience through the eyes of an experienced balanit, or mikveh attendant.  To say you’ll laugh AND cry is a cliche, but also, perhaps, true.

The only thing I didn’t like about this book is the title.  I liked it, but it’s a bit of a tease.  I knew there wouldn’t be an actual shark (although some of these stories do include ladies dunking in lakes and oceans), but I hoped its meaning would become clear.  However, it turns out the title refers to a song which (as explained in a footnote) is a “well-known parody of a popular Jewish tune.”  I guess I missed the memo.  Maybe, as a baalas teshuvah, I just don’t know enough popular Jewish tunes…?

So you may never find out what the shark in the mikveh actually means.  But don’t let that stop you from buying the book.

There’s a Shark in the Mikvah will delight you, and you’ll want to share it with friends, kallahs, even – someday – your own daughters as you introduce them to this mitzvah in the hope that they will keep it with love… and a sense of humour.

I suspect that a sequel is in the works, by the way.  The authors ask that you send them any mikveh stories of your own to sharkinthemikvah@yahoo.com.  I’d definitely buy the next book, and so should you.

I write books for kids!  They’re cool!  I promise!  Sign up here to keep updated with all that’s happening in the world of me-as-fledgling author.