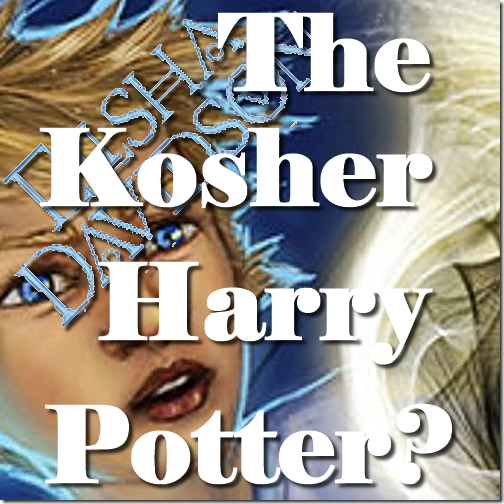 Are you ready for a wild ride?

I hope so, because writer M. R. (Rhonda) Attar has just released the first in what promises to be a trilogy of adventure books about young Elisha Davidson, Elisha Davidson and the Letters of Fire (Menorah Books:  2014). 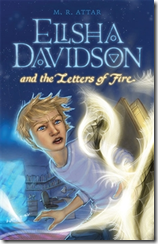 I’d call the book weird and wonderful.  But I’d also caution that it’s not for the youngest readers, or maybe for any reader younger than 12 or 13.  There are scenes that are frightening and/or violent, like in the first chapter, where a renowned professor passes out era pool of blood.  (He remains comatose for the entire book.)

This is an ambitious book, weaving hundreds of years of mystical Jewish teachings into an exciting modern-day story.  It reads quickly as long as you don’t let yourself get too hung up on the details.  But that might be just me.

There are enough parallels to the Harry Potter books to either delight or annoy fans, depending on how they feel about such things.

Parallels include a school for kids with special gifts (in this case, the North Temple Mount Academy and its highly secretive Chamber initiation program), the hero, Elisha, has a (non-lightning-bolt-shaped) scar on his arm from a childhood incident, a “sorting gate” that (spoiler alert) tells students which tribe of the Twelve Tribes of Israel that they belong to, a stalking brilliant / evil former student named Jonathan Marks (but referred to as “the other”), and a mystical presence lurking behind the walls of Jerusalem’s Old City.

Elisha Davidson and the Letters of Fire has a ton going for it, and I was really excited to receive the book it.  I love seeing new writers creating books that are unique, and it’s very safe to say that there are no other books like this out there.

The book itself is well-researched and intricately plotted.  The cover art is colourful and appealing, if not necessarily targeted to the right demographic.  It is clearly designed to appeal to the Harry Potter crowd, but any younger Harry Potter fan would probably be turned off by the slow pace and complexity of the book.  There are also many references to psychiatry, and I’m unconvinced that an actual psychiatrist would ever behave the way Dr. Brody does in this book.

I plowed through Elisha Davidson and the Letters of Fire in a single Shabbos.  The basic plot is solid, but I have to admit that it was tough at times to follow the action.  There were so many concepts flying through the air that at times I felt like I ought to have read the sources in the bibliography at the back before starting to read.  I found myself having to ignore or skim past certain mystical elements in order to get back to the actual plot.

If you’re looking for a straight adventure book for kids, this may not be the easiest sell.  It gets very intricate in places.  On the other hand, if your kids are mystically inclined or love obscure tidbits and details from Jewish tradition, they may absolutely love it.

My biggest question as I read this book was… what language are the characters speaking?

It often seemed like Elisha and his friends and “professors” weren’t exactly living in the real Israel.  (What Israeli school calls its teachers professor?)   And then, you’d think that such a school would probably operate in Hebrew, but several significant characters are olim from the U.S. and England, so it seems at once both strongly possible and improbable that their school – teaching arcane Jewish mystical traditions – is actually operating in English.

(At the risk of sounding like a hypocrite – yes, we are Jewish Israeli MacLeods… wanna make something of it? – it’s a little strange that the main character, from a respected rabbinic family, has the kinda-goyish last name “Davidson.”)

It’s hard to tell.  At one point, a random character is making pancakes for Elisha’s family, and he announces, “you’re lookin’ at the best field cook the army ever had.”  That dropped “g” may be a little thing, but it announces loud and clear that Aaron Kohen, a panhandler from the Kosel (Western Wall) is speaking English.

Elsewhere, one of the teachers, Mrs. Epstein, is depicted with an extremely irritating accent – speaking English.  At one point, she says “Zhis iz atrrocious!  Zhis iz exactly vhat happenz vhen you only know to uze computerz.”  I’d challenge anybody to say the words out loud and explain the difference between “iz” and “is,” “happenz” and “happens,” “uze” and “use” or “computerz” and “computers.”  Seeing the accent written out every single time is very grating and (as you’ll know if you tried the above exercise), doesn’t add anything, linguistically.

So this isn’t Israel as I know it, which isn’t really here or there… but then, for me, it kind of is.  It felt like the book wasn’t fully set in Israel, at least as I know it.

All of which aside, let me reiterate:  weird… and wonderful. 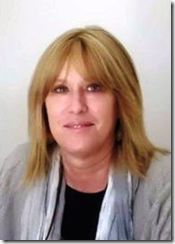 Just the fact that this book exists makes me want to cheer, for one thing.  I am so excited to see a religious woman and fellow olah creating a story that is about something more than wife-hood and mother-hood and the mundane day-to-day of Jewish life that I secretly want everybody to go out and buy this book.

That we “ladies” can dream in Technicolor, that we can weave mystical sources into a tale about an ordinary kid, bringing in further elements of science fiction, fantasy, secular society and the very best of young adult literature… well, it’s very, very exciting.  Attar has side-stepped all the clichés of Jewish womanhood and written her heart out.

I love that, and I think we should all support it.

(I cheered in the same way when Canadian literary grande dame Margaret Atwood turned around and created three books of rip-roaringly meaty dystopic science fiction, starting with Oryx and Crake.  I was a fan before that… but afterwards, I became a worshipper.)

Elisha Davidson and the Letters of Fire is well worth reading, and I’m confident that its sequels will be as well.  I remain tremendously impressed at how many elements have been brought together in this story and the richness and complexity it encompasses, even if the fusion of these elements is not entirely smooth and consistent throughout.

I do recommend you read it first before you hand it to your young adventure fan.  There’s nothing inappropriate here, but you may want to know what they’re reading since it is so different from everything else available to young readers in a Torah environment.  And then, of course, you can always ask them later on about the parts of the book you didn’t completely understand.

At least, that’s what I plan to do.