Sometimes, the stuff we buy is totally aspirational:  we buy it more for the people we wish to be, or to become, than for who we actually are.  Card games are like that for me, and I figure at least it’s not as bad as fashions (for some women) or shoes (for some women) or… well, almost any other indulgence. 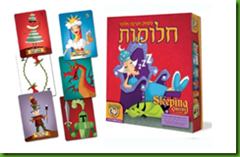 a sucker for fun new card games, I bought the game Sleeping Queens today while we were in Nahariya (note:  links point to the English Gamewright version; the Hebrew one is licensed by FoxMind), for ₪40-something instead of the ₪60-something in the big chain bookstores.  This is more than it costs online and in stores outside of Israel, but in this case, I really like the fact that the cards and characters are all marked in Hebrew.

We played this once already, as soon as we got it home.  Naomi said she didn’t want to play, that she had played it at school already.  I asked if she’d understood the rules, because a lot of what goes on at school goes over her head, and she kind of shrugged.  Still, I persisted, and I explained everything carefully in English and we both had a good time.  There’s a little math involved, but not so much that it’s heavy.  And there’s a little silliness involved, but not so much that the game is babyish. 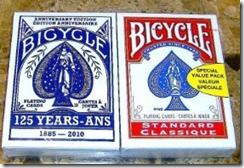 I even think Sleeping Queens is a game GZ could get into if he ever gets over his “twosies fish” obsession.  Huh?  Never heard of “Twosies Fish”?  Well, here’s my basic taxonomy of the boringly basic “Fish” card game.

You wouldn’t believe the amount of fun a 6-year-old can have with a basic deck of playing cards.  Seriously.  Certainly, I don’t.  But I try to bear with it because after years of my inviting him to play card games he’s finally, finally (sometimes!) saying yes, and playing eagerly when he does join in.  (He chortles to himself as he lines up his pairs, and often creates a literal line of them across the floor, to the point where he has to get up and run across the room to place a new pair at the end of the line.

But in general, I’m not joking when I say I’m a sucker for card games.  I’ve bought three recently.  They don’t take up much space, don’t cost a million bucks (well, in the big-chain bookstores here, they are kind of pricey), and they give you something fun to do on Shabbos afternoon.  If I could ever peel myself off the sofa… mainly, I’m too exhausted to play, which is where the aspirational aspect comes in.  Also Friday night; just too darn wiped out.  :-( 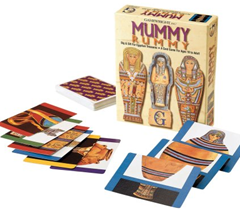 One of the other new games came from eBay, the card game Mummy Rummy, which is kind of cool, if  complicated to get started.  I played it once with Naomi Rivka, and I suspect that it gets easier and more fun once you become very familiar with the cards.

But the other game, Flips and Flops,

was a total disappointment.  I’m not even linking to it here.  It’s another FoxMind game, so I was expecting a play experience similar to the GameWright type games that FoxMind licenses here.

But alas, this game seems rather poorly thought-out, and we couldn’t figure out a way of playing that didn’t end the game in a very unsatisfying 3 minutes or so.  I emailed the company, but they don’t seem to give a hoot and never got back to me, so there it sits on the shelf, despite GZ’s initial excitement over the box graphics (with a mean crocodile and some escaping frogs, not to mention a “medal” you win at the end of the game, it looks like the sort of thing he’d totally love).

It seems like this isn’t a GameWright game, either, but one FoxMind kind of thought up (or failed to think up) on their own. What a lousy experience, especially considering the ₪60-some-odd shekels I spent for it in a store here.  Big frown!

Besides these, there are a few other staples on our card-game shelf, just begging me to wake up and play them with a kid…

Before I leave off this post about card game winners and losers, I absolutely must mention one winner I think I’ll never regret… and that’s this set of blue plastic playing card holders.  I don’t even

remember how long ago I bought them – ages and ages ago.  (Oooh, just checked this old blog post, and apparently, I ordered them in 2009.  So not all THAT long ago.)

There are all kinds of playing card holders out there – some designed especially for kids (here’s one by Gamewright themselves!), others for adults with arthritis and other disabilities…. but I don’t recommend any of them except these.

The card holders we have are made by a company called Jobar, which seems to make therapeutic products and lifestyle aids in general.  The day I bought them, my son noted that a friend of his had these at home for a sibling with a disability.  They are very sturdy plastic, though they will tip over backwards if pushed – they’re not bulletproof, but have made it unbelievably easier to sit comfortably with the kids and play card games.  Indeed, they are often the difference between frustration / tears and happiness / fun… and sometimes, if only one kid is playing, I’ll take the other card holder, just because it’s an easy way to keep my cards secret and organized.

It occurs to me now that, however aspirational my card game lust may be, most of these games have had quite a bit of playing time, and certainly, the card holders have seen a lot, a LOT of use in their four years with our family.  So it may not just be a dream of who I want to be… playing cards may actually be something our family enjoys, and will enjoy more as the younger kids get older.

Are there any really, REALLY great games we’re missing?  What do we need to add to our bookshelf?  Inspire me with your family favourites – I’d love to hear about them!!!