What?!  Adding curricula?  Am I nuts?

Well, first things first.  Naomi finished the Explode the Code series a month or so ago and I wanted to move her into a series of phonetically rule-based spelling books.  Except I couldn’t find any that were no-nonsense, quick and easy, with lots of independent work (like Explode the Code) and no teacher preparation.

We tried Spelling Workout last year and both hated it, and I have since looked over any number of spelling books before finally discovering the one I wanted:  Rod and Staff.  Those of you in the know will have already gasped and fainted, so for the rest of you, Rod and Staff is a Mennonite publisher of Christian curriculum materials in a wide range of subjects.  They’re not just a little Christian, they are a LOT Christian.

Still, I was so excited by the samples I saw that I decided to order the books and “work around” any issues in the texts… and there ARE many.  Um, well, first let me say what I liked, and then I’ll show you some of the issues and how I plan to work around them.

As a spelling program, these books are excellent.  I hate to use a hackneyed phrase like “hackneyed phrase”… oh, I mean, like “back to basics,” but they are.  A totally no-frills approach, and I was thrilled to flip through them when they arrived.  Which, of course, I had to do, because of phrases like this:  “6. What place did God prepare for Satan?” (um, is it “puppy”?) 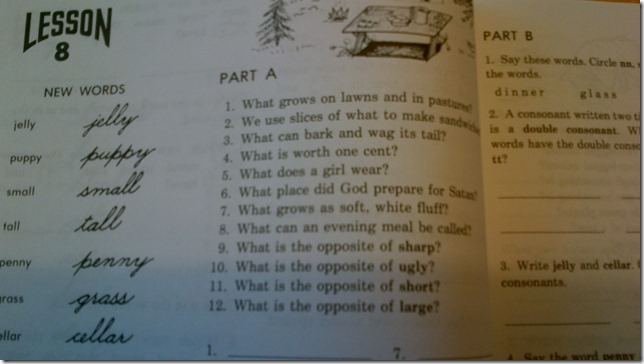 There are also a few things that make me smile.  Like in last week’s lesson, which featured the word “Word.”  Capitalized.  Nothing offensive – they just mean the Bible is the “Word” of God, which is a sentiment I suppose I can get behind.  In fact, most of its Bible-iness is “Old-Testamentish” and inoffensive, like “Moses used oil to anoint Aaron.”  (in the spelling test teacher’s example above)

But some isn’t, like the capitalization of the word “Son” in the example below.  Not sure if I’m going to go over the pages with White-Out exactly, or just cross out the examples and write in some of my own. 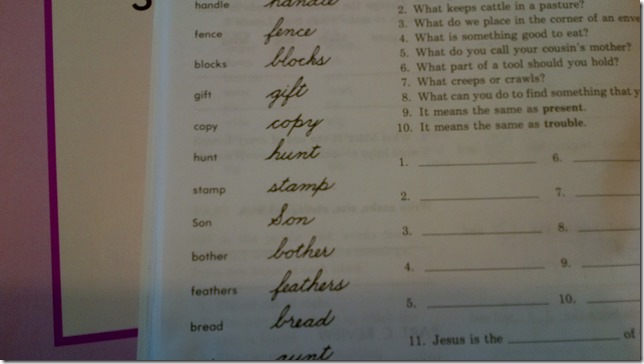 Some of the examples are just generally churchy and goyish-sounding, like “Mother ____ me my Bible” and “We have ____ to church on time.” 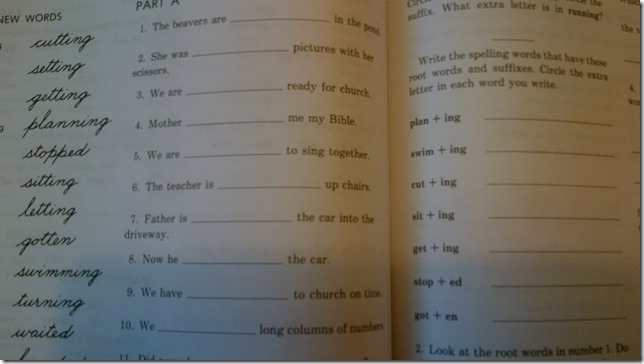 Still and all… I am very pleased with this program, although since we’ve just begun and I’m taking things one week at a time, I certainly cannot vouch for or recommend this series as one Jewish homeschoolers should take on without a great deal of caution.

Hmm… maybe someone needs to write a Jewish one?  Now, there’s a thought!

(People did recommend a couple of spelling programs that were “the secular Rod & Staff,” like Soaring with Spelling, but none of them really were as complete, compact and free from distractions as Rod & Staff.  So we’ll see how and it goes and maybe update you if it works for us… or doesn’t.)

Now!  Since I said up top there were TWO new curricula… you may be wondering what the second is, and I’ll tell you:  French.

I have been feeling sad for a while about leaving behind Canada’s second official language, a language I love and actually think I’m pretty good at (not fluent, you understand, but my French is way better than my Hebrew), and living in Canada, I have always enjoyed just having it in the background, if you know what I mean.

So I looked around and posted online and after briefly toying with the idea of getting the Alex et Zoe program that my big kids used in elementary school, which seems to cost over $100 a year, all-told, I went with a speaking / listening / comprehension-only program (ie no written work!) called L’art de dire, from a local company called Nallenart.  The program is pretty well spoken of in the homeschool world, it’s less expensive than some other programs, and likely (I haven’t listened carefully) teaches Canadian, as opposed to Parisian, French (sort of like learning British vs North American English).

Before I went to order it (from what the site describes as “Our very cool Nallenart Curriculum Shop” (but which failed to deliver any essential coolness), I noticed a couple of sites that said the company’s customer service was lousy, that shipping was slow, and that if you’re interested in this program, you should probably buy the instant-download PDF version.  Except that, now that my printer is so stupid, I hate using PDF versions that you have to print at home.  Maybe I’m just getting cranky in my old age:  if I order a book and pay for a book, that’s what I want… a book.

I did the next-best thing – I ordered via PayPal, having had one or two good experiences of getting my money back in cases where people didn’t ship what they said they would.  And it’s a good thing I did, as it turns out.  When I say that it’s a “company” publishing this book, I say that in the same sense that I am a company publishing my book (I am!  click here to buy one!).  It’s a one-woman operation, which wouldn’t be a problem if she would ship the books when you order them.  But she didn’t.

I admit, I wasn’t very patient.  Having read poor reviews, I was nervous, and a couple of weeks after I ordered a product that was supposed to come with “next-day” shipping, I emailed.  I phone the number on the website.  I emailed again.  I posted on facebook.  And then, a week later, I filed a PayPal claim (you only have something like 45 days to file it).

Two days later, I got an email from her saying the book would be here the next day… and it was.  Though I never did get a reply to my follow-up email (“Was there a particular reason you ignored my multiple attempts at contact?”).

Anyway, the book and CD are here, and they’re put away for the time being, but I’m actually kind of excited about using this program… it looks good.  The book has a few sections:  lesson plans, picture flashcards (you’re supposed to copy them onto cardstock, I guess), story dialogue and story pictures.  (I guess you hold them up while listening to the story on the CD?)  The art in the book is rudimentary and homemade-looking, and in some cases, kind of bad (especially for a company with the word “art” in its name), but it will get the job done.

Here are a few lesson plans, shown at random.  (all images from L’art de dire, by Nallenart (Norma Allen), used for review purposes)

Story, pictures and dialogue (I think this is what it is):

Oh, yeah… and the postmark indicating that it was mailed to me on June 10th, nearly 3 weeks after I ordered it (and paid $13 for next-day shipping!), on May 21st.

All in all, the program looks good – and I love that there’s no writing involved, so both kids can do it together! – but I wish that this company (ie person) was a little more interested in building goodwill among her clientele in the homeschool world.

In fact, having listened to snippets of the CD and flipped through the book a bit, I think the program looks very impressively comprehensive, covering a whole bunch of things from greetings to colours to telling time and more.  Nevertheless, while I might be prepared to recommend the product itself, I can only do so with the caveat that you’d better be prepared to fight to receive what you’ve paid for (or be prepared to download and print stuff on your own at home).