Did you know? Jewish Student’s Book of the Centuries for History study

Nearly 3 years ago, with great trepidation, I released my first printable that wasn’t free:  a Book of Centuries.  More heavily influenced by Charlotte Mason then than I am now, I wanted my kids to do this instead of a timeline because a) our house is tiny, b) our walls are cluttered, and c) I knew it would take us a looooong time to work on.

Have you ever seen what happens to a piece of paper after it’s been clinging to the walls for a matter of years???  In my house, at least, it would be in illegible tatters.

So I made this book, at great effort, because I’m not by nature a history person and it was fiddly and frustrating to create.  And when it was done, I printed it up on strong smooth white paper at Staples, and it’s still around, all these years later.  I don’t think – and I say this with the kind of great pride that often goes before a fall – that there isn’t a single mistake in the page headings, the year numbering or in any other significant area.

Oh, yeah, did I mention that you can own it – as an instant download – for less than $5?  (Click here to find my stuff on CurrClick.)

Here are how I made the time periods correspond, by the way, in case you’re curious: 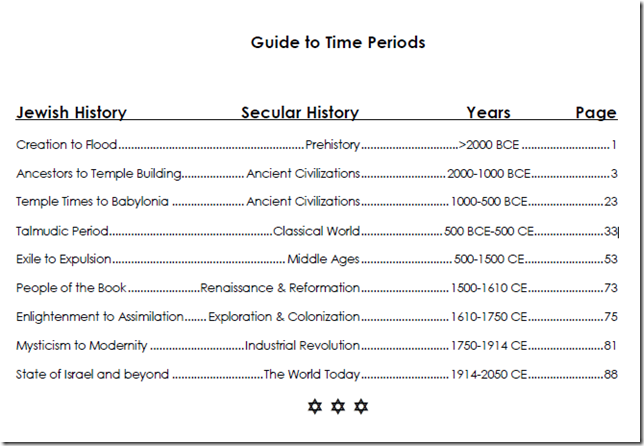 These headings appear at the top of every single page, with slightly less space for ancient centuries than for modern ones.  And because it’s loose-leaf, you can always add pages if your kids get so enthusiastic that they fill up the pages entirely.

Here are a couple of sample pages:

(you can see actual page views over at this post)

Unlike a timeline, a Book of Centuries isn’t necessarily on display every day.  That’s both good and bad.  Kids may not be as familiar with it and you may forget to pull it out – I know, we forget to paste a new historical person / event into it ALL the time.  But the good side is that because it’s not out all the time, pulling it out is kind of special, and Naomi Rivka loves to flip around in the book, seeing time periods we haven’t studied, which are mostly still white, and then flipping to the modern sections, which are crammed full of entries.

I create new “stickers” in a Word document every time it occurs to me:  after we’ve studied somebody or something new.  Then, I print them out when I figure we have enough and we have spare time to paste them all in.  But I made my life a little easier, too:  for $8, I bought the Pandia Press history Sticker Packet from Rainbow Resource, which includes images of many famous figures from every time period.

So now we intersperse these with my own homemade stickers (print-outs, with glue stick):

Here are four totally different “stickers” – one drawn by Naomi Rivka, one from the Pandia Press packet, and two I created, one based on an illustration I found and one based on a Magic Tree House book we read (for a while, I was sticking them all into the book).

If you look at the cover of the binder, above, you’ll see that it’s had some love and wear and tear, but it’s still in great condition and going strong.  I wish I could sell these as hard copies, binder and everything, but I can’t.  I do, however, urge you to spend a little extra to print it on the best quality paper you have available and stick it in a nice binder that will last and last.

Studying history with my kids has been an amazing eye-opener for me; there’s so much I don’t know.  This Book of Centuries has probably been just as much for me as it is for the kids, helping me see the scope of history and keep things straight in my own mind.

And if you learn history with Jewish kids, I believe now even more than when I created this, that we have to counter the sweeping tide of secular materials with beautiful books and resources that incorporate our own values and our own people right at their very core.  For less than the price of a latté, I believe this Book of Centuries can help you do that.  Here’s the link to buy this and other printables on CurrClick.

(as always, if you can’t afford my CurrClick materials, please let me know and we can work out a lower price via PayPal)