Seen these? Frum toys, a rant

These just popped up in an ad on a frum site:  Binyan Blocks.

(I like how they coyly say it’s “compatible with other leading brands.”  That means Lego.)

It’s a cute idea, except that in a $65 set of 778 pieces, maybe about 30 of the pieces are special frum ones – ie the heads, hats and upper bodies of the minifigs (mentschies).

I do like the fact that – in addition to the Large Shul - there’s an ambulance (Shomrim) and firetruck set.  I love the idea that kids can grow up with the idea of Jews with hats and beards – Jews who look just like their dads! – as action heroes.  It beats the pants of drawing kippahs on the regular Fisher-Price mentschies, which is what I used to do years ago.

These seem to go hand-in-hand with another “picturing Jewish life” toy I’ve seen in stores here for a few years now:  the Mitzvah Kinder.  They’re more meant to go up against the Fisher-Price type dolls for younger children, I suppose, and again, I applaud the manufacturers’ idea to introduce a few of these who actually do manual labour, not just learning and going to shul.  Not that there’s anything wrong with those things, of course.

In general, I like the idea of dolls that mirror kids’ own lives, as long as they are not used to the exclusion of every other type of doll.  One of Naomi’s favourite dolls was a beautiful, vanilla-scented Corolle baby doll that was Asian and very, very sweet.  She also went through a long period of believing darker skinned dolls were more beautiful (and perhaps more exotic than our own Euro-Ashkenaz pasty pinkness).

Nevertheless, if dolls like these are used to shut out experiences of diversity, I think they could be a problem.  For example, here’s the Binyan Block makers’ idea of diversity in the Jewish world:

Male, white, brunet - chassidish, yeshivish, heimish (not sure what these distinctions mean and neither is anybody else, but they figure prominently in the makers’ description of themselves).  Beard narrow, wider, full or too young to have a beard. 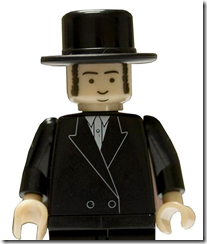 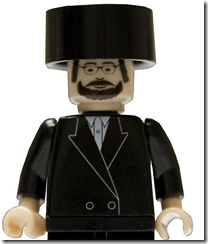 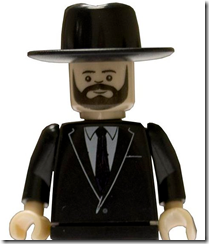 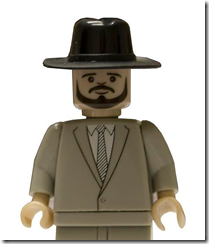 Oh, yeah… and girls/women, white – brunette and more brunette.  Actually, apart from the lapels, these look pretty much like any other minifig women… I mean, the hair always manages to look like a bad sheitel, right? 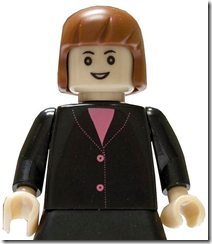 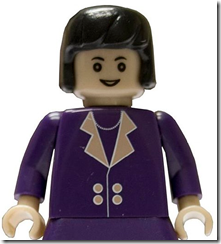 In general, the Mitzvah Kinder do better for diversity.  All ages are represented (not just “adult” and “old enough for a hat but too young for a beard”), every family includes mommies and girls, there are different hair colours, and many of the dolls are older people as well.  That said, there’s still a Litvish / Chassidish split, where families can choose the dolls that look like them (just as, increasingly in Jewish books, there are different versions released so kids ONLY have to see pictures of people who look like themselves).

(This is the “Mazel Tov” set, in 2 versions:  the one on the left is Litvish; the right is Chassidish)

A world of difference, right?  Practically a whole rainbow!

This “Totty Mentchees” (ie “father dolls”) set is cute: it encapsulates all five types of fathers:

(funny, none of these look much like MY father, or my kids’ father…)

Another potential problem with frum Jews developing and marketing their toys is the general trend toward illiteracy, real or feigned, in common, everyday English.  Here’s an example from a different toy, where kids can dress and undress little dolls.  The slogan on the box is, “Kids will Pop & Play, a whole day!!”

Then, we can find other harmful messages (yes, “we don’t need to speak good English” IS a harmful message!) served up even on the packaging of these products:

(a little more on this from frumsatire.net)

Reminds me a bit of a page I created for our homemade siddur and then, thinking it might be useful to others, submitted to chinuch.org.  They normally post my materials as-is, but in this case, they made two small changes.  The one on the left is the page I made… the one on the right is the one they actually posted on their site, under my name.  Can you spot the changes??? 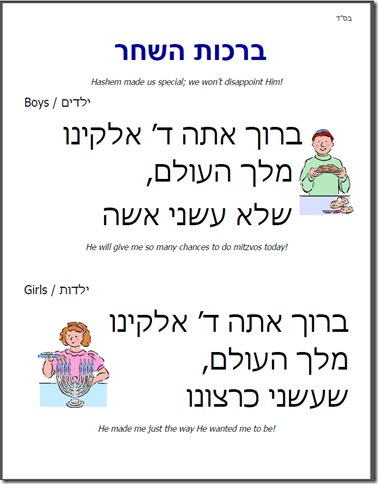 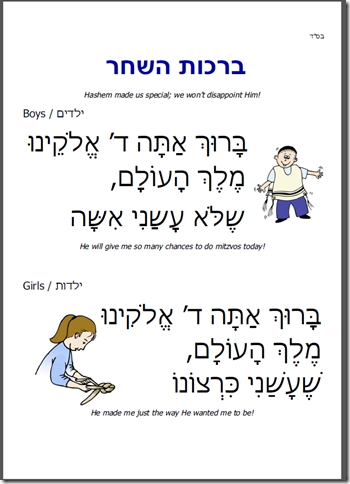 Yup, you got it.  On the left, I purposely chose children who were actively involved in mitzvos in a slightly non-traditional way (just call me a troublemaker!).  The boy is helping around the house, cooking and/or serving food, thus, presumably honouring his mother.  The girl is lighting a menorah, in which she is indisputably obligated (though perhaps exempted if her father lights, and okay, yes, she is wearing short sleeves, which may be another reason she was edited out).  The substituted images, on the right, are VERY traditional: the boy is wearing tzitzis, while the girl braids challah.  Way to go for busting through those gender roles, frum world!

(Oh, yeah… plus, the ones I chose are also competently drawn and chosen from a professional clip-art collection; the ones they substituted are weird and a bit “off” in that way that frum art so often is.  As if talent at drawing, like talent in the English language, is also a skill to be denigrated in favour of a Torah-true approximation.)

Wow – sorry, a bit of a digression.  I guess what I’m trying to say is that the toys we give our kids, like the learning materials we hand them, tells them a lot about themselves and their place in the world.  Will we challenge them, by giving them a mixture of toys and materials that lead them to ask questions about how to accomplish their purpose, or will we just hold up a mirror to what they already know about us and our lives as ovdei Hashem (servants of Hashem)?

Which is still a lot to think about when you also might be reading this and thinking, “Cut it out; you’re over-analyzing.  It’s just a toy.”  Is it?

So what’s your favourite Jewish toy???  And what messages is it giving your kids?