Is now the time to talk? In light of the school shooting on Friday in Connecticut, a mother has released a heartfelt article saying, “I am sharing this story because I am Adam Lanza's [Friday’s shooter’s] mother. I am Dylan Klebold's and Eric Harris's mother. I am Jason Holmes's mother. I am Jared Loughner's mother. I am Seung-Hui Cho's mother. And these boys—and their mothers—need help. In the wake of another horrific national tragedy, it's easy to talk about guns. But it's time to talk about mental illness.”
So let’s talk.
Let’s talk about my family’s Chanukah party, which often sucks anyway, because our father continues to be dead (yes, we’re grown-ups, and yes, it’s been four years, but still).  What semblance of a party there was last week, thanks to my mother’s very hard work, was totally shattered by the wandering-in and shouting and carrying-on of my possibly drunk but definitely crazy, smelly, bedraggled little brother.
He’s never been violent, but boy… last week was the closest.  He came here a few times, and it was the first time, after 18 years of mental illness, that I thought he might actually hurt somebody.  Ted had to ask him to leave, and in the end, he did.  Same thing at the party; my mother eventually shut and locked the door.  He came back in a couple of times, quietly at first but getting louder each time until eventually he left for good.
I will emphasize:  he didn’t hurt anybody.  I don’t think he ever would.   Sometimes, his gentleness amazes me, because I don’t know what demons he’s wrestling with.  I hate to throw a cliché like that in there – demons (shudder) – but there it is.  I don’t know what he’s struggling with, but sometimes it doesn’t seem like he’s struggling hard enough.  He’s sure as heck not winning and neither was our party.
Which is not the same as shooting school kids.  This morning, he called while I was in the other room and told Naomi, “don’t tell your mother I called.”  She DID tell me, and I assured her that she shouldn’t have secrets from parents “unless it’s something little and happy, like a birthday present.”  But even telling her that – it’s more naughtiness than anything else.
So my brother doesn’t hurt anybody… unless you count the family members who have no idea how to keep him safe, and how to protect the rest of us from his shouting, irrational, scary behaviour.
The mother who wrote the article, Liza Long, doesn’t want her son put in jail for his violent, antisocial behaviour.  “No one wants to send a 13-year-old genius who loves Harry Potter and his snuggle animal collection to jail.”  But there are no other options left.
In the paternalistic atmosphere of former times, people were often institutionalized for years – for life.  Trouble was, sometimes they were actually sane.  Sometimes, they had treatable problems.  And these days, the thinking goes, we have amazing medical solutions that can fix almost everything; even better!  Fix em up, out the door, save a fortune!
So the institutions have gone the way of the tuberculosis sanatorium and instead we look for ways to integrate such people into our community – supportive housing, shelters, and… well, the fine arrangement my brother has settled on since the summer:  living under a bridge.  Except the underside of bridges can get a little cold here in Canada ‘round about December time. 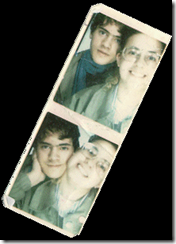 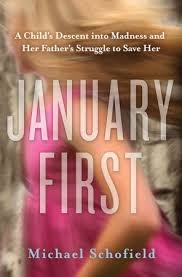 I read a book recently called January First that I would recommend if you want to know about mental illness – the real, scary extremes.  Rarely do I find a book as upsetting as this one was, even though this was NOT my experience of my parents’.  More typical is a diagnosis in the early or mid-20s, which is when my brother was diagnosed.  The girl in this book, January (but her parents call her Jani), was diagnosed very young; I think maybe three or four.  And she’s dangerous; not just ordinary little-kid dangerous, but so dangerous that her parents have to get separate apartments so she won’t kill her little brother.  (read an excerpt here to decide if you’re interested and up to reading the full story)
The most disturbing thing about this book, for me, is the very incompleteness of the story.  As he wrote it, his daughter was still a child, as she still is today.  There is no happy ending; there is no ending at all.  As with any of our stories – as with ALL of our stories, the ending has yet to be written.  It’s a metaphor and yet it is also so very true.
I read a blog post a while ago by a woman in Israel (found it!  Click here to read) who had somewhat befriended a homeless non-Jewish man who lived nearby.  When he was in good shape, he could do odd jobs around her home and she’d give him food.  When he wasn’t, I guess he’d just go away for a while, lose touch, and then, eventually come back.  Except eventually, he died, and she blogged about him and how he’d touched her life, and I thought, “that is not the worst thing in the world.”
To be a gentle homeless person with a few connections to the world, to have a few people who care about you, to eventually die of something – I don’t know what exactly (dwelling on it ruins the fond haziness of imagining); well, it’s not the worst ending.
Ultimately, unlike many illnesses, the ending is not in our hands or the doctors’… it’s in his own incompetent, filthy palms.  We’ve already had a sneak preview of some of the grand possibilities in the Choose-Your-Own-Adventure that is Life with Severe Mental Illness:  disfiguring, potentially-fatal bike accident – check!  criminal activity – check!  drugs (maybe not) but slow suicide by alcohol – check!  talking to messed-up strangers in ways they might interpret as picking a fight – check!
Most of the choices are equally bad, and I’m never getting my brother back.  I think I’ve talked enough for now.  Maybe it’s someone else’s turn.