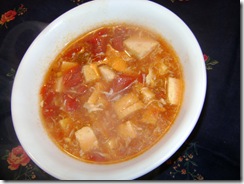 “It’s my own invention!”

Here’s a quick easy medium-hearty soup to go along with a rice-based stir-fry – especially good for a cold evening when there wasn’t much in the house beyond rice and tinned tomatoes… I improvised this, writing down what I did along the way so you could enjoy it, too (cuz I knew ahead of time that it was destined to be just as fabulous as it turned out to be!).

To finish the soup, you’ll need:

Re:  the egg dropping part – if you want perfect, soft, silky strands instead of rubber blobs in your soup, it can be tricky, so read up before you begin.  Here's a guide to how to do it right.  If you really, REALLY care; sometimes, I don’t.

How to make it: