Crochet Projects on the go

I don’t want to inundate this blog with crochet projects… but on the other hand, I really do feel that crocheting complements our homeschooling, because it makes me less fidgety and better able to sit with the children and IGNORE them while they’re doing their work.  It sure beats moving across the room to use the computer, which – as any classroom teacher can tell you – is a recipe for inattentive kids (“heck, if the teacher’s not paying attention, why should we?”).

So while they work, I sit and crochet.  Today, while Naomi and I were doing school during GZ’s preschool class at a local recreation centre, I made these miniature turtles… here they are, frolicking in their bed of yarn. 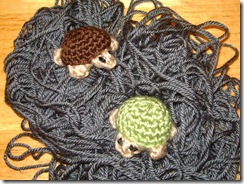 They took about 45 minutes each – would have been far less if I wasn’t actually helping Naomi with her work.

Then, later on this evening, a few “finishing up” type projects I’ve been putting off…

This hat was completely finished over the summer (June?) – and then I ran out of yarn just before I started the ribbed edging… and the yarn store was all out of the colour I needed.  Natch, I ordered it on eBay, and it arrived promptly, but by the time it got here, I’d started a million other projects and, well… here it is, November. 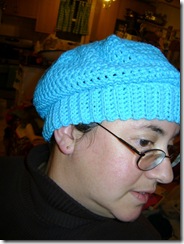 I wanted something at the edge, and finally threw this little flower on.  Yes, it really is as asymmetrical as all that.  But then, it’s a gaudy pink variegated Pepto-Bismol flower… I think I like it simply because it’s like nothing I would ever actually wear, and yet now that I’ve made it – I might. 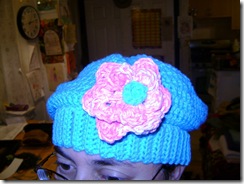 The colours look all wrong for November, but I’ve been told that warm weather will come again… eventually.

This weird teal cat hat was a special request for a friend of Elisheva’s: 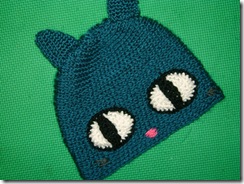 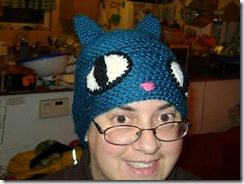 I think she has a much bigger head than me, so I’m hoping it’ll look less goofy on her.  Elisheva seems pleased, in any event.  I’m kind of impressed with the texture of the hat itself – ignoring any cat-related thingamies I’ve sewn on.  It has a distinctively stretchy, non-crochet kind of feel to it.  Quick and easy to make, also.  Strange how so many crochet projects bill themselves as “not looking like crochet.”  Kind of like kosher food that advertises itself as “not tasting kosher.”

This was last week’s project… 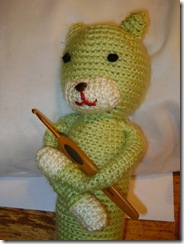 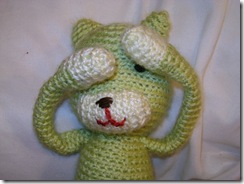 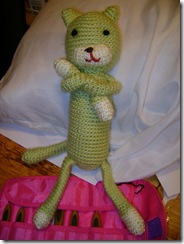 It’s a baby present for a friend in Israel.  I am very pleased with the facial expression; these are my best eyes ever, I think.  I found a good tutorial for doing baby-safe eyes with yarn knots – I’ve been using yarn knots all along, but these are the biggest and most expressive-looking so far, I think.

Two chunky bunnies I don’t like very much at all… I don’t know what I was thinking when I did the brown one and she brings down the blue one, which is actually kind of cute without her.  She turned out wider, and brown is totally the wrong colour for this project.  Plus, I was itching to use those doll eyes, which I bought months ago, but honestly, they’re too big for this project.  Yarn eyes would have been better here, for sure, or ordering the right sized ones on etsy. 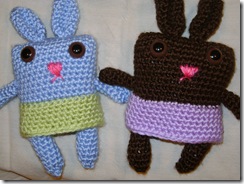 Finally, I made these matching big-and-little lattice-pattern hats which I actually like very much.  The little one was sort of an accident; the pattern came out WAY too small, so I gave the hat to Naomi Rivka and made another one that I ended up giving to Elisheva… except when I find it lying around and wear it myself.  This grey is very nice; in certain lights, it looks almost blue. 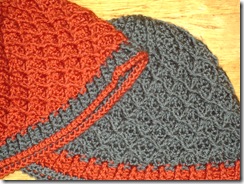 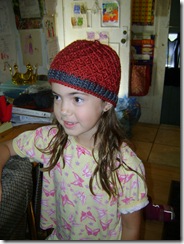 Anyway, there you are.  One post, so you won’t be inundated with many many as I go along.  If you crochet and are at all interested in more pictures and/or links to patterns, please check out my Ravelry scene.

What have you been working on these days???