I was previewing this (reasonably good, and free!) second-grade Chumash workbook on chinuch.org and I was puttering along through a preview of the book when I came upon this page: 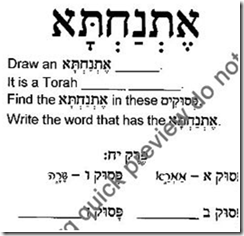 And I was like, “what the heck is an esnachta?”  Let alone drawing one.  Let alone finding one.

Now, don’t laugh if you have known this since birth – this must happen to baalei teshuvah all the time.  Because it turns out I do know what an esnachta (etnachta, to some) is… the thingamabob I have always thought of as the “spur,” the rodeo-inspired doohickey I gradually worked out for myself over a period of not days or weeks but YEARS.

If you don’t know what I’m talking about, you will – you’ve seen them all over the place in the Chumash.  It’s the little red thing underneath this word:

That’s an Esnachta.  The word, and the doohickey.

All on my own, I learned that besides being trop (Torah cantillation marks), which I usually ignore, it was ALSO crucial grammatical Torah punctuation which – natcherly – they never bothered telling us about in Hebrew school.  Crucial because it helps divide sentences that otherwise run on and fail to make sense.  So of course they’d want to introduce it near the beginning of a student’s Torah education.  By the way, I was wrong; I’ve come to understand that trop is entirely logical and grammatical – in Hebrew, it’s called ta’amei hamikra / טעמי המקרא – the “flavours” of the reading, with their musical attributes being completely inseparable from their grammatical connotation.

In the same way that I wouldn’t try to read The Lion, The Witch and the Wardrobe without commas, periods, parentheses, etc. (“hadnt we all better to go bed said lucy there’s sure to be a row if were heard talking here”), you shouldn’t read through the Torah without at least glancing at the trop.

And just like commas do, each of the little punctuation thingies have their own name.  I  just never, ever thought about it before.  So now I am having a crazy BT moment of clarity.  I knew about it, but never knew it had a name and would never have emphasized my ignorant non-FFB’ness by actually asking anyone.  Ever ever ever.

But now I know, and apparently, in the FFB world, this is required knowledge to get past Grade 2.  Figures.

Post-script:  Just asked one of the Big Kids who happened to be wandering through and this particular big kid said, “What?  Oh, the wishbone-thingy!”  So now I don’t feel too bad.  I mean, except for the $1000s wasted on his/her Jewish education.