This is a basic overview of the parsha story in a format that can be adapted for a wide range of ages. Sources include parsha text, commentaries and midrash.  When introducing midrash or other non-pshat elements, I  use the words “some people think” or something similar (find out why).  If you find these overviews helpful, or if there’s a typo, or something is confusing you or your kids, I’d love to hear from you.  Pretty please, with sugar on top?

Images this week (taken from here) are by Sweet Publishing,freely shared under the terms of the Creative Commons Attribution-Share Alike 3.0 Unported license.

Bereishis means in the beginning… but because we never start OR finish learning Torah, we just carry on what we’ve been learning so far. It’s a brand-new story, about a brand-new world, but it’s important to remember where the story leads – to Har Sinai, to the Torah, and then to eretz Yisrael. But all of that is hundreds of years away now as we rewind the sifrei Torah all the way back to the beginning… and in the very beginning, Hashem made everything.

But the way Hashem made everything is interesting.

How do YOU make things? First, you need to gather all the stuff you’ll need! Then, you do whatever it takes: hammer nails into wood, or stitch a needle into fabric, or stir eggs into sugar. You can’t just sit back and THINK about a bookshelf, an apron or a cake! And you certainly can’t just say “bookshelf,” “apron” or “cake”… not if you want a place to put your books, or dessert for Shabbos (or a clean shirt while it’s baking).

Hashem is very different! Hashem is not like a person – at ALL.

Sometimes, we say “Hashem’s hand” or “Hashem’s face,” but Hashem has no body. Hashem isn’t a man or a woman. In English, we say “He,” but that’s only because there’s no good way to discuss someone who isn’t a person. And it’s the same when we say Hashem “made” something. Hashem doesn’t need supplies, or ingredients, or tools – Hashem made the world just by speaking. (Without a mouth? It is VERY difficult for us to imagine what Hashem is like – people called theologians have spent many thousands of years trying to describe Him, and they’re still not very good at it.) 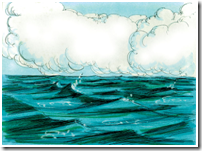 So Hashem spoke, and there was the world. It took seven days and ten “utterances” – ten speakings:

“Let us make man in our image” – human beings are a little like Hashem!

“Be fruitful and multiply” – The first mitzvah! Have many children to care for His earth.

“I have given you every herb…and every tree” – He will provide food and take good care of us.

Hashem might not have made anything on Shabbos, but He showed us how must live on His earth – resting every week. He created people “in His image,” and to be like Him, we have to stop working and take time for holy, special days.

There is so much more in this week’s parsha than we can talk about here!

The story of Adam and Chava, the first people, could fill a book! They made huge mistakes, almost right away. Hashem let them have any fruit in Gan Eden except from the Eitz HaDa’as (Tree of Knowledge). So which one did they eat? That one, of course. Adam said Chava made him eat it; Chava said the snake made her eat it. The snake was punished, and so were Adam and Chava – cast out of the perfect garden Hashem created for them, into the world of pain and hunger.

Life was very, very hard, right from the very beginning…

When Adam and Chava had children, one of them became the first murderer! Kayin was a farmer, and when he brought any old crops for a korban, Hashem preferred the delicious fat lambs his brother Haveil brought. So Kayin killed Haveil and ran off with a mark on his forehead. Adam and Chava had another son, Sheis, and through him, everyone else was born (some people believe Kayin and Haveil were born with twin sisters, which would explain who he married!).

There are also lots and lots and LOTS of names in this week’s parsha!

The Torah lists the names of fathers and their sons, all ten generations after Adam. It also says how old they were when they died. Those ages are pretty strange – Adam lived 930 years. The longest life was Mesushelach, who was 969. There’s still an expression, “As old as Methuselah” (that’s his English name!). But they all died, right? Maybe not… Chanoch, the father of Mesushelach, lived 365 years, but he’s the only one about whom the lists don’t say “he died.”

Instead, it says “Chanoch walked with G-d” (elokim).

What does this mean? Some people think he really never died – he was one of nine tzaddikim who went to shomayim alive. What a tremendous zechus (honour)! But the most important person comes right at the very end, after ten generations of people getting into bigger and bigger trouble. Then, along comes one good man, the grandson of old, old Mesushelach. His name was Noach.

… and we’ll read more about him in next week’s parsha – Parshas Noach!