Please see the Vayeishev overview for how we use these narratives  in our homeschool.  There are also brand-new copywork sheets for this week’s parsha… enjoy!

Actually, there’s only one birthday mentioned in the entire Torah, and that’s way back in sefer Bereishis, in parshas Vayeishev (its name sounds sort of like this week’s!), where Paroh is celebrating. On that day (do you remember all the way back to last year?), he frees his butler (wine steward, שַׂר הַמַּשְׁקִים/sar ha-mashkim) and has the baker (שַׂר הָאֹפִים/sar ha-ofim) hanged. Paroh wasn’t Jewish, but from the way he was deciding who should live and who should die, we can figure out that birthdays were a time to make important decisions about many things.

Do you know how old Moshe was?

Older than anybody you know, that’s for sure. As I’m writing this, the oldest person in the world is 116. Now, Moshe gathers everybody up and announces: “I am 120 years old and I’m not allowed to travel with you anymore!” 120! Even though he’s very, very old, he is still strong, and he keeps on teaching even though this is the very last day of his life. (By the way, since we started keeping track in modern times, the oldest person was 122, a woman who died in 1997.)

So how come we don’t celebrate Moshe’s birthday every year???

The Torah doesn’t tell us exactly when it was. Many people believe his birthday was on “zayin” Adar. Zayin is the seventh letter, so this means the seventh day of the month of Adar (the same month as Purim, usually). This date actually is remembered with a fast day and a yom tov for people who do Jewish funerals, the chevra kadisha. That’s because Moshe was alone when he died, so nobody could bury him, and Hashem did this important job for him.

Now, Moshe reminds bnei Yisrael that he can’t cross the river Yardein with them.

“But don’t worry,” he tells them. “Remember everything He did to defeat our enemies in the midbar? He’ll travel in front of you, along with Yehoshua. You will be safe, and destroy everyone in the way. Chazak ve’ematz (חֲזַק וֶאֱמָץ) – be strong and courageous!” Moshe says over and over, to the people and to Yehoshua.

It isn’t enough to be strong. You need a special kind of courage!

Remember the story of Chanukah, when thousands of Greek soldiers, with armour, and weapons, and elephants, were defeated by just a few puny Maccabees? Those Greeks were strong – but the Jews were courageous. They knew with Hashem on their side, they couldn’t lose.

He wrote out the entire Torah and gave it to the Kohanim. “Don’t just stick it in the Aron,” he told them. “Don’t let it get dusty! Take it out and read it! Every seven years, gather every man, woman and child for hakhel, and read this entire book. It will give you the strength and courage you will need in your new land!”

Now, Moshe and Yehoshua go off privately to the Mishkan.

“Listen,” says Hashem. “They’re not going to remember. They’re going to do avodah zarah. They’re going to forget about Me, and about My mitzvos. All the curses are going to happen, and they’re going to blame Me. They’re going to say I’ve left them and made their lives terrible. I will have to hide My face, and they will think I’m not there anymore.” If bnei Yisrael forget Moshe and Yehoshua after many years, who will remind them of Hashem’s love and of His promises?

Just like in court, Hashem knows they will need witnesses!

In a courtroom, witnesses promise to tell the truth, no matter what. They tell the story of what happened so judges can make a fair decision. And two witnesses are way better than one – two trustworthy people who saw the same thing can convince everybody far more easily. But who would be around after Moshe and Yehoshua were gone? Hashem needs immortal witnesses – witnesses who last forever. He chooses heaven and earth – shamayim and aretz. “Write a song,” Hashem tells Moshe. “If there are witnesses, they will believe it; if they have a song, they will remember.” 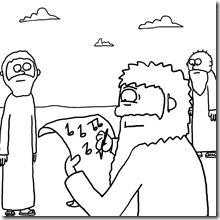 Did you ever try to memorize a very long poem?

Words in songs are easier to remember than words by themselves. One hundred years ago, kids had to memorize poems that might be hundreds of lines long. Because they had lots of practice, it was easier. These days, most children (and adults!) can’t even remember short rhymes. But think of a song you know well, even one with lots of words – maybe your national anthem, or Adon Olam. Hum the song in your head and it’s probably easy to remember the words.

Even the greatest song in the world wouldn’t stop bnei Yisrael from doing aveiros.

Next week’s parsha starts with Moshe’s song and the word, Ha’azinu – Listen!