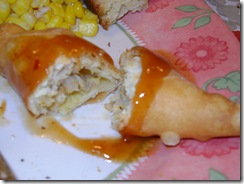 In case you weren’t aware, “potchkedik” means “almost too much trouble to bother.”  Remember that ALMOST!  Lots of steps and annoying and nonsense… but sometimes, very worthwhile.

But at this time of year, my thoughts wildly turn to pumpkin and so I was sucked in by these “Crispy Pumpkin Purses” from Jamie Geller’s site, Joy of Kosher, and decided to make them for erev Yom Kippur.  Of course, as I said in this post, that might not exactly be the best time to savour delicious and effortful food… as my mother said the other day, “we used to just eat a boiled chicken; chicken, and chicken soup.”  Luckily, we now have “extras” in the freezer, so we can enjoy them another time.

These are basically rice-stuffed samosas, with a few nice touches.

The filling is a mix of puréed roasted pumpkin and pre-cooked risotto.  Risotto should be fairly “creamy” when cooked (though pareve).  Because I was making these pareve, I used the non-dairy option of substituting mushrooms for the cheese in the filling.  They would be quite yummy with a bit of curry in the seasoning, and could make a more substantial side dish with some cooked ground beef or turkey stirred in. 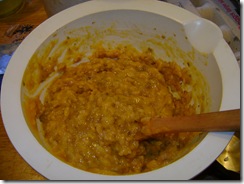 In your “spare” time, make the dough and roll it out nice and thin… thank you, pasta maker for making this step quick and easy!  You could do it with a rolling pin as well, but why not invest in a pasta maker now and amortize it out over the hundreds of times you’ll use it for the rest of your life…???

Excuse me for a moment, while I interrupt this post for a quick pasta-maker salespitch:

I love this tool!  If you love pasta, keep kosher, and can’t find decent ravioli, tortellini, bowties, etc., then you need one of these!  It’s heavy, solid steel – it’ll probably outlast all of us except the cockroaches (except the clamp that came with it, which was made of cheap plastic and broke within the first year – so I bought a heavy-duty C-clamp at a hardware store for $3 that works WAY better).  Also, and I’m not a rabbi, but there is a possibility that because it’s NEVER used for hot or cooked foods, that you could potentially buy an inexpensive used one and simply clean it off and toivel it for use in a kosher kitchen.  I found one on Craigslist for $10 that I bought to use with Sculpey years ago.

Anyway, here it is, with the pasta all rolled out in MINUTES, thinner and more even than you could ever get it with a rolling pin. 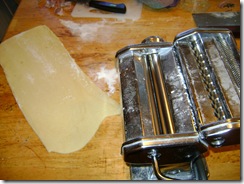 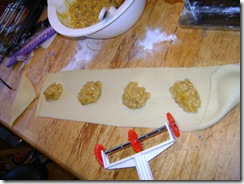 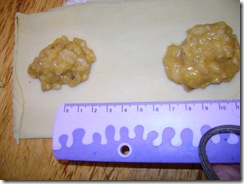 Fold pastry over and cut… 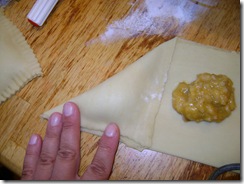 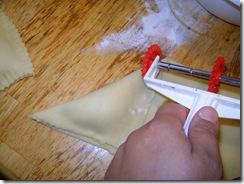 (not shown – seal pastries well with a fork; this roller cuts impressively but does NOT give a good, tight seal) 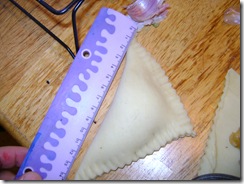 Shallow-fry… these could probably be baked, but I wouldn’t want to risk it the first time around. 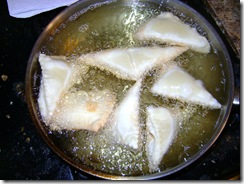 And serve with plum sauce! 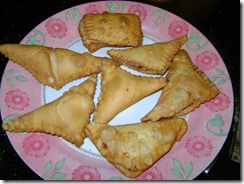 They were quite good… I think they need a little more of a flavour burst, so might try either curry or just more salt / pepper etc next time.