I haven’t posted many of these lately, but we’re still doing them.  Naomi’s illustrations are more of the stick-person variety than the detailed scenarios she was sketching before, but they are still cheerful and fun.  Today, she wanted to write her own narration – I wouldn’t let her for the main narration (you can see my lousy handwriting down below), but she added her own caption on the left-hand side. 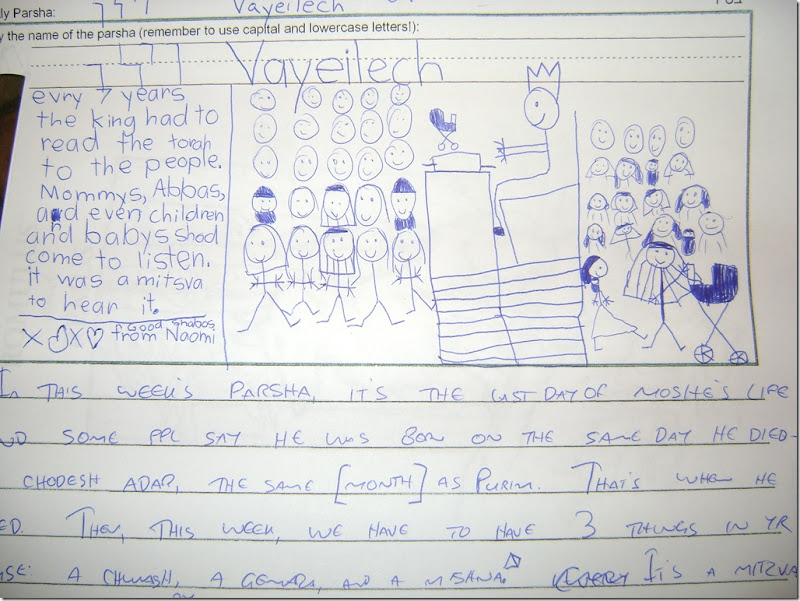 She got the thing about needing “three things – a chumash, a gemara and a mishna” is from My First Parsha Reader, which said every Jewish home needs these things as part of the mitzvah of writing a sefer Torah.  And then Naomi started correcting me and said, “Every sentence must begin with a capital letter [I write in all-caps, but make the first letter bigger]… and end with a pyramid.”  She meant period, but I drew a little pyramid over the period after Mishna, just to be funny.

Anyway, I am SO proud of her handwriting… isn’t it beautiful?!  Her spelling is also much improved, although she’s still a bit lazy sometimes, even with words we’ve done before.  Some words in here would have given her a very hard time, even just a couple of months ago (people, come, listen, hear).  I didn’t correct any spelling on this (babys, shod, evry).  The point was learning parsha, and parsha she has learned.