Okay, nothing to do with anything, but I have loved Dinosaur Comics for a while, and if you haven’t seen them before and have any kind of sense of offbeat wacky sense of humour, you should.  (caution: if your sense of humour is regular, you might not find them funny)

To view a sample, click here.  (warning:  some are less appropriate for mixed age groups and audiences than others)

The super fun thing about Dinosaur Comics (which, by the way, I never share with the younger children, though I’ve been known to show funny ones to the big ones) is that they are all exactly the same.  The six images in each dino comic are exactly the same from episode to episode.  Everything else can vary: the fonts, the script, well… everything you can think of besides those two things.

Here’s the basic layout of every single dino comic. 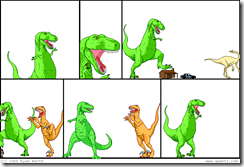 Believe me, the confined nature of the imagery makes the comic just that much more hilarious.  I promise – read a few and perhaps you’ll see… or be so offended you’ll tune out. 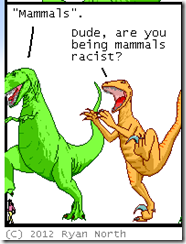 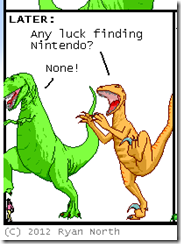 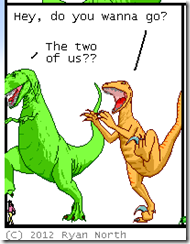 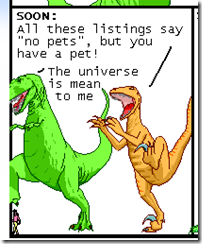 Anyway, you get the idea, sort of.

So today I was looking through some old ones and I had the brilliant and not exactly original idea that the kids would LOVE to fill in their own captions.  Okay, it was evening, everybody was tired, I was trying to write, and needed a way to keep them out of my hair until Ted got home.  But I believe this falls under the rubric of educational things-and-stuff as well.  Not art, as such, and not handwriting or creative writing, as such, but still – creativity; a bit, without much mess.  I think kids will be impressed at how much they think up even with these constraints, particularly at the end of a long day when everybody is on everybody’s nerves. 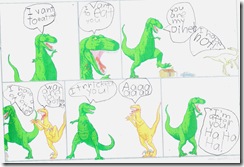 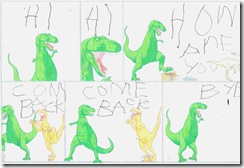 He was chortling and chortling because the green dino says “hi” twice.  I guess he liked it so much he made him say “Come back” twice as well!

Okay, okay, YES, we ought to be working on Rosh Hashanah stuff.   Fer sure.  At this rate… well, never mind.  Yesterday, we visited a historic reconstructed 500-year-old Iroquoian village.  Today we wasted at the Science Centre, but it was fun, and tomorrow, we’re doing some kind of touristy Toronto double-decker tourbus thing with my mother (we’ve been meaning to get to it all summer… and it IS still summer!).  And then… well, the week is practically over by then.

But if you’re interested in passing some time with your kids, here’s a fun way to do it.  Click here to download the blank dinos template (not from my site).  It’s a .zip file with three file formats inside… just save it, unzip wherever you want and print as you see fit (try not to have your printer’s black ink fail as you’re printing or you’ll end up with yucky prints like mine)!

If you wind up with something great, email it to me so I can share it here!!!