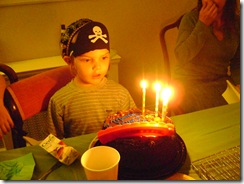 It’s a problem, being born the day after Yom Kippur.  He asked last year and this year when his actual birthday starts, and I said that when he hears the shofar, he’ll know he’s 5.  But by then, most of us aren’t really feeling like partying, though we did attempt some minor gift-giving after the breaking-the-fast meal to accommodate my sisters’ weird schedules.  So this year, we decided to do his birthday beforehand instead, barring any decent Sunday party dates in the near future. 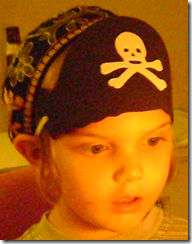 Anyway, the point is, it’s NOT his birthday yet!!!  Why does that matter?  Because we have three more nights of nummies left before he turns 5 and then I’m done for good.  And yes, it’s a sentimental thing, and I think I’ll be okay, but even though he’s a big boy, I think we’ll both miss the closeness.

Anyway, moving on: I love this expression on his face as the cake arrives.  “OMG, really, it’s really MY birthday?!?  It’s happening at last!!!”

He has been talking up and planning his birthday as the Awesomest Day Ever and surprisingly, he doesn’t seem to have been disappointed in the least by the haul despite the fact that I kind of sic’d (sicced?) this date on everybody by surprise.

Both Ted and Sara didn’t have gifts ready yet, but my brilliant sister Sara compensated in the most marvellous way by (okay, this is going to SOUND cheesy, but

really – Sara, if you’re reading this, there was no need to apologize) wrapping up two library books.  It sounds cheesy, right?  But the kids were delighted.  The first, for Gavriel Zev, was the Stephane Jorisch edition of Edward Lear’s The Owl and the Pussycat, a placeholder for the actual gift, which I think will be The Quite Remarkable Adventures of Owl & Pussycat, an Eric Idle (of Monty Python fame) “novelization” of the poem.

Complicated, but the point is – there was a package and he opened it, and enjoyed (briefly) looking at the book inside before being distracted by everything else going on.  For Naomi, there was another package bearing a Pippi Longstocking book (Pippi Goes on Board, I think).  Sara has slowly read two Pippi books with them so far, which is fantastic, because they would never have occurred to me.  I tried to read them as a kid and found them much too weird (though I enjoy listening now while she reads).

Another highlight was a pair of binoculars from my mother.  He has not been asking for them or begging for them or whining for them; what makes his deep desire even more poignant is that he has simply been saying, about a million times a day, “when it’s my birthday and I have my binoculars…”  So now, it’s his birthday and he has his binoculars.  They were a cheapie pair my mother got free with something.  But, though lightweight, they work reasonably well, and the inexpensive gift is balanced by the fact that she’s also buying “him” another Science Centre membership, which costs $100+.  (can’t find any coupon codes as I did last year, so we may have to pay full price :-()

He recognized the crochet-Frankie I made last night INSTANTLY and enthusiastically, discarding the rings from his hands immediately and without a second glance.  This Frankie had written a note to GZ, and Naomi read it aloud because GZ was deep into an “I can’t read” act.”  He promptly announced that the “original Frankie” was lost – despite his having been seen over breakfast – and that this was the perfect replacement.  I suggested that the original might someday be found and that they could play together. 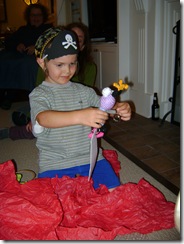 (when we got home, the original WAS found, and the two DID play together, albeit a little wildly, at bedtime)

But in my mind, the crowning glory was this amazing superhero cape, handmade by an awesomely talented friend and her sewing machine.  Not only is this cape the perfect size and fit, but… 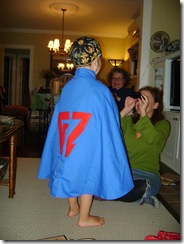 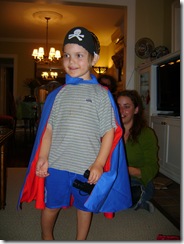 It perfectly matches the Spiderman pyjamas he got last week for Rosh Hashanah! 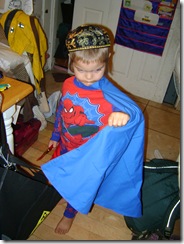 A trip down memory lane:  4 years ago this week… 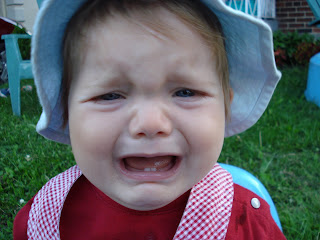 And here’s the Big Birthday Boy today with all his swag – binoculars, foam pirate cutlass and hat, Frankie, cape and all. 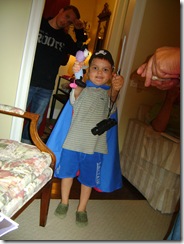 The best non-stuff gift of the evening was the prize of walking home alone with Yerachmiel Meir!  GZ is always looking for ways to prove to YM that he’s not a baby so they can do stuff together, and now, nearly five years later, it was sweet to see the two of them heading off into the (well, post-) sunset of the evening.

It’s been a long five years.  Lots of talk of death over the supper table, me and the littles having come home from visiting graves (or, as I call them, “our quiet relatives”) this afternoon.  To me, that’s not creepy – home is where birth and death and everything in between (including birthday parties) belongs.  I love having thoughts and memories of my grandparents, of my father, present with us at the meal – not in a grim way, but in the happy way that evokes the memorable moments when they were alive.

The first cemetery we went to actually had a Día de los Muertos (Mexican “Day of the Dead”) feel to it.  Not exactly picnics at the graveside, but people coming and going, adults and kids, talking, joking, leaving stones here and there as they passed.  Naomi looked around at the big open field and said, “there sure are a lot of dead people!”  There sure are.

The other cemetery, more upper-class, was also more subdued.  As if proving the rich have all the advantages, even after death, you don’t have to stoop and hunt for stones there, because they have waist-height cement bowls (like an ashtray, if you remember what those were) full of nice-looking stones.  So we took a bunch of stones and traced our fingers over the names of the family members and visited my father, as he asked me to four years ago (how surreal).  I saved the apple trees for last, and there was actually only ONE apple out of two trees – how pathetic.  It was red outside and reddish-pink inside.  Gavriel Zev said it was sour, but he ate the whole thing.  As for all the advantages, I realized as he was eating it that he should wash first, but for some mysterious reason, the water-taps were shut off – even in the hoity-toity cemetery. 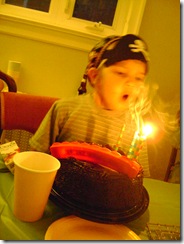 To me, these moments are good openings for any number of conversations.  We have read a little about World War II now, so I mentioned how lucky we are to have known our grandparents, to have graves to visit – my father never had that comfort for all the relatives Hitler killed.  Naomi said Hitler sounds like “hit,” so I told her that would make it very easy to remember just how terrible a leader he was.

I guess this is an overly contemplative ending to a post about my son’s birthday, his happy, surrounded-by-family transition into the World of Five.  But it’s a big transition, and somehow, I feel it all fits together:  the graves, the cape, the binoculars, the big brother.  It’s all just part of belonging in this world, and if there really is an age when people start to truly Belong, to figure out this whole stew of happy and sad, the narrow bridge we’re all crossing at every single moment, it’s Five.