Remember from last week – all of Devarim is one long speech by Moshe in the last five weeks of his life.

This week, Moshe starts with a story about himself. He desperately wanted to go to eretz Yisrael, so after defeating Og, he begged Hashem to let him go, until Hashem said not to ask anymore. We sometimes think a bossy person is a great leader – someone to shout, “Go this way, not that! – Don’t do this! Do that!” But Moshe was a teacher. Instead of bossing, he said, “here’s what happened to me – let’s find out what Hashem meant.” That’s a Jewish kind of leader.

Now, Moshe tells us something very important: keep the Torah!

Wait a minute! Hasn’t he said this before, many times, in many ways??? But the important part here is to keep the Torah – nothing less, nothing more. Think about tzedaka. The Torah tells us to give money to help other people. You can’t say, “I won’t do that,” of course. But can you say, “Wow! Hashem loves when I give tzedaka… Maybe I’ll give away ALL my money!”? No, you are not allowed! We must never take away rules from the Torah OR make up new ones.

Now, bnei Yisrael must have felt pretty special after all this time in the midbar!

Hashem did things for them He never did for anyone else in the history of the world – rescuing them from Mitzrayim, feeding them man, protecting their soldiers. “Did anyone, ever, hear Hashem’s voice and live?” Moshe asks. Of course not! They were special, but he warns them to be careful and never forget the One who made them special – Hashem.

Maybe they thought they deserved something special after how the Mitzrim treated them.

Danny always loved going to the dentist because he got to choose a prize after his visit. But one day, he went with his father. It was a long appointment, his father seemed uncomfortable, and Danny noticed his father didn’t even get a prize at the end of the appointment! “Why do I need a prize?” his father said. “The dentist visit is my reward – now I’ll have clean, healthy teeth!” 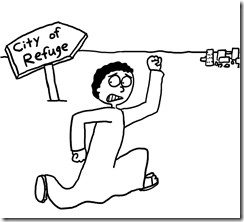 Here’s a different way to think about it. In those days, to get the best, purest gold, they’d melt regular gold in a burning oven and pour off the best part. Like a burning oven, like a dentist appointment, slavery was bad, but Moshe tells bnei Yisrael it actually helped them become pure and strong, and they must remember all about it to stay strong. Moshe also reminds bnei Yisrael about the עָרֵי מִקְלָט / arei miklat (cities of refuge) for accidental murderers, telling them where to build three on the east side of the Yardein. They’ll build three more later, in eretz Canaan.

Now, we all stand up. Really! Well, in shul we do.

In shul, this is where we read the עשרת הדיברות/Aseres HaDibros! Aseres (עשרת/Aseret) means TEN. Dibros (דברות/Dibrot) means SAYINGS or MESSAGES. Please look back at Parshas Yisro to see what these ten important messages were. This week’s parsha repeats them almost exactly the same way, but when it comes to Shabbos, parshas Yisro says, “זָכוֹר אֶת יוֹם הַשַּׁבָּת” – REMEMBER the Shabbos day. Now, it says שָׁמוֹר אֶת יוֹם הַשַּׁבָּת – KEEP the Shabbos day. Which one did Hashem say when we stood at Har Sinai? Some people think He told us both words at once! That would be impossible for a person… but definitely possible for Hashem.

But if you thought the Aseres HaDibros were important… 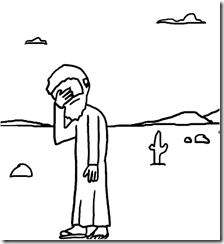 The next thing Moshe teaches us is the one tefillah that most Jewish people know, even if they haven’t learned very much about Judaism at all: the Shema. (Can you say it?) The part that says “בָּרוּךְ שֵׁם כְּבוד” isn’t in this week’s parsha, so the next section, that starts וְאָהַבְתָּ / ve’ahavta, comes right after the Shema part. If you say that section, you’ll notice how many times the words end with ךָ / “cha”. Each time, that means YOU – Hashem is speaking directly to you.

This parsha is full of warnings. It’s easy to see why!

Moshe is worried that bnei Yisrael won’t keep the Torah once he is gone. Imagine a rowdy class of kids – they are not behaving well at all! Whenever the teacher turns away, they jump, throw things, run outside, slide chairs around.

Would that teacher want to leave the room, even for a second???

Ever since Moshe came to tell bnei Yisrael he was taking them out of Mitzrayim, they have been kvetching and behaving badly – fighting with each other, speaking loshon hora, marrying the wrong people. You can see why Moshe warns them over and over to hold onto the Torah and not let go, even for a second, especially in eretz Yisrael.

But even Moshe came to trust bnei Yisrael eventually, right before he died.

In a few weeks, we’ll read parshas Nitzavim, where Moshe says, “כִּי קָרוֹב אֵלֶיךָ הַדָּבָר מְאֹד,” keeping the Torah is very close to you – very easy if you’re really trying. We just have to remember what makes us special – Hashem. Moshe reminds us that we’re all His עַם סְגֻלָּה, His treasure, and He wants to be with us, through His mitzvos, forever.

We’ll learn more about some of the beautiful things that happen if we remember Hashem in next week’s parsha!