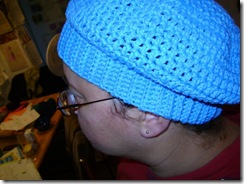 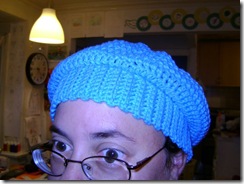 I’ve made myself several hats since learning to crochet back in January, but this is a new design and I’m particularly pleased with it.  Although it’s double crochet, I used a thicker yarn than usual (Lily Sugar & Cream Solids in Hot Blue), which means it actually covers my hair.  I normally keep my buff headcover (tichel) on under hats, so it’s not a problem, but this feels light and comfy so far, so it’s nice to have options. 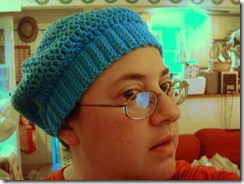 Here’s a link to the free pattern on Ravelry, in case you’re interested.

And here’s a picture of me, giving my best “I know you are up to something” grimace.  I’m sure you’re NOT up to something, but I was peeved because I handed the camera to Ted, he took an awful picture of the back of my head, then handed it to me and walked away, leaving me to try to photograph the back view.

So this is more like the gaze of disbelief after my unpaid craft photographer has up and quit on me.

The photographs were not just for vanity, but actually also a kind of tznius test:  if the flash lights up the entire surface of the hat and my hair is still not visible (other than just an overall darkness under the hat), then I consider it sufficient for headcovering purposes.  Don’t ask about the sides and back, however.

I used to be more makpid about those flyaway bits, but have learned to live with wisps and fluff around the edges because my hair is just nutty that way.  As I told my great-aunt in Israel, “ha-se’ar ya-oof.”  Which I thought meant “my hair flies,” but probably means something closer to “the hair becomes a chicken.”  I almost added, “k’mo laytzan,” like a clown, because in English, I call it my “clown hair.”  I thought better of it, given that it was our first meeting.

I’m sure I’ll do really well in Israel… really, I will!