Frog Prince for Mary – and why

Sunday afternoon, I realized the kids were leaving without a gift for my wonderful mother-in-law in Calgary (here are my pics from her garden, 3 years ago).  The sad part of losing touch is you never know if people are into the same things as they were way back when… but when I saw this froggie prince, I thought it might be perfect.

After many years single, she’s married to the princeliest frog (or froggiest prince) you could ever hope for, a gentleman, linguist, artist and “Grampa Mikey” to my kids since YM was about 1.

He was a quick project, really just the afternoon and part of the evening: 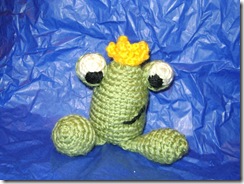 The side and top views are a little strange, but shown here so you can see the gorgeous workmanship. ;-) 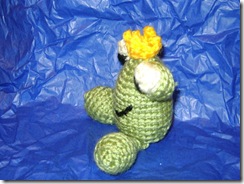 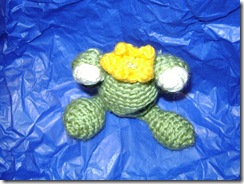 Actually, I wasn’t sure if she’d like him, so took extra trouble to make him baby-safe so he could be passed along to a younger relative if she preferred.  That mostly involves sewing the eyes instead of buttons or doll eyes, plus sewing back and forth extra times to secure the legs and eyes.  Here’s the (free!) pattern on Ravelry (and a link to my profile to see other projects), if you’re interested.

It sure is fun living in a big divorced-and-remarried extended family!

My ex-husband’s parents divorced when he was a kid, and now they’re both remarried.  Then, we divorced and I remarried, giving the kids, in theory, EIGHT grandparents.  The big kids father’s father is “Grandpa,” and his wife is “Grandma Carole.”  Their father’s mother is “Grama,” and her husband, as I mentioned, is “Grandpa Mikey.”  Originally, Mary just called him that to tease him, because he was a youngish 40-something when they got together.  But now he’s in his late 50’s (early 60’s?) and has grown into the title beautifully.    Ted’s parents are “Granny” and “Grandpa,” but there’s no confusion because the big kids don’t see or speak to him much.

Everybody always asks me how they all get along.  The short answer is – thank God, we’re all adults.  Everybody has remained civil throughout.  At one point, I took this for granted, but now I’m astonished because I’ve seen so many families split apart and so many kids suffering through ridiuculousnesses like multiple bar and bat mitzvahs.  So many families not speaking to one another – Ted sees them every day at work also, families who won’t give up grudges, even after death.

For YM, we made one bar mitzvah.  Anybody who wanted to could come.  Well, okay, we did TWO bar mitzvahs, but only because one was the bo bayom (on the actual birthday) and one was the closest Shabbos we could book at our shul.  And okay, in fact, one grandparent could only make it for one date and the other for the other, so they were NOT at the same bar mitzvah… but they could have been, and that’s what counts.  And some of Ted’s family came in as well and mingled with my family, the kids’ family… we’re ONE family. When YM was born, his long-divorced grandparents had matching sweatshirts made with his picture on them.  They wore them on the plane to come see us in Toronto.  They stayed for a week in our small two-bedroom apartment.  It was all very civilized.  But really, that should be the RULE, not the exception.  A divorce really isn’t just between one couple… the effects, good or bad, ricochet through the generations.

Which is a lot to say about one little frog, really… but I hope it explains why this was so important (doesn’t explain why I did it at the last minute Sunday, though!).

What lengths do you go to for the sake of peace in your family???