Do you remember? Sefer Devarim is one long speech by Moshe in the last five weeks of his life.

Moshe starts this parsha by promising amazing brachas if bnei Yisrael keep the Torah in eretz Yisrael! Their children, their animals, their fields – everything will grow bigger and better and healthier. They will live very long lives. And enemies who try to attack will fail – Hashem will protect them in every way.

A very famous expression comes from this week’s parsha: “Man does not live by bread alone.”

When old books say “man,” they don’t mean only one person, or even only men. “Man” means “people.” But wait! We know people actually CAN survive just by eating bread (though they might not be happy about it). Where does that bread come from? This parsha reminds us that whatever we eat, whatever helps us, comes straight from Hashem.

In Mitzrayim, even today, farmers must water their fields (which river does the water come from?). But Hashem is always watching Israel, and if bnei Yisrael keep the Torah there, rain will water everything – automatically! If they stop keeping the Torah, the rain will stop, and nothing will grow. With no water and no food, they will die.

Some of them grow in other places, but ALL of them grow in eretz Yisrael, and Moshe lists them to show what a good and special place it is: wheat, barley, grapes, figs, pomegranates, olives and dates. Wheat and barley are for making bread. Grapes, figs, pomegranates and dates are sweet treats. Olives are tasty soaked in salty brine, but they can also make oil – remember the story of Chanukah? Israel is אֶרֶץ זָבַת חָלָב וּדְבָשׁ / a land “flowing with milk and honey.”

With all that food growing, Hashem promises that if bnei Yisrael keep the Torah, they will never go hungry. But Moshe reminds them that when their bellies are full, they must still thank Hashem.

Were you ever desperate for something to eat or drink?

Shmuli and Clarence were out playing one day when Shmuli got so, SO thirsty! “Please – give me a drink from your water bottle!” he said. But Clarence didn’t have much water, and didn’t want to share it. “I’ll pay you,” Shmuli said. “I’ll give you a dollar.” Clarence said no. “Two dollars!” Finally, he let Shmuli drink, and afterwards, Clarence asked for the money. “No way,” Shmuli said. “Why should I pay you? I’m not thirsty anymore.” When you are hungry or thirsty, you’re grateful for anything you get. But when you’re done and you’re stuffed, it’s easy to forget how you felt before you ate and drank. We have to remember – we still owe Hashem everything, even when we’re finished eating.

One way of thanking Hashem after a meal is called Birkas HaMazon – bentching!

Remember all the kvetching bnei Yisrael have done since they left Mitzrayim? Moshe calls them a funny insult – he says they’re an “עַם קְשֵׁה עֹרֶף” / in English, a “stiff-necked” nation. A person whose neck is stiff can’t turn his head to see anything besides what’s right in front of him. He can’t see where he came from or anything on the sides. Bnei Yisrael think they are big tzaddikim, but they “forget” (kind of on purpose_ the things they don’t want to think about – how they did avodah zarah, married the women from Moav, worshipped the eigel hazahav, the golden calf. 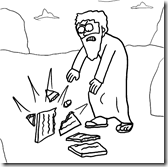 Moshe reminds them – he was so angry, he smashed the luchos!

He says, “you have been rebelling against Hashem since the day He sent me to Mitzrayim.” Every time bnei Yisrael did something terrible, Moshe has begged Hashem not to destroy them. And He didn’t – even when Moshe broke the luchos, the most valuable thing they had, Hashem forgave bnei Yisrael and gave instructions to make a new set.

“Please, please,” Moshe begs them, “get rid of those stiff necks.”

“Look around,” Moshe says. “Look at everything Hashem has done for you. Look back at Mitzrayim; see all the nations scattered at your swords. You didn’t do that for yourselves – Hashem did it all for you!”

What does Hashem ask in return for everything He’s done?

Moshe tells us: “fear Hashem, walk in His ways, love Him, daven to Him, and do His mitzvos.” Wait a minute! Fear Him AND love Him??? Well, yes. Do you like having lights in your room at home? Probably, because they let you read and play, even at night. But did you ever stick your finger in an empty lightbulb socket or outlet? I hope not! The electricity in there is so powerful it could kill you. You really should be afraid of electricity, but it’s okay to love having it around as well! When parents spank or punish children, the children might be afraid… but never stop loving their parents.

Moshe is the only teacher bnei Yisrael have had so far.

But new “teachers” are coming, and they’re not always honest… as we’ll see in next week’s parsha!