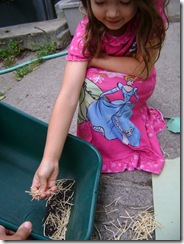 (dropping the G because by no means could this be considered ~real~ farming!)

One weekend last spring, I planted kale with my sister Sara… and then left it.  We ate some, but not much.  Having survived the winter due to exceedingly mild temperatures, this spring, it started shooting upwards… and I left it.  And left it.  It grew tall; gigantic.  And it flowered – understated little yellow flowers that attracted a gorgeous multitude of butterflies, wasps, bees, and other pollinators who are smarter than we are so they can see through the lack of over-the-top beauty in a kale plant. 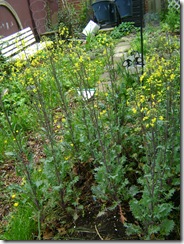 And then… well, there is a reason things are said to have “gone to seed” when they get bedraggled and faded-looking.  As the flowers dropped off and the seed pods grew, the plants started looking TERRIBLE.  And I left them, watching the pods elongate and finally, turn brown and crispy as the plants gave up the ghost.  On Friday, before Shabbos, because they were (wrongly!) predicting rain, I cut them down and stashed the stems inside the backyard playhouse.

And today, we saved the seeds!  At first, by vigourously shaking the pods over a dish basin in the backyard, but evolving to a technique of stripping them over a large piece of bristol board (oak tag) I had hanging around.  I explained how with some grains, this step was traditionally done by beating the sheaves, which provided the necessary vigour to split the pods.  I have to admit that even with the “evolved” technique, we were not the most efficient farmers, scattering little round black seeds all over the driveway.

Afterwards, we did a little “winnowing” step of shaking the basin to make the chaff rise naturally to the top.  I didn’t really explain – wish I had – how the seeds-n-chaff could be tossed in the wind (by a more expert farmer than I), letting the wind take the chaff while the seeds fell gracefully back down.  I didn’t trust myself not to toss seeds every which way and just lose them all.

Here’s what we ended up with once most of the chaff was gone.  Naomi continued to pick bits out until they were pretty clean. 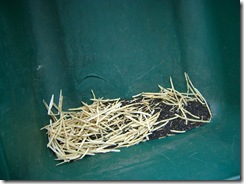 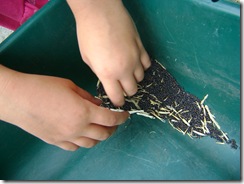 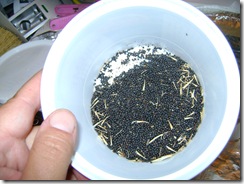 I plan to use a few of these myself and bring the rest to the local Seedy Sunday seed swap event where I’ve volunteered for the past three springs.  They bring little envelopes, and even though this doesn’t look like a LOT of seed, a little goes a long way.  We only put about half a teaspoon in each envelope.  They are basically given away – the community centre where they have the swap is in a public-housing area where people don’t have much money, and really what you’re hoping for is that by realizing ordinary gardeners CAN save seed, folks will take the free seeds, go home, plant them up, save the seeds and bring them back the following years.

It doesn’t always work.  Heck, it doesn’t even work OFTEN.  I’m sure many people try to grow the seed and fail, or succeed in growing, but “forget” to save their own seed.  But it’s fun being able to give something away free anyway, something you know they’d have to pay several dollars for in a garden store.  Plus, I always tell them that plants grown from local seeds are more likely to enjoy growing in their own soil and climate, unlike garden-store seeds which are grown in California or BC or goodness-knows-where and don’t love our Toronto soils.

Anyway – I love seeds, and seed-saving.  And given that I’m not really doing much gardening this year (because we’re making aliyah next year, it doesn’t make sense to buy plants or invest much time or energy on long-term planning), it definitely feels good to be sharing an actual farm-type task with Naomi Rivka.

The pleasant surprise of this exercise was the SMELL of the dry-brown stems.  I wasn’t expecting them to smell like anything, and if you’d asked me, I might have guessed something akin to broccoli.  But they actually had a distinct hay / grass smell, almost like the sweetgrass of the prairies. 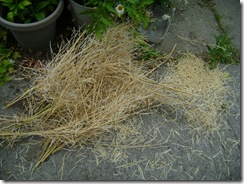 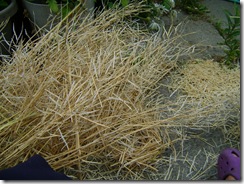 When I was little, my uncle brought me back (from Western Canada, I believe), a sweetgrass basket that had the most amazing smell.  I would keep it closed and open it up to take a deep whiff – bringing the experience of the prairie into my life in the same way that listening to a seashell transports you to oceans unseen.

Later on, when I was living in Calgary, when I went for drives in the country – heading east, into the prairies, not west, to the mountains – I noticed that it smelled like sweetgrass, all around.  I don’t know if that’s what was growing, but the smell of it was everywhere.

The kale stems were not quite like that.  But they had the most amazing, sun-drenched, grassy and wholesome smell you could imagine. Meanwhile, it did NOT rain on Shabbos, and though it is threatening to today, the probability is still only around 50%.  In Israel, maybe you don’t expect rain in the summer, but here… well, it’s a certainty, sometimes at the most inopportune times, and this is the driest I can remember seeing Toronto.  I can’t even remember the last time it rained, and every lawn, every park, every stretch of Kentucky bluegrass that hasn’t been watered has gone to sleep – crunchy and brown. 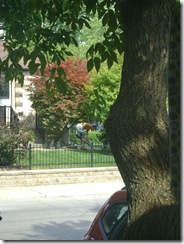 Meanwhile, across the street is this little oasis of green, where my neighbour refuses to let his grass “die” (botanical note:  it’s DORMANT, not DEAD… it’s trying to sleep through the heat; it’s a survival mechanism) and has this obnoxious spinny-sprayer that tosses more water into the air than actually arrives on the ground.  He also insists on mowing the lawn to an OCD-level perfection (ie 1”, military-haircut style), and then running around with this obnoxious dentist-drill-sound blower for an hour gathering up the clippings.

Ah, life in the ‘burbs… on our pathetic little urban farm.

Am I the only one who’s all but given up on gardening in this heat and dryness???