As I seem to say often, this craft is a little late for this year, but on the bright side, it’s WAAAAAY early for next year! 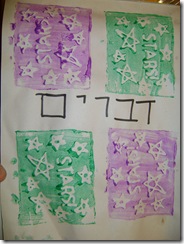 “G-d has multiplied you, and look – now today you are as many as the stars in the heavens.”

Inspired by Creative Jewish Mom, we had some friends over to help us recycle some styrofoam trays (they came with corn on the cob, which is the worst way to buy corn (shrink-wrapped from the US – ugh!), but the best way to get styrofoam trays because there’s no concern about washing off meat or fish residue!

I have tried stamping with styrofoam before without much success, but she offers the tip that you MUST use a “thin coat of not-runny paint,” and I ran with that and discovered that I have always used too much paint in the past, and sometimes watered it down too much.  Just a thin layer of full-strength paint, right out of the bottle, painted onto the stamp, is exactly the right thing for a nice, delicate print.

It took me about 15 tries to get the four good stamps on the page at the top here. 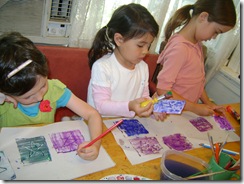 In keeping with Moshe’s bracha that bnei Yisrael had become like the stars of Shomayim, I thought stars would be a good, basic shape for the kids to carve out with regular pencils in their styrofoam blocks.  Also, sometimes it’s useful to limit kids’ creativity by giving them an assignment rather than telling them they can create anything they want, which usually takes MUCH longer and sometimes gets a little unfocused.  With the younger kids, I drew the star and let them go over it to make the lines deeper.  With GZ, I actually drew AND deepened his lines – he wasn’t into that part of it… he was more into the making a mess part. 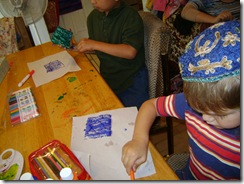 They all did pretty well with this, and most of the stamps looked terrific.  Although this isn’t a “compost-bin” craft, ie one you can toss in the backyard composter when you’re sick of it, I do like this craft because they can actually take the styrofoam bit home and reuse it whenever they want… in theory.  In practice, at least the styrofoam is out of my house. 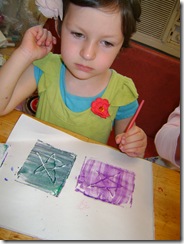 And it’s always nice to have friends come over to play… even for me!  Okay, especially for me.  For all of us. 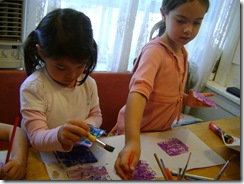 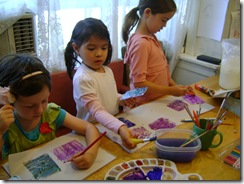 Another thing I like about this craft, thinking about it retrospectively, is that kids get out of it what they put in.  If they put in effort and do it carefully, they get a beautiful result.  Although I said they shouldn’t use text on their stamps (remember to write it in reverse if you do!), Naomi was quite pleased with her intricate stamp (it says “Jewish,” for some sweet reason).  Gavriel Zev didn’t put in as much effort – as I mentioned, he was more interested in slopping a lot of paint around than seeing the actual print, though it was kind of magical how the magen david showed up anyway in his picture (on the left); it shows up darker because lots of paint had pooled in the grooves. 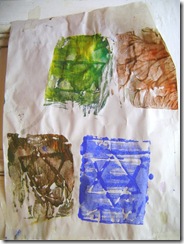 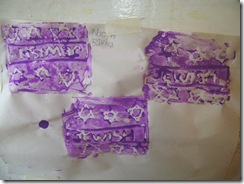 Also, perhaps inspired by a JUMP Math teacher workshop I attended a couple of weeks ago, partway through the introduction, I told them it wasn’t a “baby craft,” and that they would have to work carefully if they wanted any results at all.  One of John Mighton’s things when he’s teaching a math class is that he shows confidence in the kids and tells them he knows they’ll be able to do certain problems or questions, even when they haven’t had success in math at all previously.  Especially then, when they might never have heard the words “you’re pretty smart” ever before.  Because what he’s learned is that they live up to expectations, whatever those may be.

(Okay, the phrase “you’re pretty smart” horrifies me on one level, because much of what I’ve read says you’re supposed to make both praise and criticism about the child’s behaviour and NOT about the child him/herself.  Like, “you did this one really well,” not “you are a good boy.”  But I can see the virtue of what he does as well, and the fact that he says it naturally and honestly makes up for any pedagogical flaws, I think…)

So!  I won’t be updating between now and Tisha b’Av, so I’d like to wish all of you an easy fast, a fast fast, and a meaningful fast - a phrase which, I must admit, sometimes irritates me, with its implication that some of us are merely hungry while others of us are on some higher spiritual plane.  Okay, that part is true.  But they don’t have to rub it in!!!

Have the best possible fast and we’ll see ya on the other side!