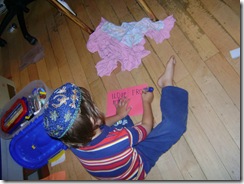 Remember my kid who picked up a marker for the first time last September, after steadfastly refusing to draw or write anything whatsoever, even a scribble, for the first 4 years of his life???

Today was his friend’s birthday.  I asked him what colour he wanted and gave him construction paper, folded card-style.  He sat down.  He made a card.  Done!!!

Thank you, Handwriting Without Tears!  I don’t know if that’s what’s made the difference, of course.  He probably would have gained some confidence on his own.  Many of these letters we haven’t even covered in HWOT.  But I really do believe that regular handwriting practice has given him the confidence and (if nothing else) sheer marker-holding skills to be able to get his true feelings down on paper.

He said, “I want Daniel to know who it’s from without having to ask.”  (yes, he’s spelled his name wrong – we’re working on it!) 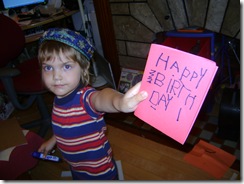 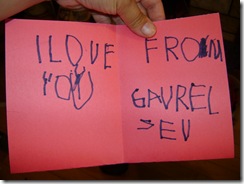 I offered to spell some of the words for him, and for the first time, he accepted the assistance – he was 100% confident about everything but the “ir” in birthday, because he got that wrong (used an e) last time he tried to write a card.

Which is, by the way, is why he didn’t write until he was 4 years old.  As a perfectionist, he notices mistakes and remembers them.  They bother him, in a deep, deep way.  And as a beginner, he knew that anything he’d attempt to write would come out looking like a “mistake.”  So he just decided he wouldn’t try until such time as he could do it properly.

Ask me how I know all this.  ;-)  My mother swears my first words were spoken in a complete sentence; I never baby-talked.  But that is apparently a failing when one is planning to immigrate to a place where they speak a different language.  It’s better, obviously, to speak BADLY but have the courage to open your mouth – so you keep improving! – than wait mutely until you can speak like a native.  That’s why Ted’s going to do just fine in Israel, I’m sure, while I’m secretly flailing.

But enough about me!  What do you think of my kid???