Both littles were off in camp last week – multi-sports camp for Gavriel Zev, and gymnastics camp again for Naomi Rivka.  Apparently, another girl offered to teach Naomi Rivka some French, so I suggested she could share a little of the Hebrew she knows.

So she sat down and wrote a dictionary! 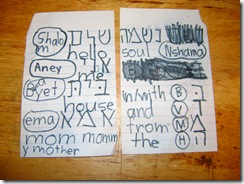 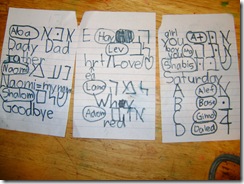 I especially liked her little section of prefixes:

Thank you SOoooo much, Leshon HaTorah and Bright Beginnings!  Dikduk may sound dull, but I am really thrilled that she’s getting such a solid foundation.

Oh – in case you don’t know, because I didn’t!  Dikduk = דִּקְדּוּק = ”grammar”, from the same root as bediyook / בְּדִיּוּק, meaning “precisely.”  Another word:  a medayek (or medayekes), in today’s yeshiva-Yiddish, is a careful person.  Perhaps in Hebrew, too.  Finally, medooyak / מְדֻיָּק means accurate or precise.  Adding “b” on the end turns it into an adverb – exactly, precisely.

Dikduk is an important word, if you’re ever going to have kids, especially girls, in frum schools.  Perhaps Israeli schools as well.  None of the subject names were quite what I expected at first.  Navi, I could understand (prophets), but what was “safa”? (lip = language, though in Hebrew, the word lashon, tongue, also means language, as in English)  Historia was okay (Jewish history), but what the heck was “dikduk” (see above)?  Biur tefillah I could figure out (prayer), but “bekius”?  (turns out, in a girls’-school context, it’s Chumash or Tanach in breadth…kind of anti-parsha, where the focus is on knowing what’s in each sefer / book, but not necessarily all the nitty-gritty details)

I guess that mini-vocab/grammar lesson was a bit of a diversion from the cuteness of Naomi’s little dictionaries.  In the end, I think she didn’t give them to her friend… and I suspect she didn’t learn much French, either.  And tonight, our neighbour asked her how her Hebrew was, so she said “actually, it’s pretty good.”  So he said “shalom, ma nishma?”  (hi, how’s it going?) to which her response was – um – she giggled.  She knows a bit while she’s using Rosetta Stone, but it all seems to evaporate when we’re in the real world.

But you know what?  I’ve stopped panicking.  Because I gradually came to a realization that once we’re over there, the little kids will learn Hebrew faster than we could possibly imagine.  That doesn’t mean I’ve stopped trying to teach Hebrew, but I’ve realized that there is basically no way I can mess it up.  God willing, they will be teaching us Hebrew before we know it and then the tables will be turned as they watch our painful, giggling baby steps… I can only hope they will find ours as cute as I am currently finding theirs.