This was a first for me, though they are apparently popular in the non-Jewish world, known as either Jello Jigglers or Knox Blox, depending on which brand of gelatin you use to make them.  Also, I think knox blox are sometimes made with pure fruit juices, which I guess makes them a totally healthy alternative, which mine weren’t.

I used four packs of Kolatin kosher gelatin dessert (comparable to Jello, and the only brand that uses real gelatin – don’t ask me how or why it’s pareve…), two of cherry and two of lime (but you could mix-n-match any flavours you like!), mixed with 2 1/2 cups of boiling water (the package directions call for 2 cups of water per package, so this is just over 1/4 the total water of the regular recipe).

I let it sit overnight.  In the morning, it was WAY firm and ready to press cookie cutters into.  I sprayed the “sharp” edge of the cookie cutters with a bit of oil because I didn’t want any trouble with the letters not releasing, and most of them popped out just fine (I also lined the inside of the pan the Jigglers set in with plastic wrap so they’d slide out of the pan very easily…). 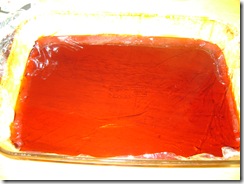 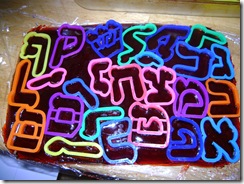 (it looks like there’s a gap in the middle-left, but actually, I stamped one zayin there and then moved the zayin over to maximize all the available space)

And here they all are! 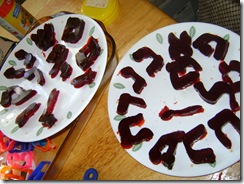 Mostly, the jigglers were a hit.  All the kids picked them up and squished them around a bit, but a couple couldn’t bring themselves to actually eat them. 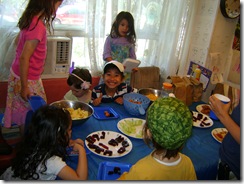 If you’re interested in trying it, this site has recipes for various Jiggler variations, including creamy Jigglers.  One nice thing about using cookie cutters on the Jigglers is that whatever scraps you have left over can be melted in the microwave, then re-set in a smaller pan.  I just cut those leftovers into squares and we’ll probably have them for a snack tomorrow.  But even though you don’t get many when you stamp them out, ultimately, there’s no waste, so I approve.

The party itself was GREAT – mostly because not too many kids came.  Maybe five kid-friends, plus a baby, plus my mother and another “older-lady” friend, plus some mommies and one abba.  Very manageable crowd; just the way I like it!

Elisheva drew a giant “pin the alef on the aryeh” game on a big piece of green bristol board (oak tag, for folks in the US), and I printed and cut out an easy alef-bais Bingo game from chinuch.org here.  There was also an alef-bais grid drawing “game” (on a big bristol-board-sized grid, kids roll for a number across, then down, then draw something for whatever letter appears in that square of the grid) that created a cute poster, though because there weren’t many kids, we still have to fill in a bunch of pictures ourselves that didn’t get drawn by friends during the party.

We also made alef-bais cookies and watched GZ’s alef-bais video while he refused to sing his alef-bais song for those who had come to the party.

All in all, a successful day!  We made another party for my mother’s birthday in the evening, for which I slaved all afternoon making fresh pasta bowties and my sister slaved making a luscious chocolate-whipped-cream-and-cocoa-nibs-strawberry-crazy-stacked-up-cake, and then, in my exhaustion completely forgot to take even a single picture…  blah!

Did I mention I have a killer cold???  Didn’t think so… I didn’t mention it at home, except a few times to my sisters.

Cuz if you can’t complain to your sisters, who can you kvetch to???